Most of us are probably using Chrome on Android — after all, it's pre-installed and syncs everything from active tabs and history to passwords and bookmarks between devices. However, the Play Store is filled with dozens of alternative browsers, and Samsung's Internet app is perhaps the best you can find. It bundles a ton of features not available in Chrome in its settings menu, many of which are surprisingly helpful. Samsung Internet 15 is now in beta, and while you won't see any visual refreshes here, it does include several security enhancements.

Privacy has become a major priority over the last few years, even for those who aren't following all of the latest tech news. With that in mind, Samsung is building two new features into its browser to help shield its users. With Internet 15.0, the app now sports "anti-tracking technology," which protects against fingerprinting while browsing. Meanwhile, the "Delete browsing data" menu has been expanded, giving specific examples of what each option clears. 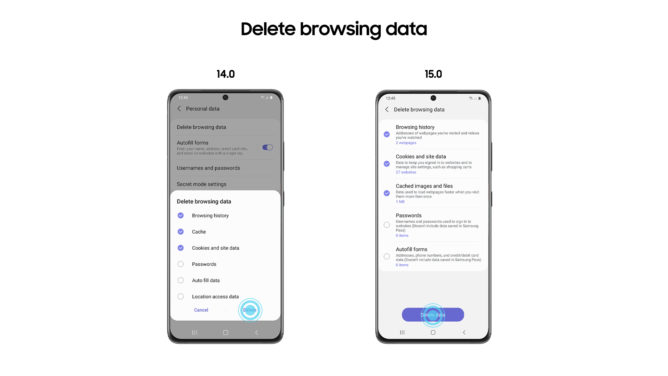 Samsung has also changed how Secret mode (its version of Incognito mode) works. Once Secret browsing is turned on, it'll stay the default until manually switched off, rather than returning to its normal state each time the app is opened.

It's not just a privacy-focused update, though. A new search widget is now accessible from the home screen, giving you easy access to whatever search engine you've selected. It's easily resizable and looks a lot like Google's own search bar, complete with a shortcut for voice actions. Finally, this latest beta temporarily caches and stores web pages you've recently visited, so the app should use less data while navigating back and forth between links.

Samsung says a stable version is on track for late summer. If you don't feel like waiting, you can download the beta using the Play Store link below or grab the APK from APK Mirror.