I've had the same phone number since Google Voice launched back when I was in college, over a decade ago. I've moved (lemme think) seven times since then, and not a single person I still know is calling me from the Bryan-College Station area. So when spammers copy my area code in a lame attempt at engagement, I only answer the phone if I'm in the mood to waste time and mess with some criminals.

I've been waiting literally years for someone to offer me an easy way to block all numbers that start with 979, and I didn't think Verizon would be the one to deliver it. But here we are: Verzion's updated Call Filter filter app is allowing users to block all incoming numbers with an area code and following three digits that match the user's number. It's an increasingly common tactic from spammers who are spoofing numbers, trying to appear like they're someone in your area or even on your shared phone plan.

This is a free upgrade to the carrier's system and doesn't require the $3 a month add-on for even more features, though those users can add up to five extra area code number filters to the list. Individual numbers can be allowed to pass through the filters if necessary. 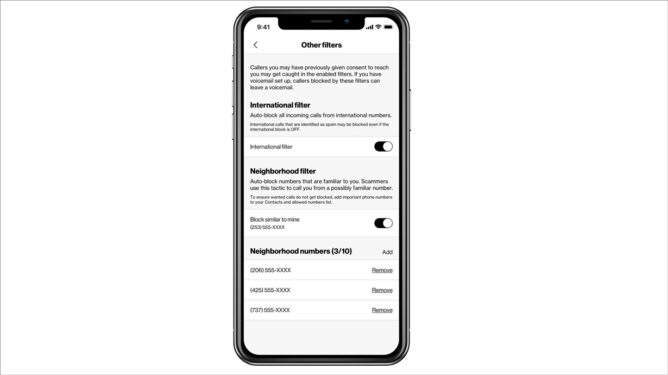 Hey Google, AT&T, T-Mobile, and any other telecom company that's enabling billions of spam calls a year via inaction: please copy this feature immediately. I'm getting 20-30 spam calls a week, versus perhaps two from real people that I know. Just filtering out the first three numbers would chop the number of annoying spam calls I receive in half, if not more.

The Verizon Call Filter is a free service for all Verizon subscribers, available on Android via the app in Google Play. The latest update for both Android and iOS was last month; it isn't clear if the new filter feature is live just yet. Pick up Samsung's Galaxy Buds Pro at their lowest price yet

OnePlus defends its app-throttling on the 9 Pro, Snapdragon 888 'overkill in certain scenarios'