For as much fun as it can be to go hands-on with an over-the-top, preposterously expensive, gimmick-driven flagship phone, I've long held a special affinity for those that manage to do more with less — the affordable handsets. And while I still carry a torch for old Nexus models or the early days of OnePlus, today's budget market looks very different. Players like Samsung (and until recently, LG) make sure they have their bases covered with both premium and affordable models alike, while others like HMD's Nokia line have been catering more or less specifically to this segment. Today I want to look at one of the better-equipped of these still-very-affordable offerings, the mid-range Nokia 5.4.

With a big 6.4-inch screen, 4,000 mAh battery, and quad-camera setup, is this phone an absolute steal for just $250? Are you better off paying a little more (or even a little less) for one of its competitors?

This is a big phone. I don't like big phones. Sure, that 6.4-inch screen gives you plenty of display real estate, but you don't need to be carrying all that around in your pocket — the screen doesn't even look good. Viewing angles are abysmal, and of course there's lots of shadowing around the selfie cam's hole-punch cut-out like we see with all LCDs. The Nokia 5.4 also comes with a pre-installed screen protector ... and mine arrived installed crooked, and that's all I've been able to see since. 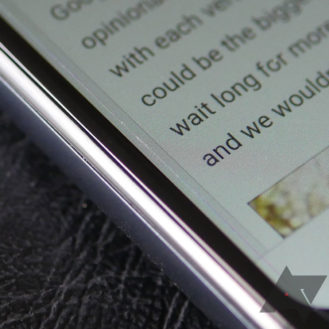 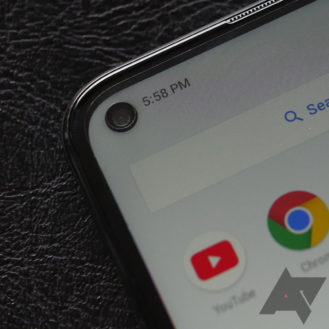 All I ask is that the screen protector actually be aligned with the screen (left); shadowing around the selfie cam (right)

For a display this large, it's also not particularly crisp. The 720 x 1560 resolution is quite low — just under 270 ppi, or about the same as we saw on the Moto G Play (then again, that phone costs $100 less). And while this didn't bother me nearly as much as my other issues with the screen, it's sure not making up for them, either.

The design's not a complete disaster, though. Sure, the plastic body feels cheap, but it's neither particularly thick nor heavy, even with that fair-sized 4,000mAh battery within. Nokia had the good sense to give the phone a rear-mounted fingerprint scanner, which is placed perfectly, and we even get the minor luxury of a dedicated Assistant button. 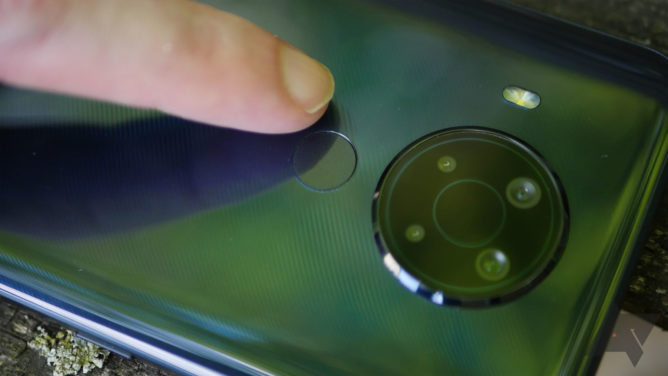 You won't find any complaints about biometrics here — at least Nokia nailed that much.

As a mid-ranger, of course there's a headphone jack, as well as support for microSD expansion. But with 128GB native storage, you're probably a good year or so away from really needing more space. Dual-SIM support is present for you power users and international travelers (and without sacrificing the microSD spot), and while you're not going to get 5G connectivity with this phone, the good news is that doesn't actually matter. 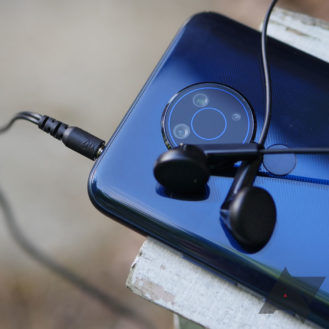 HMD ships the handset with a 10W USB charger, USB cable, and a very unsatisfying pair of headphones.

Nokia's software is a joy to use — credit where credit's due. Granted, most of that success is in the form of "not screwing up what Google's already done," but restraint is a virtue all the same. Pre-installed bloat is minimal, and so far software updates have been a little slow, but decent — at the time of publication, the phone's got its March 2021 patch. I don't love that we're still on Android 10, but Nokia promises two years of system updates (three years security).

With a Snapdragon 662 and 4GB of RAM, the Nokia 5.4 was never going to be a real powerhouse, but performance feels adequate for the sort of tasks its expected user base is going to be throwing at it. Scrolling gets jerky on busy web pages, and touch input can feel sluggish at times, but considering we're in $250 territory, I'm finding it hard to get too upset. 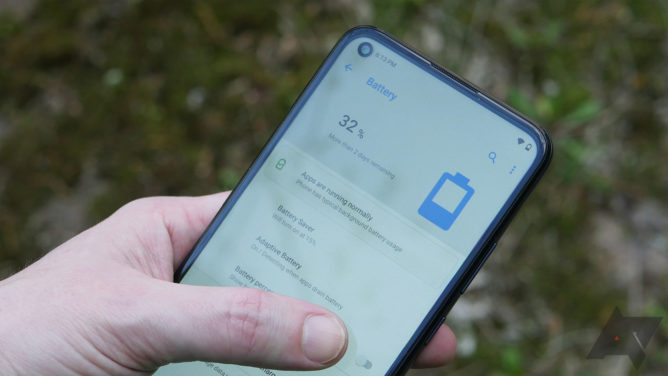 The single bottom-edge-mounted speaker is decently loud, but quality really suffers at higher volumes. Combined with my dissatisfaction with the screen, this doesn't come together as a great handset for media consumption.

On the plus side, battery life is excellent. You're easily going to get two days between charges with regular use, and I've come back to the phone even after much longer to find it still nursing a charge. Sadly, it doesn't recharge particularly fast with its included 10W adapter, nor support anything as luxurious as wireless charging.

HMD likes to lean into one particular niche for many of its phones — here, it's clear that the company thinks the cameras on the Nokia 5.4 are something special with the way it highlights them. The main array consists of a circular set of four cameras: our primary 48MP, a 5MP wide-angle, a 2MP macro cam, and finally a 2MP depth sensor. 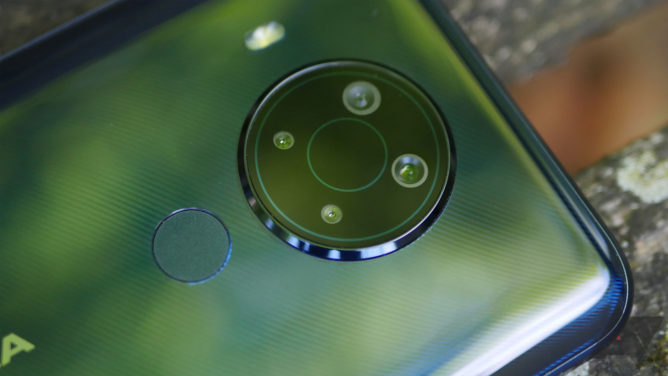 Of all the options you have, the most successful here by far is the 48MP main camera operating in 12MP mode. Focus isn't always as sharp as I'd like, but colors look good. Unfortunately the other cams can't even manage that, and the wide-angle in particular suffers from poor color accuracy: washed-out and far too cool. The macro camera is also disappointing, constantly drifting out-and-further-out-of-focus (I never quite did get it "in"), while almost shouting at you "JUST KEEP IT EXACTLY 4CM AWAY, IS THAT SO HARD?!?"

This is all a shame, because the main camera's fine — and videos look as good as stills. I just wish this phone stuck to what it did well, instead of half-assing all these other sensors.

Nokia 5.4
6/10
I wouldn't. This phone is utterly not for someone who prefers compact, pocket-friendly devices, prioritizes media playback, and wants a really flexible camera package. Like a distressing number of other affordably-priced phones, it feels like the Nokia 5.4 was built around the idea of a physically large screen, all other considerations be damned.

If your interests in a phone are also sufficiently myopic, the Nokia 5.4 might be a good fit. The battery life is nice, SIM and expansion options are good to see, and the software won't make you angry. For $250, maybe that's not a bad package.

Personally, though, I'd be saving up $100 more and getting a Pixel 4a. 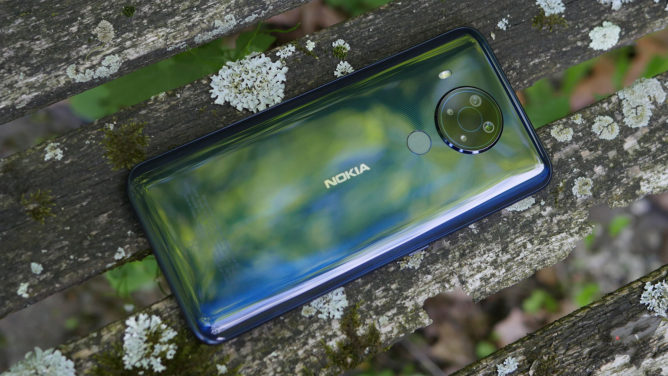 I'm not going to lie: when I finally wrapped up my initial Nokia 5.4 review, I was happy to power this handset down and get back to my daily driver. And for a few weeks, things were good — pleasant, even. But there was still this lingering feeling that I hadn't quite gotten to the core of the Nokia 5.4 experience, and that if I was really going to do this phone justice, it might mean taking another pass. And so, driven by an unsettling urge that lives somewhere between obligation and regret, I juiced the 5.4 back up and powered it on.

I touched ever so briefly on the issue of viewing angles before, but I didn't really take the time to explain what's so immediately off-putting about the quality of this panel. The drop-off in brightness as you view the Nokia 5.4's screen from anything but dead-ahead is SO severe that even the distance between your eyes ends up being more than enough such that each sees the screen at markedly different brightness.

Your brain doesn't quite know what to make of that. Is this a depth cue? Are you just stroking out? All I know is that it's a recipe for headaches. 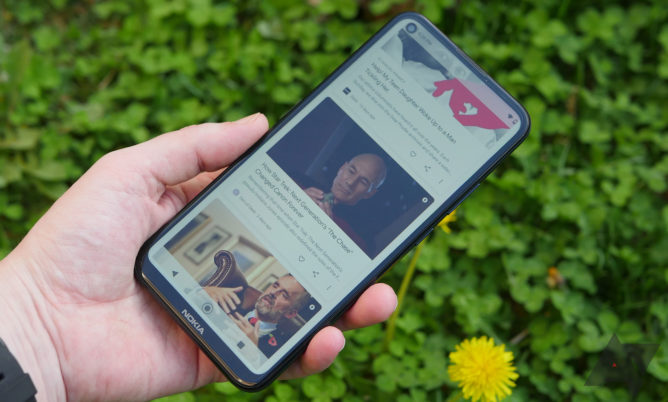 OK, but the display was never going to get better on its own (my mind was just in a hurry to suppress that memory as fast as it could). What about places where the Nokia 5.4 at least had the potential for growth? Software updates? Well, at least the phone finally just got its June update, but for several months there we were stuck on March security patches.

More than that, we're still on Android 10. Nokia's been struggling to keep up with its plans to update its phones to Android 11, already pushing back many ETAs. But last we heard, not even two months ago, the Nokia 5.4 was scheduled to receive Android 11 sometime in Q2 ... which we just blew right past, and there's still no release in sight.

Absent any improvements on the software side, there's still one thing that has the potential to soften my feelings towards the Nokia 5.4: an attractive price cut. At $250, the phone wasn't even expensive to begin with, but just faced too much competition from better-equipped (and only slightly more expensive) peers.

But now we're actually starting to see discounts bring the handset down to the $200 level (and even below) — and down here the phone's beginning to feel a little tempting. Nokia itself has the 5.4 for a cool $200, and better deals are popping up all the time — just a few weeks ago, B&H dropped its price down to $180. While I still have my issues here, that kind of pricing is finally starting to make the Nokia 5.4 worth considering.

Managing downloads in Chrome OS is about to get much easier