It's been less than a day since a coalition of dozens of US states sued Google in a federal court for antitrust behavior, citing its collection of fees for distribution on the Play Store. Google has fired back with a lengthy blog post in the standard corporate "nu-uh" counter.

Google's page highlights a lot of the features of Android that a typical tech news junkie will know: because device makers can use Android as an open source operating system and load up whatever software they want, and because users can sideload both apps and app stores on phones even if they come with Google services, Android is in fact super-duper open and creates tons of choices for both app developers and end users. Nobody has to use the Play Store if they don't want to. And other app stores, including the iOS App Store, the Amazon Appstore, and the Samsung Galaxy Store, charge similar fees, so Google's position is both competitive and allowing for competition.

Consumers can also “sideload” apps, meaning they can download them from a developer’s website directly without going through Google Play at all. People sideload successful apps like Fortnite, as well as entire app stores like the Amazon Appstore, neither of which are distributed through Google Play.

But this is moving the goalposts a bit, and assumes that the reader hasn't read the complaint the attorneys general filed (PDF link). The initial suit recognizes that sideloaded apps and third party app stores are available, but argues that Google's barrier to entry on Android still creates an effective monopoly, which it is abusing in order to maintain its favorable position as the de facto standard for Android app distribution. It also says that Google's various security warnings and even the language of "sideloading" implicitly train users to stay inside of its profitable garden. Quote the complaint:

In reality, Google imposes a series of technological challenges and pretextual warnings designed to prevent users from directly downloading—or “sideloading”— these apps or app stores. The term “sideloading” reveals Google’s view of the Android App Distribution Market: consumer use of the default Google Play Store is encouraged and expected, whereas use of a competing means of distribution is an aberration.

Moreover, the complaint limits its scope to the Android hardware and software market, explicitly shutting off a comparison to Apple's closed ecosystem where third-party access to apps is not allowed. Whether or not a comparison to Apple is warranted will certainly be a point of contention between the plaintiff and the defense, and one ultimately decided by the federal judge. 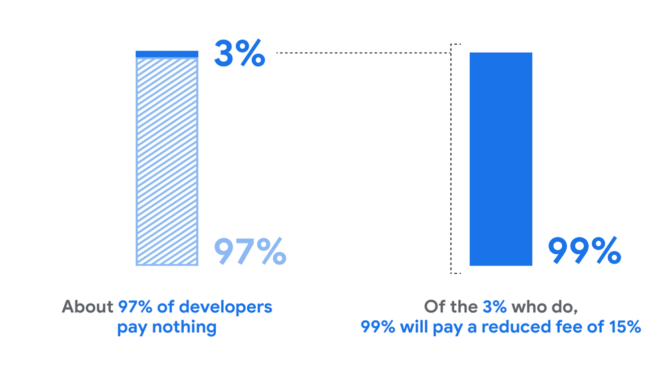 Google's playing fast and loose with some other statistics, too. It highlights that 97% of developers on the Play Store pay nothing to Google, and that of the 3% who do, 99% of them fit under the $1 million threshold for the new 15% revenue split, instead of 30%. But like the iOS App Store, the vast majority of actual revenue made selling apps is going to massive corporations with millions of downloads for their apps. That means that most of the actual money being made by apps is going to those larger corporations... and getting that lucrative 30% split for Google.

The blog post seems to be tacitly aware of this, thrice invoking the names of Epic and Fortnite (which arguably got the ball rolling last year). Google closes by claiming that the suit is on behalf of the largest app publishers and developers who simply want a bigger piece of the pie. Which may be a lot more true than the states represented would like to admit... but doesn't necessarily have any bearing on whether Google's behavior constitutes an abusive monopoly.

Google's response indicates that its legal team is going to attack more or less the entire lawsuit, from its basic idea that Google enforces an effective (if not total) monopoly on Android app distribution, to the suit's claim that its scope is Android alone and thus comparisons to Apple and other mobile systems aren't relevant. Between the breadth of states represented, and Google's world-class legal defense, it's going to be a long-ass lawsuit.