The true wireless earbud market is on fire at the moment, at just about every budget level. But according to the reviewers (including our own), Sony's the king of the ultra-premium hill. A smaller audiophile brand, Bowers & Wilkins, is aiming to usurp the throne with its very first set of TWEs, the PI7.

How did it do? Well, not great. While the earbuds are super-comfy, stylish, and the Bluetooth transmitter case is a brilliant add-on, the active noise cancellation is nowhere near top of the line (or even midrange). That makes these otherwise unremarkable buds a hard sell at their $400 price point.

The PI7 set has a pretty standard design, with a case that looks quite a lot like Sony's XF-1000XM3. The buds are fairly unique, though: stark white cylinders with gold tops and accents. There's also a darker gold-on-black model if that's more your style. It's a minimalist shape that I found fit my ears very well, despite being on the larger and heavier side for true wireless earbuds. 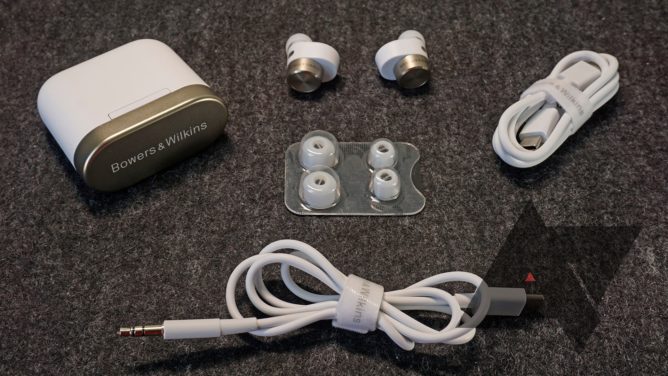 On each bud you'll find two microphones, sensors detecting ear placement, and the large flat circle on the outside for touch controls. The smooth, flattened surfaces are more resistant to picking up oil and wax than some others I've tried. The fit isn't quite as good as my go-to comfy buds, the Galaxy Buds+, but I found them much easier to wear for longer periods of time than Sony's latest designs. For a product that's literally touching you the entire time you're using it, that's a big plus. 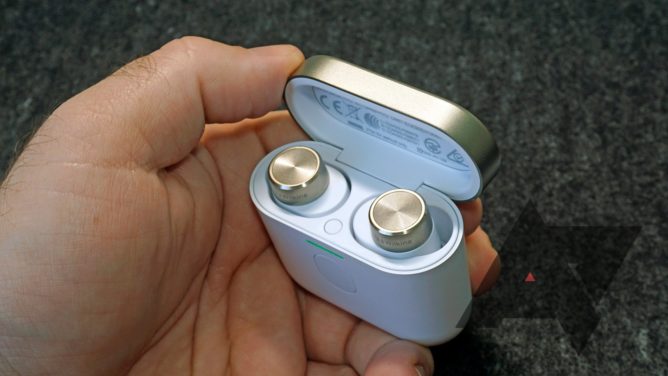 The case is pretty much what you'd expect: a little bigger than the tiny designs from Samsung and Apple, but not burdensome by any means. Magnets secure both the case lid and the buds themselves, and I never feared that the case would come open inadvertently. Note the two different paring buttons: one on the inside and one on the outside. The latter has to do with the case's audio jack Bluetooth functionality, which we'll get to later.

In the box, you get the buds and case, two alternate sizes of silicone tips (for a total of three), a USB-C-to-C charging cable (no brick), and the USB-C-to-headphone jack adapter cable.

It's a shame that some of the less tangible aspects of these headphones are lacking because the sound is great. While the profile is rather bass-heavy and lacking a bit of depth in the treble, I know that's not a problem for a lot of listeners with their favorite genres.

The drivers in the PI7 are 9.5mm wide, larger than most TWEs by a significant margin, which I suspect is what's delivering that full-bodied bass. It's not amazing for my listening habits (mostly spoken word), but the sound is undeniably good. And that boosted bass is one of the points at which the PI7 excels against the competition. 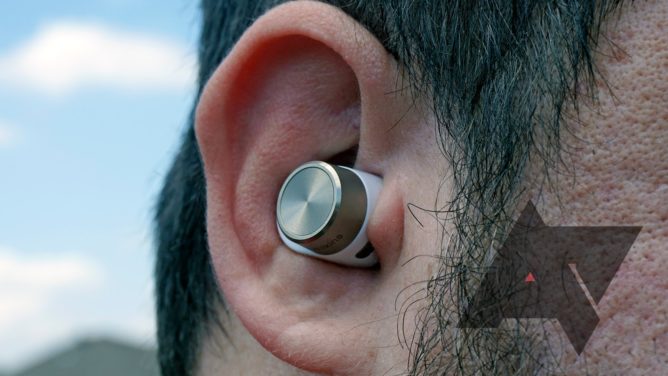 The other points? Not so much. The Bowers & Wilkins app doesn't include a built-in equalizer, so I couldn't judge the buds in a more wide-ranging capacity. And their active noise cancellation feature is, unfortunately, almost non-existent. I had to strain my ears to detect much of a difference at all between modes with the ANC on or off, ditto with pass-through audio enabled.

On a budget or mid-range set of buds, this would be unfortunate. On a set that costs $400, it's got to be a dealbreaker for most users. The market has just progressed too much for this to be competitive.

The PI7's signature feature, over both the competition and B&W's cheaper PI5 set, is the ability for its case to double as a Bluetooth transmitter. If you want to listen to audio from a gadget that doesn't have Bluetooth, like an old-school CD player, just plug the case into the source via the included USB-C-to3.5mm cable. Use the big button on the case to connect it to the buds, and you're ready to go.

This is an ingenious feature, especially for a brand that's all about classic hi-fi gear. Unfortunately, I found that fidelity is where it falls short. The case does a very poor job of translating analog audio into digital for Bluetooth playback; I'm no audiophile, but I'd guess that its built-in DAC isn't up to snuff. The audio heard in this mode is tinny and lacking the depth that it gets from a solid connection with my phone or computer. 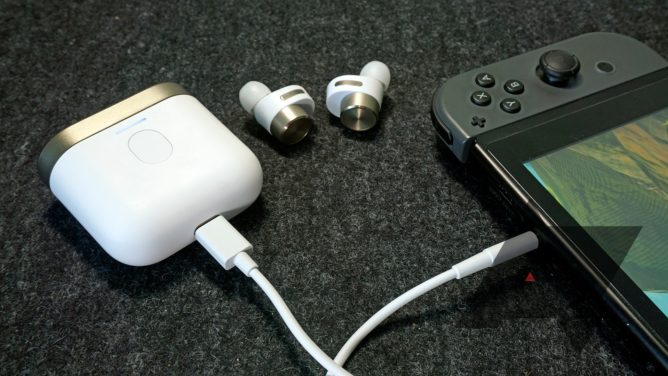 And speaking of connections: it's not great. The PI7 will start to stutter at about fifteen feet from the source, less than half the range I get from other true wireless earbuds. This is especially true when using the case as a Bluetooth adapter; in this mode I'd often find one bud or the other struggling to maintain its connection even when I was close by. I think anyone who's interested in this feature would be better served by a dedicated high-quality Bluetooth adapter.

The only other plus that the PI7 has over the competition is a collection of soothing soundscapes in the app. Six sets of "white noise," from ocean waves to rustling leaves to a crackling fire, can be played back with a sleep timer. Even if you often fall asleep with earbuds in (and I don't), you can replicate this with any number of free apps or websites. Not bad, but not a clear plus, either.

With ANC on, I found the PI7 gets about 4-5 hours of life in the buds, though that drops quickly if you're on a call. The case can handle three to four charges, meaning that the combo should get you through a weekend of travel, though you might find yourself topping it off if you're a heavy user. To aid in that, the case uses USB-C wired and Qi wireless charging.

While the PI7's big, flat touchpads are great for finding by feel with your fingers — something too many manufacturers neglect for a product you can't actually see while in use — I found their actual options lacking. The app (once again clearly inspired by Sony) offers no option to change up the controls themselves.

It's the usual mix of taps and holds for calls and music. But there's no option to change volume, which is something I would have preferred over the switch between ANC and pass-through, which I never used intentionally. A missed opportunity.

No, sorry. The B&W PI7 sound great, they're comfy, and it has an eye-catching feature in its Bluetooth transmitter. It's just too darned expensive to justify given its poor noise cancellation, connection woes, and lack of options.

Audiophiles might be intrigued by the Bowers & Wilkins brand, but these buds are very much a first-generation product. Those looking for exquisite audio quality should check out the alternatives from Apple or Sony. Even at their full MSRP, you'll be able to throw in a dedicated Bluetooth adapter for the same price. 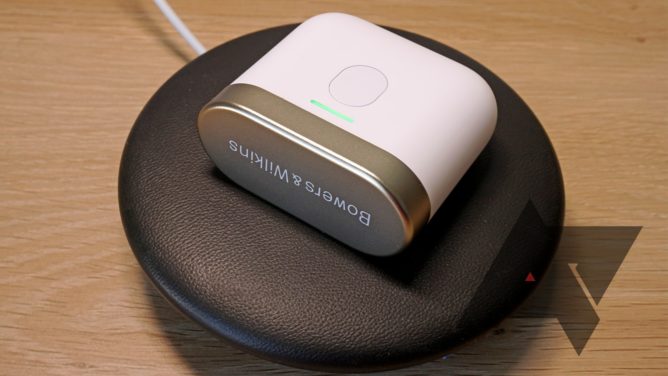 There's a lot of promise in this design, but in order to compete, B&W will need to drastically improve its noise cancellation chops and work on stabilizing that Bluetooth connection. Or failing that, just chop the price down dramatically. I look forward to seeing further efforts from the company along these lines.