The part of my brain that never progressed past the age of seven knows that two things are cool: fighter jets and Sonic the Hedgehog. The latter has been through some rough times since 1994, but supersonic airplanes remain perennially awesome. So when I saw "Galaxy F22," I had a fleeting notion that maybe Samsung had made a tiny fighter jet, or perhaps just a phone that was themed after a fighter jet. Like it had exhaust port decals around the speakers or something.

Nope, it's just a dumb phone. It doesn't have jet engines, it doesn't shoot missiles, it doesn't even fly, unless you throw it like a frisbee. And it's so disappointing that you might as well do just that.

SamMobile reports that the Galaxy F22 (UGH) will be more or less identical to the A22 non-5G variant based on a series of regulatory agency listings, just rebranded for the Indian market. That means it'll use a 6.4-inch 720p AMOLED screen at 90Hz, a MediaTek Helio G80 processor, 4Gb of RAM, and 64GB of storage, with a 6GB/128GB version being possible. It's using a quad rear camera with Samsung's rather common 48MP primary shooter, 8MP ultrawide, with 2MP depth and macro sensors, plus a generous 13MP front-facing cam. Other notable features include a MicroSD card slot, side-mounted fingerprint sensor, and a 5000mAh battery with 15-watt charging.

The Samsung Galaxy F22 cannot reach speeds of up to Mach 1.8, cannot engage multiple air and ground targets at once, and it does not have stealth geometry and radar-absorbing materials for minimizing detection by enemies. I guess you could put it in a black case or something. On the plus side, the Galaxy F22 will almost certainly cost less than 300 million American dollars per unit. Based on the UK price of £199 and similarly-specced phones in India, a launch price of around ₹15000 seems reasonable.

Today Samsung made the Galaxy F22 official for a launch in India. As expected, it's largely the same phone as the Galaxy A22, though this variant has a considerably bigger battery at 6000mah — with the LTE radio, that thing should run literally for days. It's also slightly thicker (9.3mm) and heavier. Both the 4GB/64GB and 6GB/128GB models will be available. 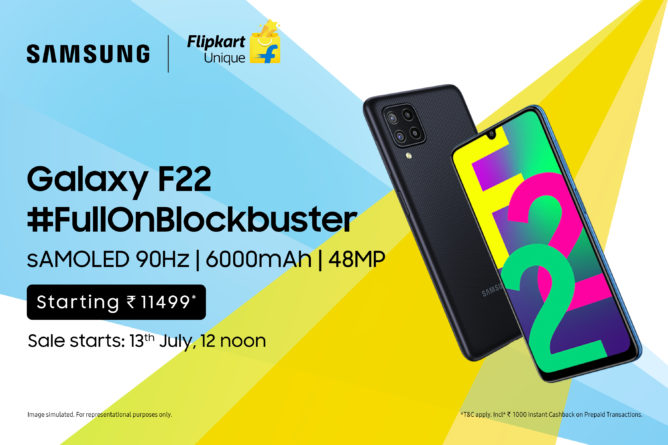 The Galaxy F22 will be sold directly from Samsung, on Flipkart, and in other Indian retailers starting July 13th, for ₹12500 and ₹14500 for the 4GB and 6GB versions, respectively. It'll come in blue or black colors, and Flipkart pre-orders can take ₹1000 off.

And dammit, it's still not a fighter jet.

Nothing announces something: Ear (1) earbuds will have ANC and cost $99, coming July 27th