The Surface Duo is the first phone Microsoft launched with Android, and despite loads of hype and a novel form factor, it was never much more than an interesting outlier in the phone market. But once you reduce the outrageously high asking price of $1,399, the equation might change for some who have always wanted to pick up one of these historic devices. And after a cascade of price drops, we've reached a new low: The AT&T carrier-locked Surface Duo starts at just $409.99 on Woot today.

The Microsoft Surface is a weird phone, and we stated as much in our review. On the outside, nothing really gives away that it's a smartphone or foldable, with no screens or cameras visible. When you open it, you get two identical 5.6-inch 4:3 AMOLED displays with a resolution of 1800x1350 — and that's the sole interesting and novel part of the phone, truth be told. The rest of the hardware isn't particularly exciting or even just good. I'd imagine you'd want to pick this phone up to own a part of smartphone history more than anything, though it might also turn out to be a great handheld Xbox gaming device if you're into that. However, Microsoft itself apparently isn't interested in this phone that much anymore. Despite promises, the Surface Duo still hasn't received an update to Android 11, so you have to make do with limited software support. 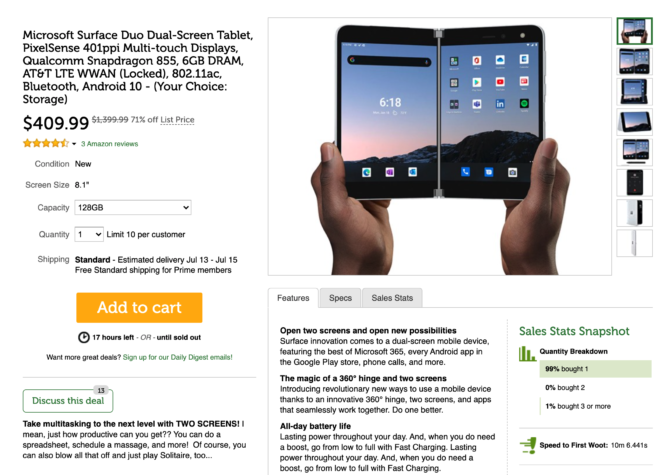 If you're an AT&T subscriber and you've always wanted to pick up Microsoft's vision for the future of smartphones, today might be the day you won't feel bad about spending hundreds of dollars just for that experiment. If you need more than 128GB of storage, you can also get the 256GB version for $509.99.