While smartphones regularly threaten to get more expensive every year, somehow the market for set-top boxes and HDMI dongles is dropping to seemingly impossible lows. When we were introduced to the Chromecast with Google TV last year, with 4K HDR support and the full capabilities of Android TV, it felt like a $50 gadget would be the best we could ask for. As it turns out, a new contender with similar specs and an even lower price has come from an unlikely source: Walmart... And it's pretty damn good.

The onn 4K streaming box is unremarkable, and that's probably the point. The device is just a small black plastic box with rounded corners. There's a microUSB port on one side for power, and an HDMI port on the opposite side for the TV signal. Another side has a small white LED and an inconspicuous button for launching the pairing process or initiating a factory reset. 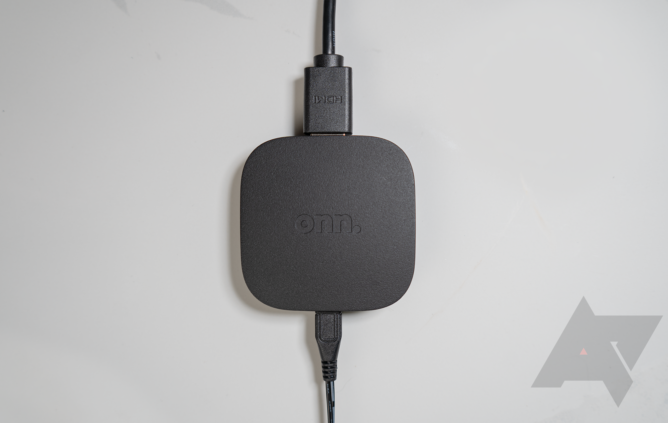 Quite a few people have complained that the onn 4K doesn't look good on top of their other AV equipment because it has cables running out opposing sides. I suspect this may be intentional, based on the lack of rubber feet and because the box is so lightweight that cables will easily pull it from most surfaces. I think the best solution is to stick it to the back of a TV using velcro strips.

The remote control sports most of the buttons you would expect to use with Android TV, plus four service buttons for direct access to YouTube, Netflix, Disney+, and HBO Max. Sadly, these buttons can't be remapped using popular tools like Button Mapper, but I think it might be possible to work around this for a couple buttons by sideloading custom apps with matching pnames. There are also a few buttons to directly control a TV's power, input, and change the channel up or down. The setup process offers to configure the remote's IR codes for your TV.

There's nothing overtly wrong with the remote, and most people won't have any complaints, but there are several issues a pedantic person like myself would like to fix. While I'm tempted to nitpick everything, two things stand out above the rest.

First, the textured white plastic is doomed to discolor and take on a dingy appearance from the oils on our hands. I assume white was chosen because it's easier to spot in the dark, but any number of bright colors would have been just as visible while maintaining the illusion that we're a clean species.

I was also disappointed by the rounded back that allows it to roll on flat surfaces, making it necessary to hold it in place on a table while pressing buttons. Additionally, it's not very wide and I had to grip the remote tighter than usual to prevent it from shifting in my hand when I pressed buttons. After about 30 minutes of continuous use, I noticed my hand was actually hurting a bit from straining to keep a grip. This will never bother anybody that only uses a remote to briefly start a show or movie, but it's going to be uncomfortable for activities like searching YouTube or watching lots of short clips and music videos.

It's simple details like these that make me want to reach for my TV remote. Fortunately, the HDMI-CEC implementation works pretty well. I did have some strange issues with the power button causing my TV to turn off and immediately back on, but I'm not sure if I should blame my TV, other connected devices, or the onn 4K. 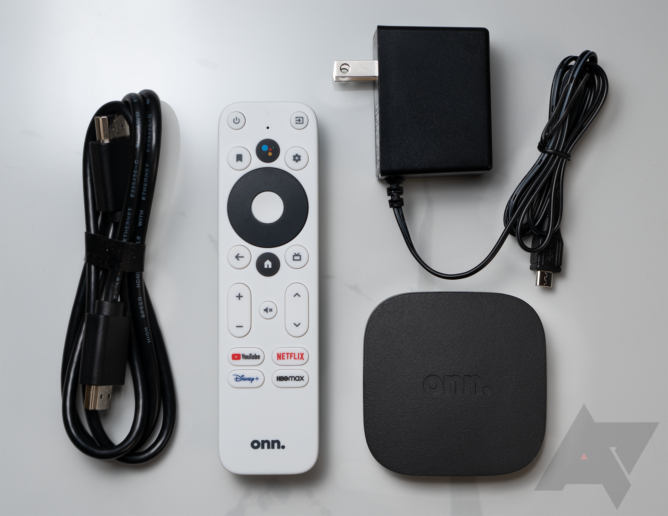 The packaging also includes power and HDMI cables, both measuring about 1 meter (just over 3 feet) in length. This seems a little short for the power cable, but it's probably long enough for most home entertainment centers. 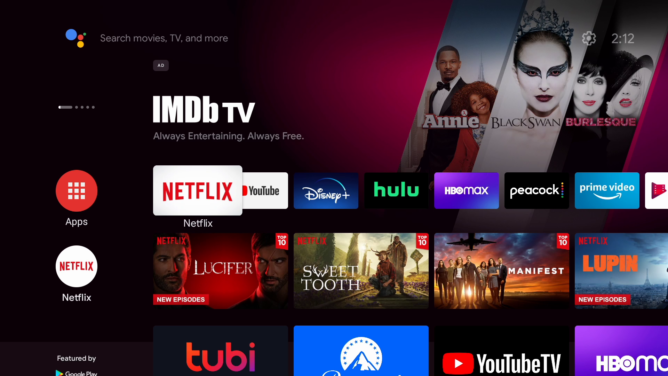 I was originally worried Walmart might stuff several garbage apps on here to squeeze a little extra profit out of a low-cost device, but it's actually running an essentially unmolested version of Android TV. I didn't see any shameless apps plugging Walmart's products or services, unlike what you would see from Fire TV (and Apple TV).

In fact, the only customization that caught my eye was a list of recommended apps during the setup process, and that was merely offering up a few of the well-known streaming services. From this list, you'll have no option but to install Hulu, HBO Max, and Prime Video; but they can be uninstalled as soon as you reach the main interface. Netflix and Disney+ are also pre-installed and non-removable, but I believe this is a requirement for streaming their 4K content. If you dig into the app launcher, you can also find an ugly, non-removable "MoviePlayer" app that's probably best left alone. 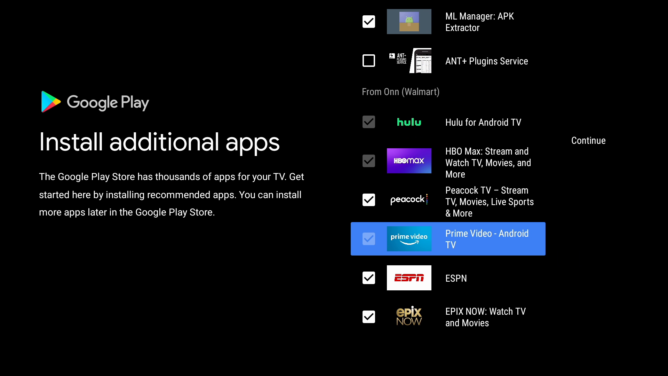 App and game launch speeds are basically on par with the Chromecast with Google TV. I didn't spot any frame drops or jittering, but I didn't install anything overly demanding. Since there's only 8GB of storage, about half of which is eaten up by the OS and a few pre-installed apps, you're not going to have much space for large games anyway. If you happen to have an OTG cable with power passthrough, you could connect more external storage and wired ethernet adapters. I also tried Stadia, and it was just like playing on a Chromecast Ultra, which is usually pretty solid for me.

Internally, the hardware is virtually identical to that of the ADT-3, Google's developer-friendly(-ish) reference device. It uses the same Amlogic S905Y2 SoC with quad-core 1.8 GHz CPU and ARM Mali-G313 MP2 GPU, and it's even manufactured by the same company, Askey.

The release of the onn 4K sparked a simple question: Is it worth an extra $20 to get the Chromecast with Google TV, or can we save a few bucks to get something just as good? In my opinion, the answer to that comes down to the future of firmware updates and exclusive features, but neither option comes with much certainty.

It remains to be seen if we’ll see OS updates for the onn 4K in the future, but that may come down to how successful it is and whether Walmart is willing to pay the ODM (original device manufacturer) for new releases. There is an update at the end of the setup procedure that brings the security patch up to April 2021, which may suggest Walmart and Askey aren't going to abandon it right away.

Of course, the draw of a Chromecast with Google TV isn't just about timely OS updates, it also has the potential for new and exclusive features. Google hasn't historically shown enough interest in Android TV over the years, but now that there's a relevant first-party device — we're going to pretend the Nexus Player didn't happen, just like Google does — it's a little easier to imagine something akin to the "Pixel experience" on our TVs.

Definitely. Despite a questionable future for software updates and a few relatively minor quibbles about the remote, this thing really is a great buy... given its price. It's not the absolute greatest hardware available — for that you should spend more for an NVIDIA Shield. It's also not the most stylish or promising the latest features — go order a CCwGTV if those matter. But this little streaming box checks all of the most important boxes: it's cheap, it works great, and has no big flaws.

Walmart's pricing is so aggressively low that it could be an impulse buy for many people. Even if you're inclined to spend a little extra to put a Chromecast with Google TV in your living room, it's easy to invest in putting an onn 4K into other places like a guest room or a workshop.