Deal hunters should take note today. Mint Mobile is running a very, very short-term promotional offer that expires tonight. For a slightly crazy $8.33 a month (or $100 a year), you can get a 4GB/mo plan through the MVNO with unlimited talk & text, but there is a catch. You'll need to sign a 25-year "contract" to get it, for an up-front total of $2,500.

It's half-joke and half-gimmick, but a very real deal you can actually plunk money down for. Mint Mobile is calling it The Bobby Bonilla Plan. I'm told that's a sports thing and today is Bobby Bonilla Day.

The terms for the plan are a bit nebulous, and it isn't clear what will happen if you choose to cancel the "contract." As far as I can tell, the same general terms apply regarding cancelations in that you can just sort of walk away whenever you want, but you won't get a refund for the unused portion of your $2,500 bill — though I'm not a lawyer. Mint Mobile can also elect to buy you out from the deal at a month's notice, but it's unarguably a good value at just over half off the regular $15 a month price. 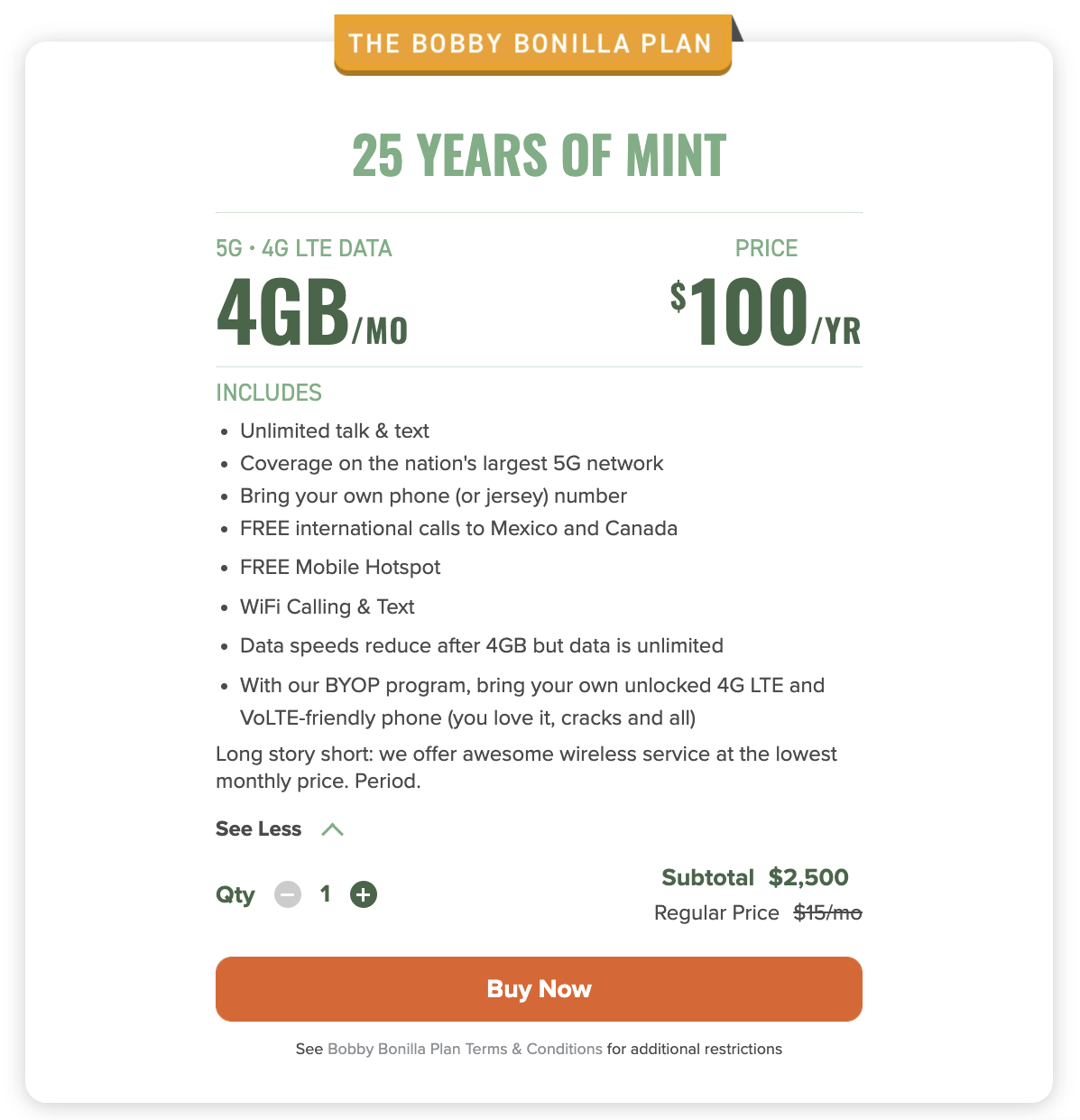 In addition to the expected and required unlimited calls and text, you get 4GB of data per month, plus free calls to Mexico and Canada and free hotspot use. Data is technically "unlimited," but your speeds are cut after hitting that 4GB cap. You do get 5G connectivity, though. If Mint's lowest-cost plan ever beats 4GB of data a month, The Bobby Bonilla Plan will get raised to whatever that plan gets, too.

Recent research (h/t Sascha Segan) indicates that T-Mobile-based MVNOs like Mint Mobile are also better off than AT&T-based ones, which seem to be throttled to a maximum of 75Mb down. So unless you go for a carrier plan directly or an unthrottled MVNO like Google Fi, you can't do much better in terms of speed. And, as with most carriers, you can port your number right over to Mint if you sign up. You'll need to either bring your own unlocked phone with support for Mint's frequencies (i.e., T-Mobile), or you can buy one from Mint.

The deal expires tonight at 11:59PM PT on July 1st, so you'll need to act very quickly to take advantage of the deal.

Our coverage originally indicated the plan would be paid yearly, but that's incorrect. It's $2,500 up-front.