Xiaomi sells a myriad of phones across its various sub-brands, and more often than not they’re very similar devices with only very slight differences in specs. This is the case with Redmi’s latest Note 10S, which is just a tweaked version of the standard Note 10 that we checked out a couple of months back. What that added ‘S’ in the name gets you is a MediaTek processor and a higher-res main camera. But there’s much more to the two devices than what Redmi wants us to see.

The two budget phones look identical on paper. It’s only when you use them side by side that you get a sense of how much they differ. There’s a clear distinction to be made regarding performance and battery life, as well as in other areas, and the outcomes didn’t always favor the pricier Note 10S.

The same, but different 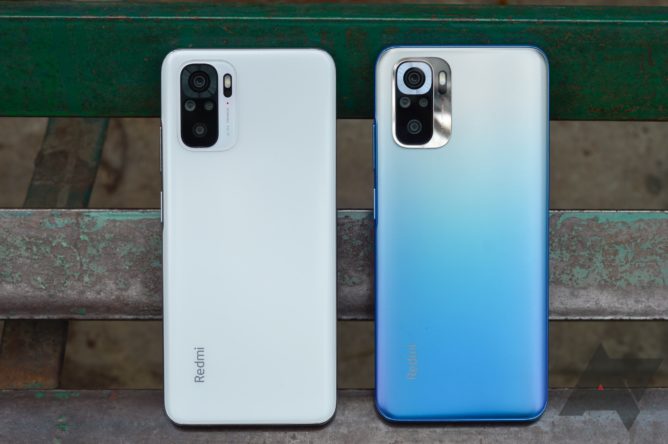 When it comes to the look and in-hand feel of the two phones, there’s absolutely no difference between the Note 10 and Note 10S; they share the same dimensions and feel equally lightweight. But their similarities end right there. Even though the specs sheet says that things like the display and battery capacity match on both devices, performance is divergent.

The screens share the same resolution and peak brightness, and they can produce an equal number of colors with 100% DCI-P3 coverage. However, in my day-to-day use, I noticed that both devices handle their display controls very differently, showing some visible variance in both screen brightness and color temperature.

At the same brightness level, the Note 10S tends to be noticeably brighter than the 10. Its auto-brightness levels are also more consistent, despite the fact that both devices have a 360° ambient light sensor. On the standard 10, the screen looked dimmer, and I often found myself scrubbing the brightness slider to get it right. 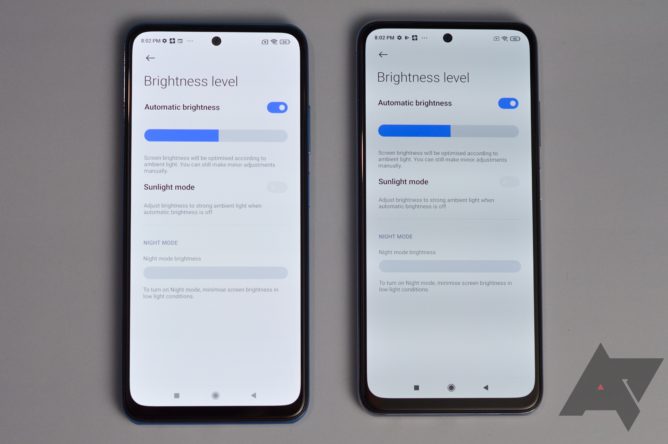 As for the color temperature, the Note 10 also looked slightly warmer than the 10S on the default display profile. You can always play with the calibration controls to tune it the way you like. However, that isn’t something everyone will be inclined to do; they will most likely stick with the stock settings and put up with whatever the display looks like.

I’ve tried to show both these display quirks in the image above, but the difference is much starker in person than what you see in the photo.

Just like the displays, both the Note 10 and 10S get the same battery capacity and charging speeds. But it turns out that the latter is slightly less efficient at using up all that juice. I tried to keep my usage on each phone similar to get a fair picture of their real-world endurance. By the end of my testing, the Note 10 was left with 33% battery, while the battery saver mode was just about to kick in on the 10S with only 16% of charge remaining.

There could be multiple factors at play here, but I’d put my finger on the MediaTek processor (more on its performance later) for the 10S’s marginally poorer battery life. Having said that, the Note 10S still isn't that disappointing as it can easily last you for more than a day, even with heavy usage. Both phones offer excellent stand-by times that can extend to multiple days if you aren’t on your phone all the time.

While the above differences are minor ones, the Redmi Note 10 and Note 10S differ more severely on three major points: software, performance, and camera. We’ll dive deeper into each of those aspects and try to understand if it even makes sense to spend a few thousand more on the 10S. 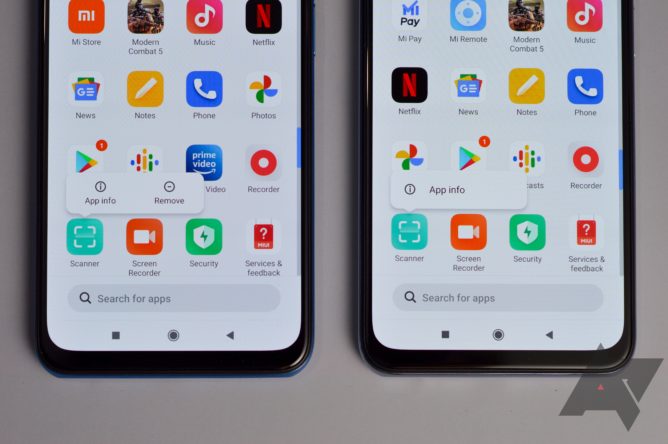 The Redmi Note 10S is the first phone, at least in India, to ship with MIUI 12.5. Among other features, this build is supposed to get rid of all the extra apps that Xiaomi preloads on its phones (read: bloatware). You’re able to take back control over which apps get to live on your device and which ones need to be kicked out. This was a much-needed move, and Xiaomi deserves a pat on the back for making it.

Besides that significant improvement, you also get a few new features here and there, like the new anti-flicker mode. In general, you’re unlikely to find too many differences between the OS versions unless they're pointed out to you. MIUI brings along a bunch of quirks on both phones, but as I said in my review of the Note 10, you will likely grow used to them in no time.

Considering the standard Note 10 will eventually get the MIUI 12.5 update (though we don’t know when exactly), software shouldn’t be your primary reason to pick one device over the other. 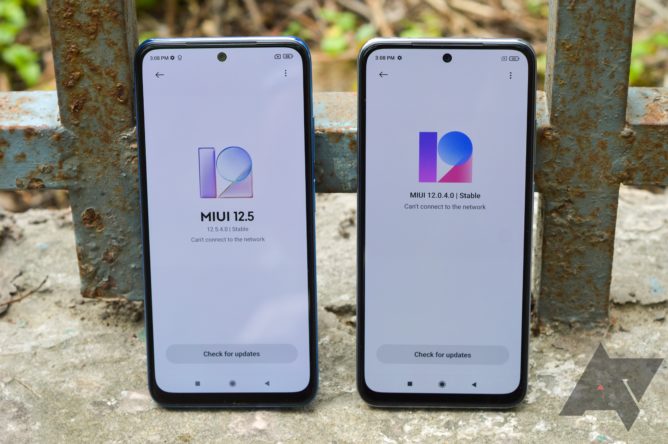 While software may not be the big factor in your purchasing decision, performance probably should be. For most day-to-day apps, both phones perform identically. But as you move up to more taxing and graphics-intensive apps, the differences between the Note 10S’s Helio G95 and Note 10’s Snapdragon 678 become increasingly apparent.

Gaming happens to be the focus for the Note 10S’s marketing and also for a lot of buyers in this price bracket. The Mali G76 GPU paired with the Helio G95 does live up to the gaming performance expected from a phone of this kind. The Note 10S was generally faster to load games and take you into the action quicker. 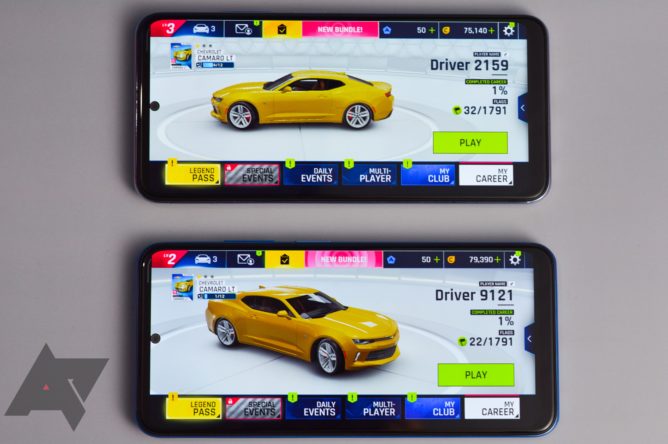 However, in-game performance was better with the Snapdragon processor. The Note 10 should give you a better overall experience when gaming with fewer stutters and frame drops. It also has the “better quality” graphics setting in Modern Combat 5, which the 10S lacks. Meanwhile, games like Asphalt 9 and Call of Duty have matching graphics options, but the gameplay is noticeably better on the Note 10.

The Note 10S tends to run slightly warmer than the Note 10, though I wouldn’t say it's anywhere near the heating issues that older MediaTek processors were prone to. You will be able to feel the heat increasing around the camera on both phones if you game on for hours, though it’s manageable on the Note 10. However, both phones may have a hard time coping with the harsh Indian summer if your gaming sessions are usually outdoors, more so for the Note 10S.

Technically, the Note 10S is supposed to have a better main camera array with a higher-res 64MP sensor (not the one found on the Note 10 Pro) versus 48MP on the standard Note 10. The megapixel count is usually more of a marketing gimmick for companies than an indicator of the actual image quality, however, and I think that's exactly the case here. When shooting on auto mode, the biggest difference that I noticed was how the two phones process colors. Photos from the Note 10S have truer-to-life colors, but they feel a bit muted when compared with the Note 10’s results. The colors in the latter’s images pop, making them feel more pleasing and Instagram-ready without needing any tweaks. You can pick which side you’re on, but for me, the Note 10 prevails here. The Snapdragon model also does a bit better with the dynamic range in challenging situations. However, there’s a good chance that you may find the Note 10S in that area performing better if you zoom in on other well-lit images. It’s frankly a hit or miss on both phones, and neither of them is fully reliable.

The rest of the sensors on the back and the selfie cam are the same on the two devices. You can head to our review of the Note 10 to learn more in-depth about its camera features and find several more camera samples. The Redmi Note 10S has turned out to be a mixed bag that failed to impress or even justify its higher starting price. It may be better than the standard Note 10 on certain fronts, but those are very slight improvements that, frankly, I wouldn’t have even noticed had I not used both phones side by side. That’s particularly true of the display quirks that I came across during my time with the Note 10S.

Redmi recently raised the Note 10’s price by ₹1000. While this deceiving post-launch practice is a whole different beast to tackle, the Snapdragon model still makes more sense even at its increased price. You’d be better off getting the higher-end 6/128GB variant of the Redmi Note 10 instead of the MediaTek-powered Note 10S. 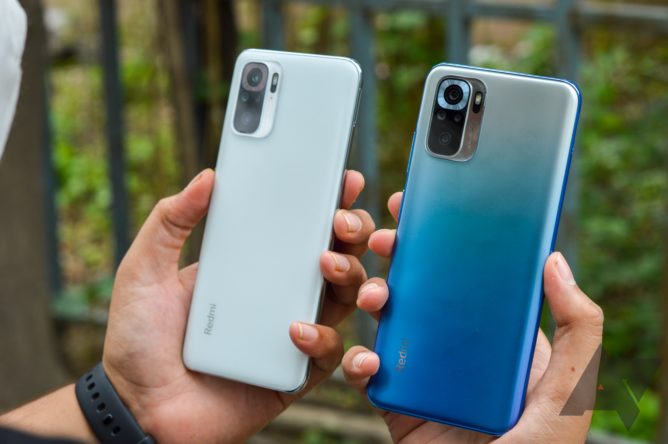 Since you're here, it's pretty safe to assume that you're looking for something that is able to offer better performance and cameras than the Note 10. If that's indeed the case, I'd point you towards the slightly pricier Redmi Note 10 Pro, which serves as a sweet middle ground between the Note 10 Pro Max and the Note 10 (I know, all of these names are confusing).

Check out Samsung's next clamshell foldable in all these glorious colors