Back in May, some detective work revealed that Google Messages would soon organize its texts into different categories, making it easier to find the conversation you're looking for. Included in this was the ability to auto-delete one-time passwords (OTPs) after twenty-four hours. Now the feature is official and will start arriving in a few weeks.

Messages will be sorted into several categories, including personal, OTPs, offers, and transactions. Hopefully, finding record of bank transfers or important conversations should be much easier now. 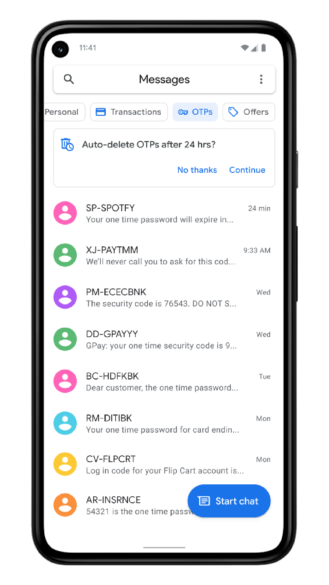 By far, the most anticipated addition here is having OTPs auto-delete after twenty-four hours. Many services support, if not require two-factor authentication these days, so setting up a new device and signing into all of your apps can include dozens of these passwords coming through in quick succession. For users very concerned with maintaining inbox-zero, not having to manually go through and delete them all will be a lifesaver.

Sadly, it would appear that all of this is limited to India for the time being. We've reached out to Google asking about possible plans for eventual expansion, and will update this post with any response.

Play video: Baba Is You is one of the best ways to spend $7 on Android