As most phones have left the headphone jack behind for good, true wireless earbuds have gone from optional accessories to must-haves for on-the-go listening. While Samsung, Apple, and Jabra fight it out in the premium space, there's still plenty of competition available for low and mid-range options. Amazon is no stranger to providing quality alternatives at lower prices — it's kept the budget Android tablet alive single-handedly with its Fire tablets. Whether it can do the same with earbuds is another question altogether.

Amazon released its first-gen Echo Buds back at the tail-end of 2019, promising a premium earbud experience without paying an arm and a leg. The company is back with a second shot at-bat, complete with a lower price, a more compact design, and some new features. The market for TWEs has come a long way in the last year-and-a-half, though, and Amazon's buds could use one more pass before they're ready for primetime.

When Amazon first announced its second-gen Echo Buds last month, many people — including myself — found the enormous Amazon "smile" on each earbud tacky. Thankfully, the logo is relatively understated in person; it looks more like an odd gray smudge than any recognizable design. The outer shell of the bud is large, but the matte black plastic looks and feels pleasant. It's a material I wish Amazon had stuck with throughout the rest of the Buds — the glossy black plastic lining the interior looks pretty cheap and is bound to gather scratches, dust, and ear wax over time. Thankfully, the exterior of the case sticks with the same matte black plastic as the earbud casing. 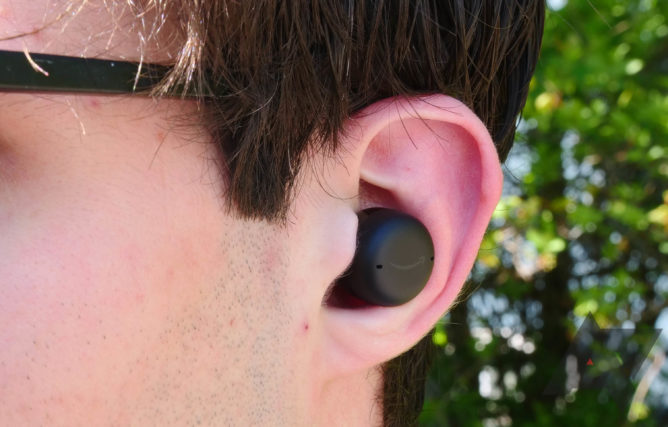 The biggest issue with the Echo Buds' design is the actual shape of each unit. Amazon has opted for a cylindrical frame instead of sloped or angled. It's just not a natural shape. Most modern TWEs — be they from Samsung, Jabra, or Apple — feature some sort of molded design to work with the contours of the human ear. With the Echo Buds, you either have to push an entire plastic body into your ear to hold it in place or let them dangle and hope neither falls out near a drain. Earbud comfort will always depend on the shape of your ear, but it's hard to imagine whose ears these are actually made to fit. 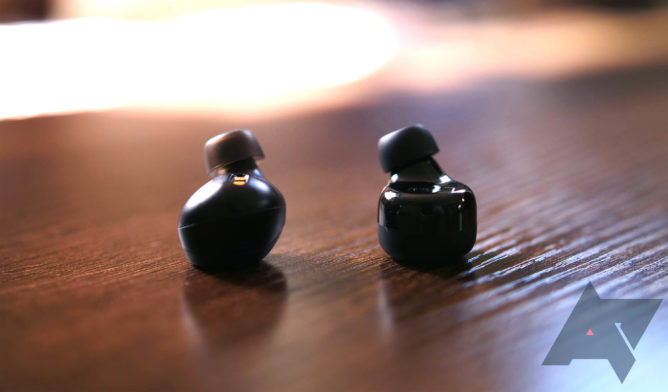 To help keep the buds secure while in motion, Amazon has included detachable wings in various sizes. They help keep the clunky buds in place, but they also add more pressure to your ear. Unfortunately, they're also pretty tricky to take off and put on, and they can make it trickier to get the earbuds lined up with the charging contacts in the case. Runners will be happy they're here, but an improved design would've negated the need for optional wings.

The hardware isn't a complete bust, though. Amazon has color-coded the earbuds according to size, so it's easy to tell which pair matches without comparing side-by-side. The redesigned case is excellent as well, with strong magnets for both the buds and the lid. Individual LEDs for both earbuds and the case also made it easy to tell the charge level for all three units. 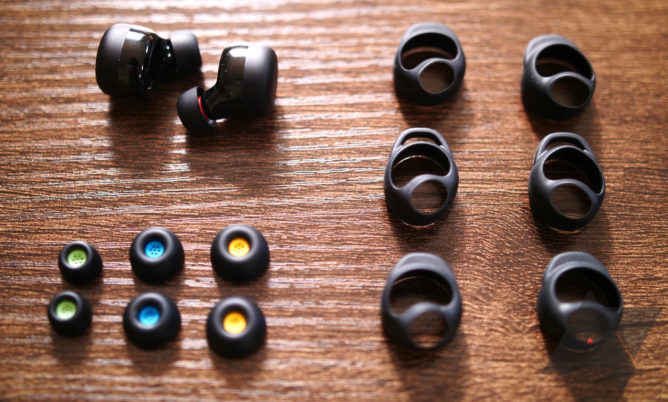 Amazon sells both a wired-only and a wireless charging version of the Echo Buds, along with an official charging dock from Anker. I really liked the charging pad — it's an extra purchase, but it displays individual LED indicators for both the buds and the case and can charge any Qi-compatible phone as well.

In the box, you'll find the earbuds inside their charging case, as well as the interchangeable ear tips, wings, a USB-C cable for charging, and the usual setup guide. 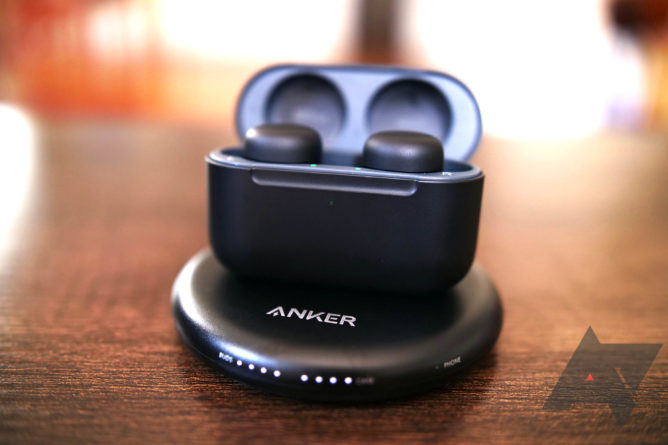 Any flaws with the design aside, Amazon's latest earbuds sound pretty good. They won't blow you away with incredible bass or audiophile-level reproduction, but as far as Bluetooth headphones go, you won't be disappointed. Head-to-head against Jabra's Elite 75ts (my daily drivers), the Echo Buds pack less of a punch in both low and mid-range, but the highs never sounded tinny. Cranking up the bass and mids in the Alexa app helped make up the difference, and I came away pleasantly surprised. Likewise, I was told that my microphone sounded fine from the other end of calls. These should get you through your next Zoom meeting without any issue.

Unfortunately, I wasn't as impressed by the rest of the listening experience. Active noise cancellation is enabled by default, but you won't be able to tell. Outside of a reduction in noise from air ventilation systems and running water, nothing in the world around me seemed to be muted. The same goes for passthrough mode, which uses the mics to give you a sense of your surroundings. Even at the default volume, it produces a loud hiss that undercuts any media playing in the background. Finally, the included touch controls were finicky, often pausing or skipping tracks while I readjusted its position no matter how carefully I placed my fingers. 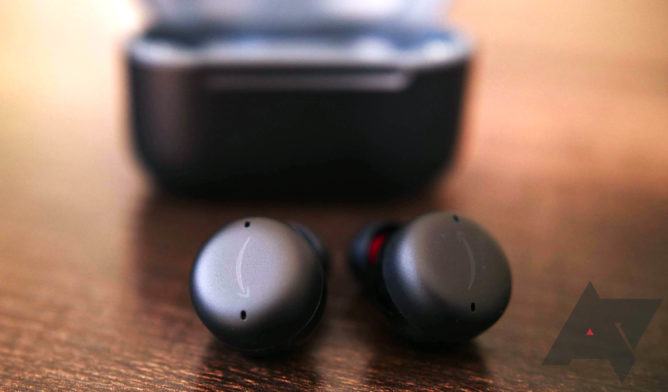 Hands-free Alexa works well, as long as you accept the usual limitations of Amazon's voice assistant. I had some issues getting Spotify to work with Alexa, but after reselecting it as my default music service, it eventually was back up and running. Though the response tone is slow to let you know it's listening, the buds quickly catch up without missing any commands. You'll need to make sure the apps you're using sync with Alexa — don't expect to use voice commands to pause playback in YouTube Music, for example.

Battery life is a little underwhelming as well. The buds last around five hours with ANC and hands-free Alexa enabled, which is about the accepted minimum in 2021. Unfortunately, the case only holds two additional charges, so you'll want to keep a cable handy. The buds don't turn off after an extended period of going unused, so make sure they go back in the case when you're done listening.

Maybe. Everyone's ears are different, but I think the shape of the Echo Buds is inherently flawed. Unfortunately, I just don't expect this design to be comfortable to most users, even with the interchangeable tips and wings. The plastic frame is just too hard and unforgiving without any sort of slope to provide a proper fit.

If they do manage to fit your ears, the second-gen Echo Buds provide a good listening experience, especially if you're invested in Amazon's ecosystem. While ANC isn't up to the quality of premium earbuds, it's about what I'd expect for noise-canceling-equipped earbuds below the $100 mark.

I’ve used the Echo Buds on and off again in the month since my initial review, and I still haven’t found a way for them to fit both snug and comfortably in my ears. A couple of placements I’ve tried do feel slightly more pleasant, especially without the included wing tips, but they aren’t nearly as secure. It still required me to fuss around with the earbuds every few minutes, especially when working out, and that often included accidental pauses or playback skips from the touch controls.

So even though I’ve mostly switched back to my Jabra Elite 75t’s as my daily driver, there are a couple of conveniences provided by the Echo Buds that I really miss. The ability to use each bud on their own is relatively rare in sub-$100 headphones, and it’s great that Amazon’s set can do it. The same goes for wireless charging — throwing the buds on a pad after the gym is super simple and prevents those unfortunate occasions where your headphones are dead before you even realize it. 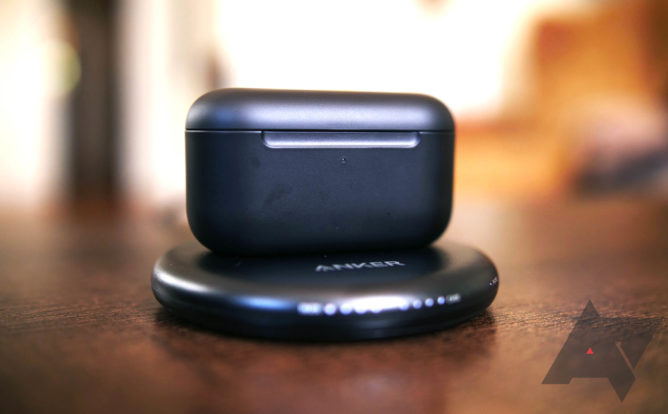 As long as they fit your ears, the price for the Echo Buds makes them pretty much unbeatable, besting even Google’s new Pixel Buds A-series unless you need Assistant instead of Alexa. Although Amazon promised the set would face a post-launch price bump to $120, they’ve actually dropped down for Prime members, going on sale as low as $80 ahead of Prime Day. If you can hold off for a deal, they might be a better budget pair of headphones than even Google can offer. That alone makes them worth a recommendation.

How to check if you have Gmail's new super-fast search, because it's scary quick