The last decade or so of worldwide culture has been defined by one thing: immediate and growing access to data. The biggest change is, of course, the shift from old-fashioned cell phones to smartphones, giving users in every geographical and economic niche access to the width and breadth of the internet everywhere they go. A recent analytical report has put that cultural shift into clear focus: half the people on the planet now own a smartphone.

That's according the Strategy Analytics, which claims that as of early 2021, 50% of the humans on Earth have a personal smartphone. The shift is a dramatic one. From 1995 to 2005, in the era of "web connected PDAs" and early smartphones running Windows Mobile and Palm OS, adoption slowly crawled from zero to less than five percent. You can see a clear shift in 2007 and 2008, at the beginning of the iPhone and Android era. Between 2010 and 2011 the graph starts to curve up sharply, as less expensive models become available to more people, and as more usable 3G networks start to expand around the globe. 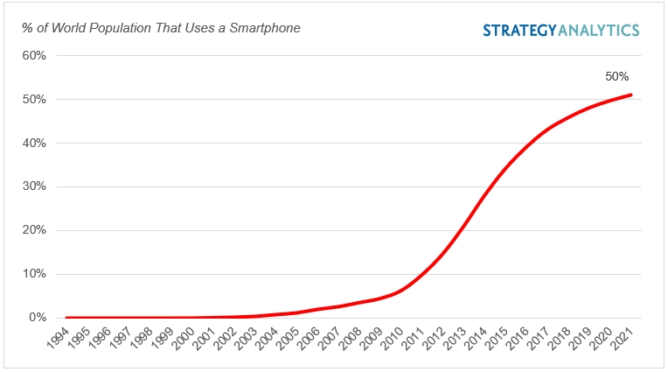 From 2016 onward, the market begins to mildly saturate, with the current rate of growth indicating that we won't see the kind of explosive adoption again anytime soon. Even so, it's an almost shocking statistic, given that the total world population includes children too young and financially dependent to own a phone of any kind, and a large portion of seniors who aren't interested in smartphones.

This metric is fascinating when considered as a rubric for human connection. Smartphones are relatively cheap (at least if you want them to be), portable, personal, and require only a tiny amount of electricity compared to laptops or desktop computers. That makes them useful to people even without reliable access to electricity or other services we sometimes take for granted. Statista claims that the percentage of the global population with internet access of any kind bumped to over 50% starting in 2019, undoubtedly linked to the spread of smartphones. 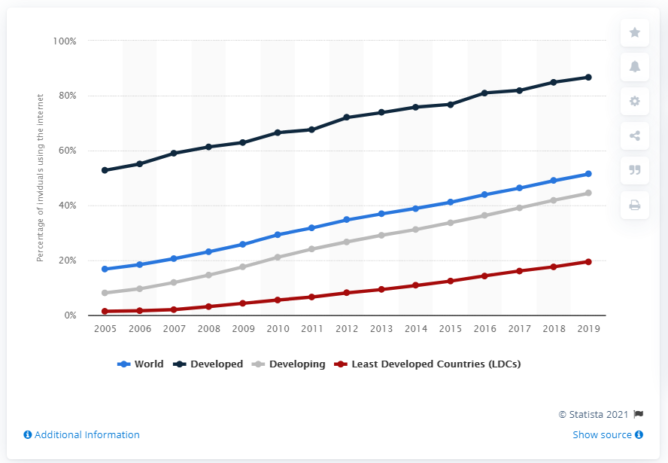 Tellingly, the rate of new users in developing countries is rising faster, as spreading networks and smartphones democratize access to data. While the developing world still trails wealthier countries by an order of magnitude when comparing populational access to the internet, that gap is shrinking quickly.

Netflix now lets you start watching stuff while it's partially downloaded in case the Wi-Fi ...