The biggest news of last week was Microsoft's announcement of Windows 11 — and, more relevant to us, the fact that the new OS will run Android apps. However, there is one major catch: The app store Microsoft plans to use is Amazon's. While sideloading apps will apparently be possible, we don't know what sort of restrictions or difficulties that might impose. So for this week's poll, we'd like to know: Do you think Microsoft is making the right choice using Amazon's Appstore on Windows 11?

I'm of two minds here because there is a clear consumer benefit in terms of competition. Yes, Amazon's Appstore doesn't have as good of a selection, and the company's recent practices are sketchy at best. In terms of tech giant conglomerates, Amazon's about as far down on the "evil" scale a company can go before it starts stealing candy from babies or starting fights in bars. But, Amazon's Appstore is also one of the very few third-party ones for Android that has managed to be successful at any level, and an uptick in customers via a Microsoft partnership could be the kick in the pants it needs to really compete with Google and provide us with a solid second choice.

Of course, a Microsoft Engineer says we should be able to sideload apps, but that's not necessarily an easy workaround for Microsoft's choice of store. Chromebooks are a good example for comparison here. Yes, technically you can sideload Android apps on them, but it's a huge pain in the ass, and there's no proof yet that Microsoft will make things easy for us, either.

Microsoft could likely have gone with the Play Store just as easily — after all, the company highlighted how closely it worked with Google for the Surface Duo dumpster fire — but Google's terms for such a deal would almost certainly have been more difficult for Microsoft to accept. Historically, Google's Play Store licensing imposes things like pre-installed apps, Google service integrations, and Google Search as the default search engine (though GMS licensing terms are usually confidential and vary by manufacturer and market). And when it comes to desktop services, search, and personal computing, Microsoft and Google are direct competitors. 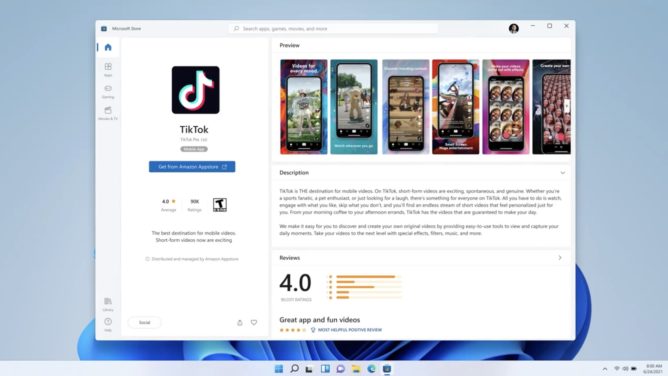 Lastly, Microsoft has a software storefront already: the Microsoft Store. In fact, that's how you'll get your Android apps on Windows 11, but Microsoft still isn't fully in charge. As the screenshot above shows, it's just a front-end for the Amazon Appstore. If the company wanted to, Microsoft could have just done its own thing from end-to-end.

There's a lot to balance here as you consider the question, but what do you think of Microsoft's choice of Android app store for Windows 11, and do you think Amazon's Appstore is the right one?