True wireless earbuds might be all about the sound first and foremost, but the devil, as always, is in the details and they include aesthetics. More of such details — specifically, the colors we can expect — have emerged from the usual sources.

91mobiles has obtained what appear to be official close-up renders of the buds in black, white, and violet as well as the cases they will come in. Notably, it appears that the original Galaxy Buds' two-tone combination of glossy and matte surfaces are out and a uniform surface is in on the Galaxy Buds2. Recent FCC filings included photos of the earbuds. 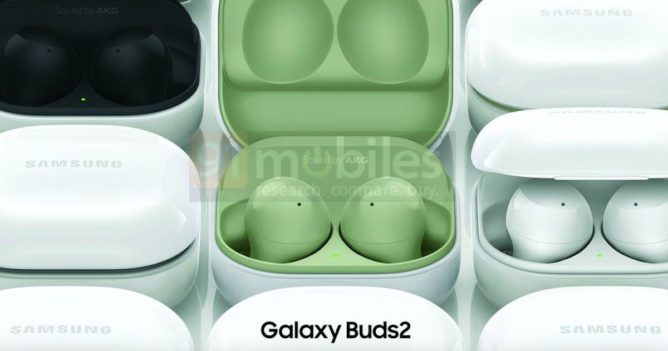 Another extracted asset seems to indicate a green color that might also be coming around. All said, though, availability will probably depend on the market, so if you're aiming for either purple or green, be prepared to "clean up, clean up, everybody everywhere." Yes, that's a Barney reference, it's here to justify our headline.

The Galaxy Buds2 are likely meant to succeed the original Galaxy Buds as an entry-level TWE option, so most observers don't expect active noise cancellation on them. Said market watchers are also betting that the Buds2 will be announced alongside the Galaxy Watch4 on June 28.