Over the last few days, we've seen reports that dbrand's new Damascus skin causes reduced cellular signal performance. The company has confirmed to us that certain wraparound Precision Fit versions of the new skin are affected due to a one-part-per-thousand metallic additive used to create the "holographic" reflective effect. Extensive testing to better understand the issue is ongoing, and the company promises to find an appropriate resolution for its customers.

Reports of the problem started trickling in over the last couple of days, and dbrand confirms that customers have reached out through its support lines for help regarding the problem. Though additional testing is happening as we speak, the problem seems to be caused by a metallic additive used in the new shimmering, patterned Damascus skin responsible for the so-called "holographic" reflective effect. Although the material comprises a mere one part per thousand of the total product and is very low conductivity, it is still apparently enough to affect a device's cellular signal strength in some cases, essentially creating a very weak Faraday cage around the phone. Testing regarding the issue is ongoing, but in its investigation so far (the full details of which are included in the PDF embedded at the bottom of our coverage here), dbrand discovered that the issue does not affect Damascus skins applied to laptops, game consoles, or AirTags. Furthermore, the Triple Black Damascus color is also unaffected, as it does not contain the metallic additive, and only the "Precision Fit" wraparound skins that cover the frame/antennas on some devices have any issue. The "Standard Fit," which only cover the back, shouldn't cause any problems with cellular signal, nor should Grip Cases with Damascus skins. The issue primarily affects cellular performance; wireless charging and NFC should not be affected according to testing so far. A minority of reports mention reduced Wi-Fi or Bluetooth performance, but the volume of such reports is lower, and the anecdotal nature of public testing done so far isn't enough to determine if other types of wireless signals are affected yet.

In its statement to us, dbrand accepts responsibility for not noticing the issue in testing. Though the company did perform field tests, they were limited to dense urban areas with quite strong signal strength, so the issue was not as noticeable. However, upon further review, dbrand does note that its data does indicate a problem it did not initially see. 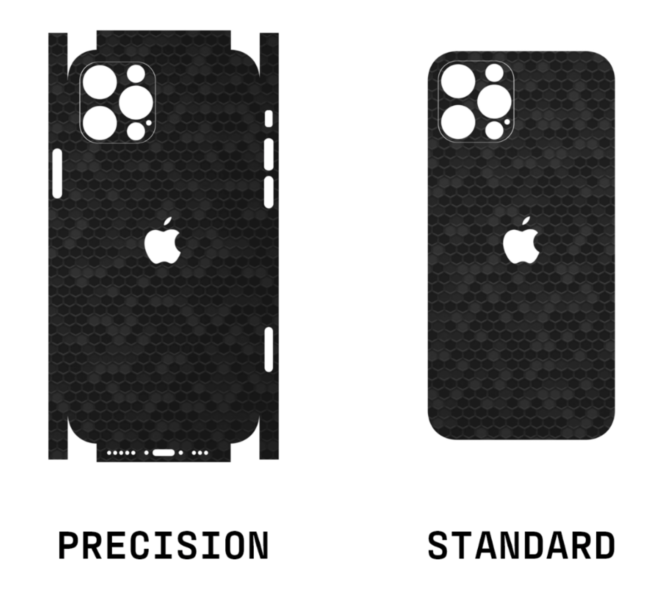 Damascus skins in the "Precision Fit" skin style on the left are primarily affected according to testing so far. "Standard" skins don't seem to cause issues.

To fix the problem, dbrand is doing two things: All skins that could cause the problem (i.e., 69 different "Precision Fit" skins in the Damascus line excluding the Triple Black colorway) are no longer available for purchase, and customers that are affected by the problem will be contacted via email with a resolution. The company doesn't know what that resolution is just yet, and it is performing additional testing and analysis over the next 72 hours — presumably to better understand the nature of the problem, which could determine the sort of solution provided to customers. But we should point out that dbrand has a good track record of doing the right thing for its customers, as in the case of the original Grip case manufacturing issues, where the company sent replacements to every customer that was affected.

For more detailed information, dbrand's full statement to us is embedded just below.

Scribd has either taken the document down or is having intermittent issues, so we have a backup host here if you have any trouble accessing the PDF.

With noise cancellation, wireless charging, and more, these EarFun Free 2 wireless earbuds have ...