It's a tale as old as time: phone arrives on store shelves to great reviews, phone reveals itself to have serious problems, customers file a class-action lawsuit. The Nexus 6P may have started on a strong note, but it didn't take long to develop issues with premature shutdowns and bootlooping. Huawei and Google paid out settlements to owners early last year, but it seems like another series of payments are making their way into bank accounts.

As spotted by one of our readers, new returns are being sent out to users who had filed claims regarding the Nexus 6P. The amount seems to vary; our tipster received $11.33, but Kellen at Droid Life was paid $6.14. It's odd timing, considering payments originally went out for this settlement well over a year ago, and because the website linked in the description notes that final distribution for claims would be sent no later than February 21st, 2020. 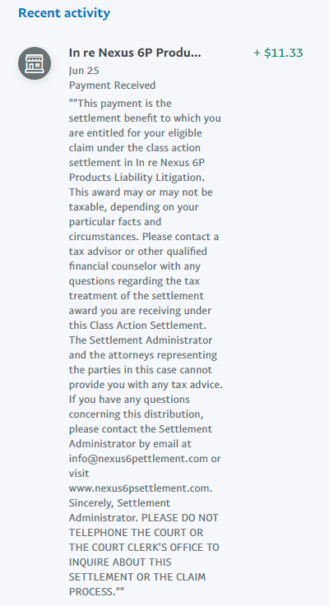 In all likelihood, this is a case of additional unclaimed funds leftover from the settlement, though it's still a strange event to take place unannounced more than a year later. If you were a Nexus 6P owner who received some cash last year, you might want to check your bank or PayPal account. You could have some extra cash waiting for you ahead of this weekend.