Qualcomm has been the chipmaker of choice for most mobile gamers with its flagship Snapdragon chipsets. However, MediaTek isn't standing on the sidelines this year, bringing heat to the market with its updated Dimensity chipsets. The Dimensity 1200 is one of its most powerful offerings, and the Realme X7 Max is the first phone outside China to feature it.

With benchmark scores that can rival the Snapdragon 870, does the Dimensity 1200, inside the X7 Max have what it takes to win hearts and minds? Spoiler: yes, it's got plenty of power to satiate your gaming needs.

I wasn't a fan of the motto printed on the back of the Realme X7 Pro, so I'm glad it was done away with for this puppy. That's not to say that the phone won't catch anyone's eye. The grippy polycarbonate back has a smooth strip running through it that houses a color-changing logo. While I'm not complaining about using polycarbonate on the back, I think the sides should've made use of metal — with polycarbonate all around, heat dissipation isn't as effective as it would've been otherwise. 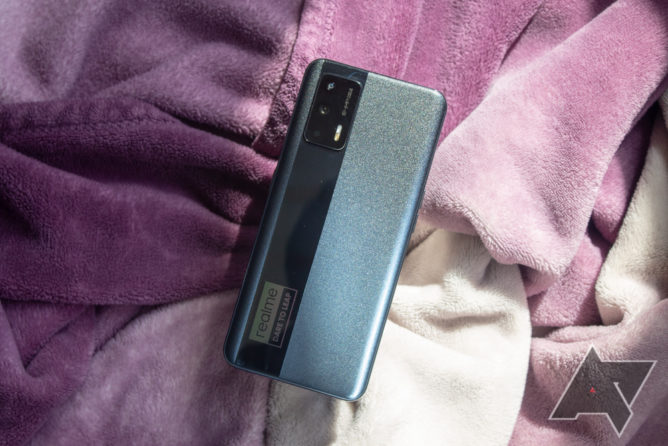 However, an advantage of using plastic is that the phone is pretty light and comfortable to hold. The yellow-accented power button is on the right side, and the volume rocker on the left. Both are easy to reach and tactile. Since the phone is aimed at gamers, Realme has even thrown in a headphone jack.

What's a gaming-oriented phone without a high-refresh-rate display? The Realme X7 Max packs a 6.43-inch FHD+ OLED display with a 120Hz refresh rate and 360Hz touch-sampling. The OLED panel has deep blacks and great contrast, making for an enjoyable viewing experience even in games with dark scenes. In terms of responsiveness, the display fares well, and a software overlay even allows adjusting of touch sensitivity and latency while in-game. 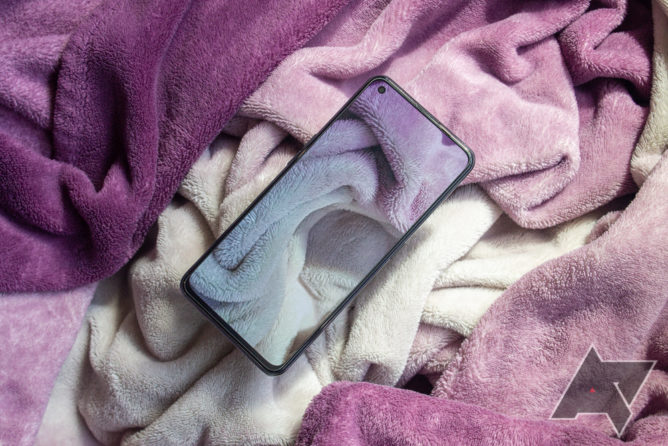 Unfortunately, the phone misses out on HDR certification, which means you won't have boosted colors in video apps like Netflix and YouTube. The media consumption experience is helped by the excellent pair of stereo speakers. They get pretty loud and don't lack depth even at the maximum level. The in-display fingerprint sensor on offer is quite accurate and unlocks the phone in a jiffy almost every time.

Realme offers a soon-to-turn-yellow transparent case, a 65W proprietary charger, and a SIM ejector tool with the Realme X7 Max.

Realme UI 2.0 is based on Android 11, and I have to admit, it's one of my favorite Android skins out there. It looks clean, navigation through the UI is smooth, and there's a boatload of useful features — including extensive theming, customizable AOD, and a comprehensive screenshot tool to name a few. However, the software comes with a fair share of bloatware, and spammy notifications from pre-installed apps are rampant — Xiaomi’s MIUI 12 is much better in this aspect.

The software doesn't have any show-stopping bugs, but the little ones can still be annoying. For instance, the phone often freezes when trying to quit Netflix, but the media still keeps playing in the background. The only solution, in this case, is a reboot. For someone who watches Netflix quite often, this is driving me up a wall. Realme’s implementation of smart home controls in the power button still isn’t functioning, either.

Another aspect where the phone falls short is software updates. The phone ships with Android 11, but will only ever get Android 12. This feels unfair especially since Android 12 is only a few months away from releasing to the public. If it's any consolation, it will get security updates for two years but it's safe to assume that the frequency won't be monthly. Given that competitors like OnePlus and Samsung offer much better software support in this price segment, Realme really needs to step up its game.

As for performance, the Dimensity 1200 doesn’t fail to impress. The phone flies through apps, and games run really well — not all of them are completely optimized for the phone though. Looking at pure benchmark scores, the phone touched 677,561 in Antutu; Geekbench Single-Core score is just under 1,000 at 967, and Multi-Core score is a cool 3,288. These numbers are close to what phones with Snapdragon 870 post and about 10% lower than Snapdragon 888 devices. 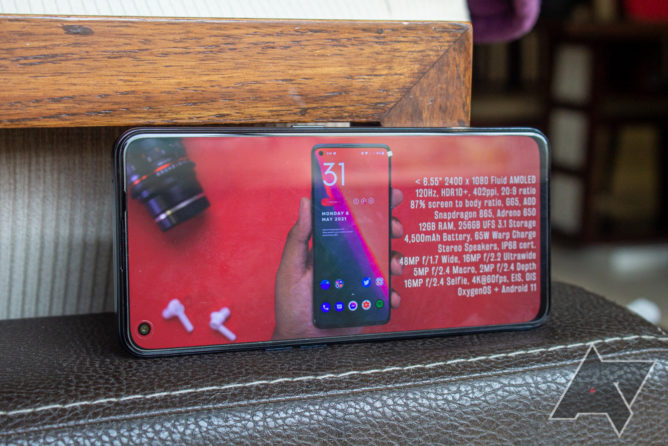 The Realme X7 Max also has great RAM management. Apps opened the day before will stay in memory waiting to be opened again, making it possible to start right from where you left. While I am toying with the 12GB model, plenty of devices with ample RAM still aggressively push apps out of RAM. I’m relieved the Realme X7 Max isn’t one of them.

The sustained performance is not comparable to Snapdragon flagships, but the phone's polycarbonate frame could have a role to play bottling up the heat. The phone got considerably hot while setting up and while restoring WhatsApp media, leading to noticeable throttling. However, for most tasks, this shouldn't be a problem.

There's a 4,500mAh battery on board that should power the phone for an entire day unless you lose track of time while playing games or snapping photos. However, in that case, the 50W SuperDart charge should come in handy. It's bloody quick, taking about 25 minutes to reach 60% and around 55 for a full charge.

The Realme X7 Max has a triple-camera setup — a 64MP Sony IMX682 sensor, an 8MP ultrawide, and a 2MP macro sensor — the last aims to satisfy a niche of people that is big on taking close-up shots which look like they were taken with a potato. 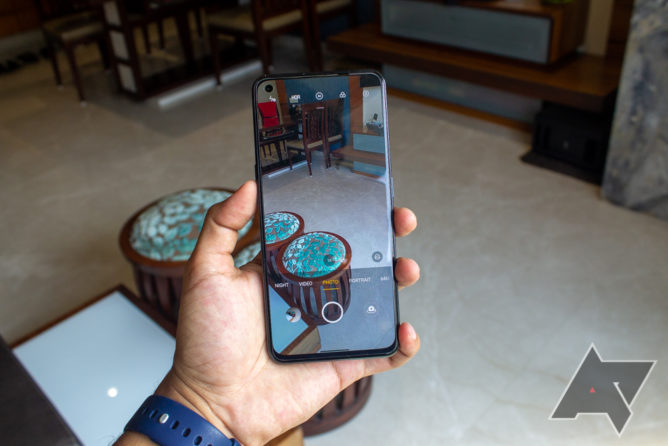 The primary sensor does not disappoint, however, with great dynamic range and plenty of detail. However, colors are on the saturated side, and this might not appeal to everyone — green in particular looks almost nuclear. The X7 Max can take delightful portraits too, as long as the subject is a human — some objects really throw off the bokeh algorithm (check the image of the Anywhere 3 box). Shots taken in low-light are not bad at all, with noise reduced, flares around light sources tamed, and decent details. The ultrawide sensor is one of the better I've seen in this price range, although it doesn't match the primary sensor in terms of dynamic range or color science. There's a dedicated night mode that delivers serviceable shots, but zoom in a bit and a muddy patch of pixels will greet you.

If you're not looking to capture artificial-looking selfies, I'd highly suggest you disable the beauty filter, which is very heavy-handed and enabled by default. Once you disable them, the phone delivers thoroughly 'grammable selfies. Portrait shots work great for the most part, but once in a while the phone botches it up — check the image where the side of my head falls a victim to a not-so-smart algorithm.

The phone can take [email protected] videos with the primary sensor, but you'll get software-backed stabilization only for 1080p videos. Like many other phones in this segment, videos from the front camera are capped at [email protected] This (and the fact that the sensor crops in quite a bit while shooting videos with the front camera) makes the Realme X7 Max not an ideal phone to vlog with.

Yes, but wait if you can. The Realme X7 Max and its MediaTek Dimensity 1200 can trade blows with some of the Snapdragon-powered flagship phones out there but at a fraction of the cost. Apart from great performance, it comes with the added benefit of a refined camera experience, a sharp 120HZ OLED display, bombastic speakers, a headphone jack, and the zippy Realme UI 2.0. While these factors tilt the scale in the phone's favor, there are a few annoyances.

Realme UI still has bloatware, and spam notifications from pre-installed apps seem to be on the rise. Additionally, the phone will only ever be officially updated to Android 12, which is not a good look for a phone of its price. Another thing that isn't in favor of the phone is the build — it doesn't feel as premium as the Xiaomi Mi 11X does. However, if you're the one to put phones in cases immediately, this might not matter as much to you. 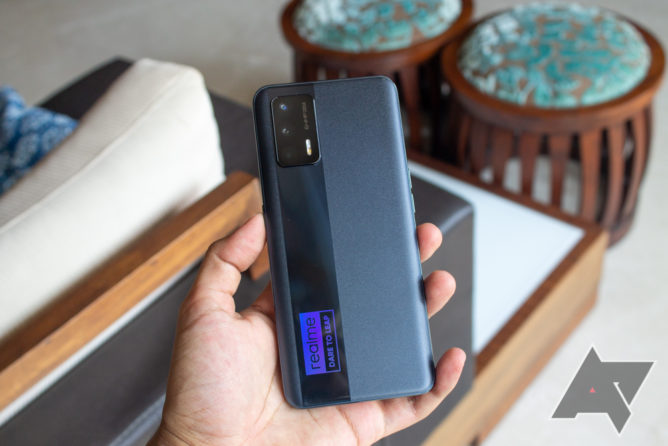 As for gamers, not all games are completely optimized for this phone yet. More importantly, Poco has confirmed the incoming of the Poco F3 GT. If you don't know much about that upcoming phone, it's expected to be a rebranded version of the Redmi K40 Gaming Edition. The phone uses the same processor and has the added advantage of shoulder buttons and a gaming aesthetic (although maybe that’s a disadvantage). While we can't say whether the phone will be worth buying over the X7 Max, it might be worth the wait if you're not in a rush to buy a new phone.

All said and done, the starting price of ₹26,999 for the 8GB/128GB variant and ₹29,999 for the 12GB/256GB is pretty attractive. The Realme X7 Max isn't perfect, but it sure is a compelling offer in its price segment — with support for a wide range of 5G bands, it's future-proof, too.