A lot of you got upset with me when I waxed poetic on how much better iPads are than Android tablets. Well here's your chance to put your money where your mouth is ... albeit slightly less of your money than usual. As part of Prime Day, Amazon is offering $80 off of the latest generation of the iPad Air. It's a fantastic deal on the "sweet spot" of the iPad lineup.

What I mean by that is this: the iPad Air gen 4 has almost most of the plusses of the iPad Pro, including that sleek rounded-and-flattened design, a bit of extra power, compatibility with some of Apple's (admittedly overpriced) keyboards, a slightly bigger screen than the base model, and most thankfully, a USB-C port that works with tons of accessories including video-out cables. And it does all of that while being hundreds of dollars cheaper than the Pro, missing out only on the higher-refresh screen, two extra speakers, and a better camera — features which, I would argue, aren't going to be a big deal for most tablet users. 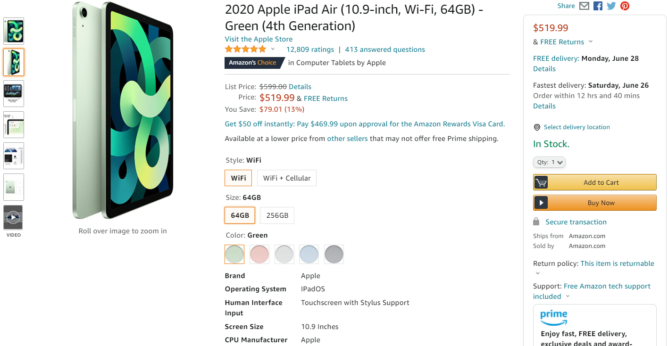 Huge Nest sale has something for everyone, including smart displays, speakers, cameras, ...