In the long-long ago, our distant forefathers lined the floor of their caves with reeds and dried grasses, painted its walls with ochre or charcoal, and used single, squat, bug-looking Wi-Fi access points for their home internet connections (and they didn't even support Wi-Fi 6). With the rise of civilization, we have given up on such primitive things — most of us anyway. If you're still using one of those ancient single-point systems, today is Prime Day, and that means big discounts on things like mesh Wi-Fi systems, including this pair of deals for Amazon's Wi-Fi 6-equipped eero three-pack, in both router-and-extender and router-only combinations.

If you've yet to make the switch to a mesh-based Wi-Fi system, you're really doing yourself a disservice. I know, I was sticking with an aging — but, I convinced myself, still perfectly good — Netgear R7000, suffering through issues like marginal signal in certain spots and congestion problems. (Admittedly, the last is sort of first-world-tech-blogger issue, with reliability dropping off around 40 devices connected.) 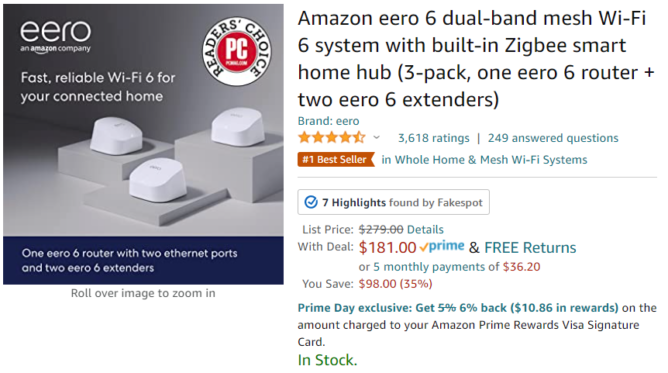 Most frustratingly, in hindsight, I didn't even realize I was making things harder for myself. But a switch to a mesh-based system at my house around a month ago has blown my mind. In basically every possible way, it's better, and I enjoy fast speeds and smooth video calls in spots where I couldn't even reliably connect before. Even my shorter-range 5GHz connections now work halfway down the block. It's seriously a game-changer. 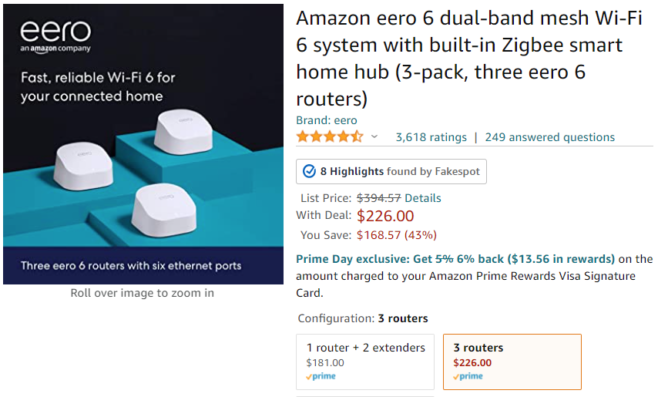 With deals like today's, you don't have to spend a lot of money to get a mesh system either. Right now, over on Amazon, you can pick up an eero 6 with one router and two extenders for $181, which is $98 off the list price and 35% off. If you want to use your mesh system to wirelessly extend ethernet around your house, you'll want to upgrade to the three-router set, as they have the extra ports. Luckily that's also on sale for just $226, or a chunky $168/43% off. Both support Wi-Fi 6 and work as Zigbee smart home hubs for further cave upgrades.

Objectively, this is a pretty good deal — just keep in mind that this model only offers speeds up to 500 Mbps wirelessly. That's enough for most, but if you have a gigabit connection or know you'll need more, consider something like the Nest Wifi, which is also on sale today.