When the Chromecast debuted back in 2013, it was a legitimate revolution: an incredibly cheap, incredibly simple gadget that let you send all the streaming video on your phone straight to your TV. But in the years since, Google has steadily lost ground in the set-top box market in pretty much every metric. The big winner at the moment is, indisputably, Amazon.

According to a yearly survey of the smart TV and streaming box market performed by Parks Associates, Amazon's Fire TV platform has jumped from just 12% of the market in 2015 to 36% in Q1 of this year, steadily growing and taking market share away from all competitors. The only streaming provider in the same league is Roku, with an equal 36% as of this year, though even Roku has been slowly losing ground in 2020 and 2021. 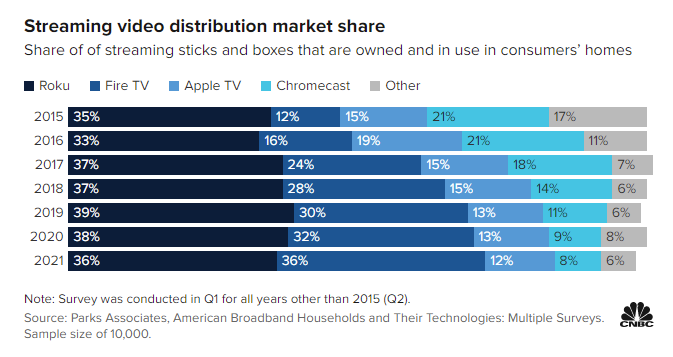 By comparison, Google's slice of the pie shrunk in each of the last five years, going from 21% of the market in 2016 down to just 8%. (Notably Android TV is not in the list, but even if it's included in "other," it's lost market share.) Apple has also shrunk, more slowly but with less to lose, and is currently beating Google with 12% of the market for Apple TV.

There are a lot of factors for Amazon and Roku dominating the market. First and foremost is availability: both companies have focused heavily on getting their respective software built into smart TVs from multiple manufacturers, in effect becoming the "default" smart TV operating systems in the same way that Android works on phones. This is especially true for smaller, cheaper sets that sell in volume. Google has tried the same move for years, with only middling success. On top of that, Roku and Fire TV standalone hardware is available dirt-cheap more or less everywhere. Amazon gets a huge boost from being able to promote its own hardware on its omnipresent online store, and Roku has been making progress by partnering with Onn, Walmart's house brand, for home theater equipment with Roku streaming built-in.

This Walmart-branded Roku soundbar is now on 4000+ store shelves across the US.

And both Amazon and Roku are throwing their streaming weight around. Last year there was a notable kerfuffle as Warner Bros. brand new premiere streaming service, HBO Max, was unavailable on either platform for months, until some concessions were made behind closed doors. Roku also has an ongoing tiff with Google about data for the YouTube TV service. The advertising and subscription revenue for a smart TV platform is considerable, even to a company as large as Amazon, to say nothing of the value of metric data on viewer habits.

Google is trying to make a comeback. In addition to a more comprehensive, Fire TV-style interface in the latest Chromecast, which is now more of a "Google TV" device than merely a remote streaming stick, the company is making partnerships to pre-load Google TV/Android TV on more televisions. A recent win was the launch of an inexpensive Google TV streaming box in Walmart, again using the Onn house brand. But any way you look at it, Google has a lot of ground to make up.