Samsung more or less dominates the high-end Android tablet space with its Tab S series, and while they're not as pricey as, say, an iPad Pro, they're not exactly cheap, either. If you've been hemming and hawing about picking one up, here's a deal you'll be interested to hear about: today, Samsung is offering $130 off both the Tab S7 and Tab S7+, plus a free pair of Galaxy Buds Pro with either.

With a Snapdragon 865+ and six or eight gigs of RAM, these tablets aren't exactly pushing any spec boundaries in 2021, but they're still plenty powerful for normal tablet use. They're also built extremely well. The smaller one does lack some higher-end features like the S7+'s OLED display, though. The Galaxy Buds Pro are great, too: we gave them our Most Wanted award. 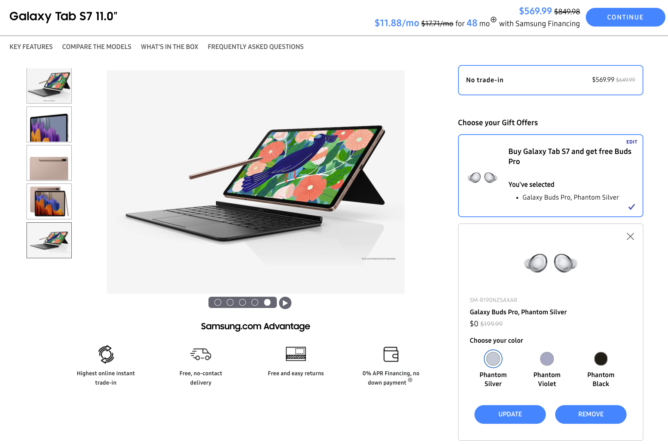 With this deal, bundles start at $570 for the smaller S7 and $770 for the larger S7+. Be aware that, despite Samsung's imagery, you're not getting a keyboard or kickstand at these prices (although the stylus is included). This offer is good until midnight tonight, Eastern time, so shake a leg.

Amazon delists RavPower, TaoTronics, and Vava as its crackdown on fake reviews continues