Android 12 is chock full of changes big and small, from a major visual overhaul with Material You to new privacy tools to help keep user data safe. As Google continues to push its phone lineup forward, some of those changes are exclusive to Pixel devices. The At A Glance widget will be a familiar sight to anyone with a Pixel phone, but it could be due for a rebrand — and an evolution — as part of Android 12.

Google's contextual widget could be renamed "Live Space" when the latest version of Android arrives later this year. The folks at 9to5Google managed to enable a menu for Live Space in the Google Assistant settings that replaces the At A Glance widget with something a little more robust. The new options list is much more fleshed out, though there's only one new option hidden among this list. That's the "At a store" toggle, which would prompt you with shopping lists and rewards cards stored in your Pay account. There's also a mysterious headphones toggle, though, without a title, we have no clue what it might actually do.

Thanks to the inclusion of "At a store," we might also have an idea of Live Space's new look. Found in Google's design video for Android 12 is a glimpse at a Material You-themed widget, complete with options for a shopping list and a loyalty card. There's no guarantee the final version will look like this, but it sure does blend well into the look and feel of Android 12. 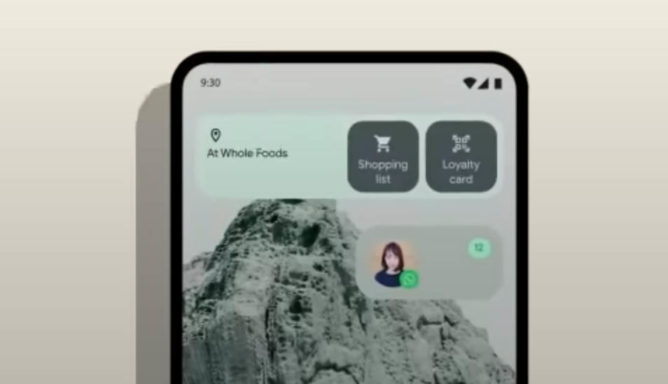 According to the report, shopping lists might be the beginning of a significant expansion for Google's home screen widget. Live Space might eventually show everything from stocks and sports scores to your sleep results and shortcuts to Driving Mode. While this could be another Pixel exclusive feature, there's always a chance it arrives on other devices in a semi-limited fashion, just like At A Glance before it.

This latest Assistant feature lives in the latest beta for the Google app, but it has yet to appear since it's tied to Android 12. You can still download the latest version from APKMirror.

Nvidia Shield TV is getting a Google TV-like facelift