The OnePlus 8T might not be the company's newest flagship device — that would be the 9 and 9 Pro — but it's still a capable performer in its own right. In fact, it can be difficult to pick between those devices if you're shopping for a new phone. Your decision just became a whole lot easier, as you can pick up an unlocked OnePlus 8T from B&H and OnePlus for just $550 today.

This model comes with 256GB of storage and 12GB of RAM, beating out most other devices you can get around this price point. It also features dual-SIM and support for all carriers in the US. Though you won't be getting the Snapdragon 888 found inside the OnePlus 9, the Snapdragon 865 is more than enough for most users. You still get a 120Hz AMOLED display, decent battery life, and the company's signature fast charging technology. Compared to other sub-$600 devices, this is a no-brainer — as long as you don't care about camera quality. 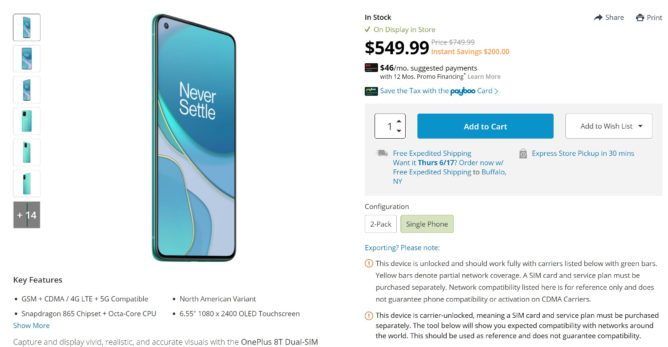 If you've been dying to upgrade an aging device — say, a OnePlus 6 that AT&T won't support after the death of its 3G network — this is as good a time as any. Just head to either retailer using the links below to pick up your phone.

This deal is now also available directly from OnePlus.

Your Chromebook is getting a new wallpaper feature from... Windows 10?

What's going to happen to your Kindle after the AT&T 3G shutdown?