Hunting for that perfect family photo or stylish Unsplash pic to use for your PC and smartphone wallpaper can be time consuming, especially when you get around to applying it everywhere. That situation is mostly unchanged with Chromebooks — the exception being with its stock backgrounds, which can magically sync across all your Chrome devices when applied. Chrome OS started testing sync for custom wallpapers a few months back, but the ability got pulled shortly thereafter. There's been radio silence on whether the feature will come back — until our discovery made today.

We've spotted a new commit over at the Chromium Gerrit that shows Google's ongoing work to sync a user's custom wallpaper across multiple Chromebooks. While it isn't available to test in any of the Chrome OS channels yet, the following code shows that Google is getting ready to add custom background syncing: 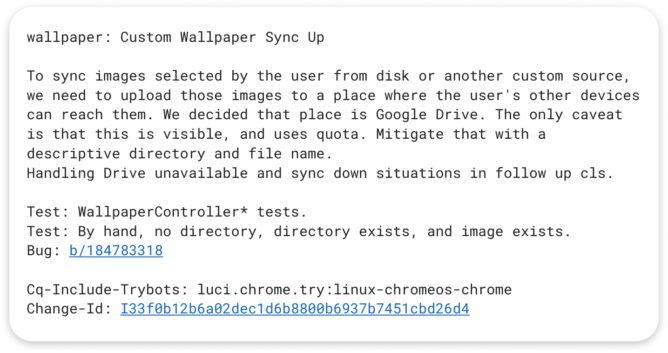 Work-in-progress effort that will allow Chrome OS to sync your custom background across your Chromebooks.

The commit above illustrates how Google will carry out its plans to sync a user's custom background. When someone downloads and applies a wallpaper on their Chromebook — either from a website or with an app like Backdrops — Chrome OS will store it on the person's Google Drive, allowing their other Chromebooks to grab and apply it. To reduce the wallpaper's visibility and space on their Drive account, Chrome OS will tuck the image into a separate folder and modify its name. It's unclear how storing a photo in a different directory will reduce space — time will tell when Google fully implements it in the future.

This greatly improved wallpaper sync will undoubtedly help speed up the tedious process of applying new wallpapers across all my devices. Sure, there are people who are totally fine using a solid color backdrop, or a stock Chrome OS background, but there are many like myself who'd like their desktop personalized to them. It's a small quality-of-life polish, but it feels like a step in the right direction to make Chrome OS even more appealing. Here's hoping the wallpaper app will eventually allow selecting an image from a Google Photos album like the screen saver feature.

'Enhanced notifications' replace Adaptive Notifications in Android 12, but they're basically ...

Why buy AirPods Max when you can get an entire OnePlus 8T for the same price?