Smartphone gimbals have progressed quite a bit over the years, first serving just as tools to keep the image steady, but eventually evolving more targeted features and designs. Zhiyun released the Smooth-Q2 in 2019, and its small size and sturdy design made it ideal for travel. Now the brand new Smooth-Q3 is out, but this time the design and features are directed toward vloggers and social networking. 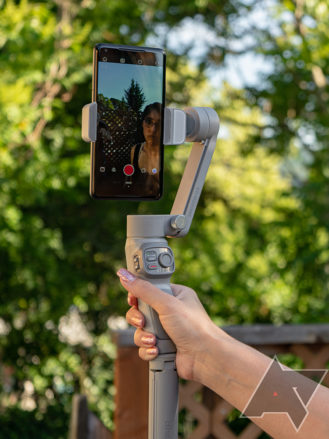 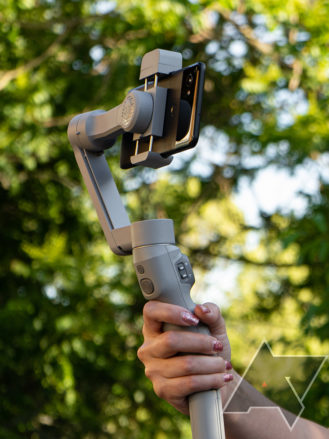 The Smooth-Q3 is a 3-axis smartphone gimbal, meaning it's designed to keep your camera level and eliminate shake by making rapid micro-adjustments to the tilt, pan, and roll of your smartphone.

Unlike most gimbals I've encountered, the Smooth-Q3 was designed for vertical video like you might post to TikTok, Instagram, or YouTube Shorts. In fact, it automatically starts up in portrait orientation. It's easy enough to switch to landscape, and that orientation works fine with most phones, but it can put really tall phones in a position to bump the gimbal arm when tilting the handle too far forward. For example, my Pixel 4 XL has maybe 1cm of clearance. 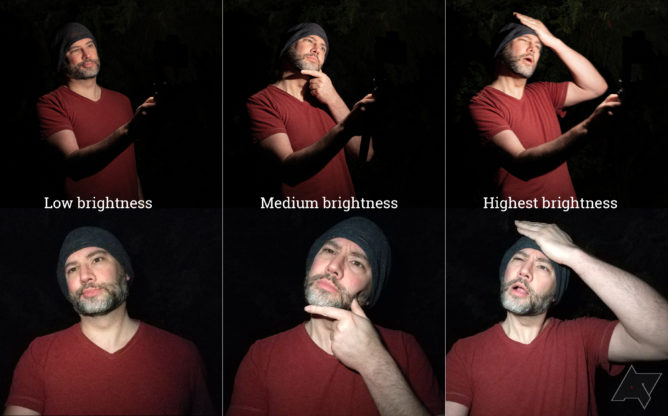 The phone clamp comes equipped with a small LED panel on top, and it's primarily meant to point back at the holder of the gimbal, but it can also be twisted around to point forward. The light is slightly diffused and has three brightness levels, but none of them are quite intense enough to be blinding. The low or middle settings are probably best for lighting yourself while the max setting is more suited for things like exploring a dark room or splashing light on a hiking trail at night. I made a simple reference comparison above was shot outside in the middle of the night with no other light sources, only the gimbal was lighting me. The top row was shot with a Sony a7iii (dedicated camera) with settings locked down to show different lighting intensity; and the bottom row was taken with a Pixel 2XL positioned in the gimbal clamp.

The gimbal arm slides down on a rail for easier packing just like last year's Smooth-XS, but there's now a thumb screw on the Smooth-Q3 to keep the arm from sliding. The two motors on the arm also lock so they don't swing around; and while the base motor doesn't lock, it can't swing more than a few degrees with the arm retracted.

The body and gimbal arms are made of hard plastic and they'll hold up to normal wear and tear, but I'm concerned the rail might break easily if it encounters jarring or crushing. At the very least, I wouldn't risk putting it in soft luggage or a backpack if an over-caffeinated airport baggage handler gets ahold of it. 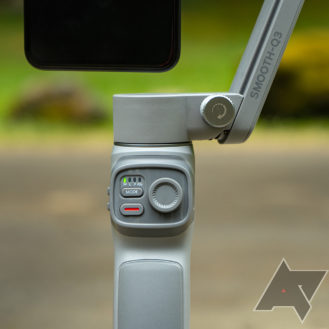 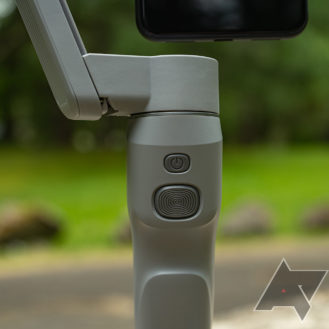 The front control panel is similar to most gimbals, sporting a low-profile joystick, a mode button, and a record button (app required). On the left side is a jog switch for zooming, and around the back is a trigger button and power button. Holding down the trigger enters sport mode for high-speed movement, and it can also be double-clicked to return to center position or triple-clicked to flip between landscape and portrait. This is probably the best layout for the controls I've used on a smartphone gimbal, mostly because I love having the trigger button — I only wish it could be remapped to different follow modes. 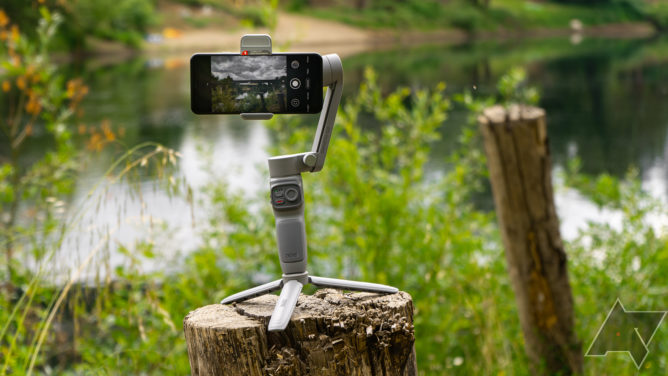 Naturally, there's a USB A-to-C cable in the box, along with a small tripod. The tripod is great for setting the gimbal upright to make time lapse videos and panoramic photos; but it's also very useful as a handle extension.

For an extra $20, there's also a combo pack that adds a soft carrying case, wrist strap, and a 1-year Zhiyun Prime membership card (this unlocks additional software features in the app).

The Smooth-Q3 only really benefits from balancing in your intended orientation, and it's easy to get it close with a few seconds of nudging, but you'll probably never bother with getting it perfect.

I'm getting about 10 hours of battery life on a charge, but Zhiyun estimates 7 hours with normal use, which sounds about right if the balance is a little off.

There wasn't any jank or weird performance issues with normal operation, and all of the video turned out really smooth and level. I've also taken it out hiking and it held up as expected.

However, when it came to more challenging tests, what we might think of as filmmaker/cinematic moves, things get a bit dicey. It's fairly easy to confuse the Smooth-Q3 by inverting the handle, which causes it to lose orientation or shut off. It also doesn't like when the handle tilts forward or backward more than about 45 degrees, which changes the orientation of the phone even after the handle moves back to an upright position. It's easily fixed by double-clicking the trigger or using the joystick, but still not ideal. These types of issues are typically fixed pretty quickly with firmware updates.

As for add-on lenses like those from Moment, they'll do okay in portrait orientation, but not so well in landscape. The point of equilibrium is almost on top of the lens, so the phone needs to slide to the right for balance, and then it's likely in the way of the gimbal arm. Put simply, don't bother mixing add-on lenses and landscape orientation, it's a bad combo on the Smooth-Q3.

I admit that I rarely use the ZY Cami app with the gimbal, but it's not because there's a problem with it. In most situations, I'm either using the native Google Camera app for its better image processing, or I'm popping open an advanced camera app like FiLMiC Pro for precise video controls. However, there are several modes in the ZY Cami app that control gimbal motion to accomplish things that aren't possible otherwise, and there are two in particular that I have started using.

The simplest feature, and one that has been around for quite a while, is the 180-degree panoramic mode. If I have a moment to stand still, the gimbal simply angles the phone to capture seven segments of the surrounding scene and stitches together the results.

But the real killer feature is the object tracking, which is great for people making videos to post on TikTok, YouTube, Instagram, or anywhere else. All I have to do is draw a box around my face and start walking, and the gimbal will adjust its angle to keep me mostly centered in frame. I went out on a hiking trail and the camera remained centered on me automatically so I could focus my attention on walking the uneven terrain. It's not perfect and the tracking occasionally needs to be reset, but it's easy enough to spot on the screen if the tracking box goes red.

Naturally, all of the other features and modes found on other models are available, like gesture controls, timelapse, and hyperlapse; but Zhiyun has also introduced a few new features, like Dolly Zoom and MagicClone, a function that creates a pano where you can pose in several places in the same photo. And the app also contains templates for creating stylized videos.

If you choose to pay for Zhiyun Prime (or activate the credit from the combo kit), there's also an editor if you want to do some of the work yourself. The app also shows an option is coming that allows you to use a second phone as a remote control, and this too requires Prime, but this feature hasn't actually launched just yet.

Possibly. For the content makers and influencers targeting vertical video, this is the gimbal to get. Between the emphasis on portrait orientation and the LED light, it's really clear that this model is for vlogging and livestream style videos, and even something a little more free form like TikToks and YouTube Shorts. It's also easy to use and the lowest priced 3-axis gimbal Zhiyun makes, which makes it a good option if you just want something for filming local events and gatherings.

However, if you're looking for the ideal travel gimbal, I would sooner point to the Smooth-Q2 for its durability, or even a Smooth-X or XS since they're tiny and cost a bit less. Likewise, aspiring mobile filmmakers will probably get more out of either the Crane M2 or the Smooth 4 (though that seems likely for a refresh sometime soon). They're all great, but they're all different and aimed at different users.

Chrome OS will work better with all monitor orientations soon