OnePlus continues its Moto-like flood of phones for every price point with the new Nord N200 5G. Like all phones in the Nord lineup, it's priced aggressively. You get a 6.49" 90Hz display, Snapdragon 480, 4GB of RAM, 5,000mAh battery, and a "triple-camera system," plus 5G connectivity, and all for $240 — a pretty stunning price. Unfortunately, that's about all the specs we can share, OnePlus tells us the rest is still under embargo for some inexplicable reason. Sales open Friday, June 25th at 11AM ET, and the phone will also be available via T-Mobile and Metro by T-Mobile. The phone looks to be based on the Oppo A93 5G and follows up on last year's N10 5G and N100, as well as the recent Nord CE. Last year's $300 Nord N10 5G allegedly sold quite well at T-Mobile while also earning Consumer Reports' "Best Budget Phone" accolade. That's an assessment we disagreed with in our review, but opinions vary.

This new N200 5G may have lower-end specs, but it's not that much of a compromise over the N10 5G. Qualcomm's Snapdragon 480 sounds impressive on paper, sporting significant upgrades for the usually entry-level 400 series, including a much more modern architecture for its "big" performance cores. There's more to it than that, but it should be pretty snappy, paired with 128 GB of storage and a slightly anemic 4GB of RAM — not too bad for the price, but not future-proof by any means. 5,000mAh is also more battery capacity than the N10 5G had, though this charges more slowly at just 18W vs. the N10's 30W Warp Charge 30T.

Unfortunately, OnePlus tells us the remaining device specs are embargoed, so we can't discuss camera details outside of telling you it has a three-camera system with a 13MP primary and a 16MP front-facer. (I hope the other two rear cameras aren't just vestigial portrait or macro cameras.) We also can't tell you what display technology the 6.49" 90Hz FHD+ screen uses, though the size of the chin in the renders and promotional images imply TFT/IPS. Software details are also still embargoed, so all we can tell you is: It probably runs Android. We can't tell you what version or what kind of update schedule will be promised. 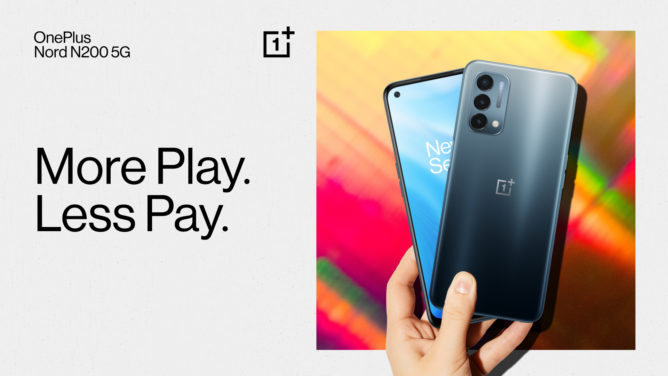 OnePlus CEO Pete Lau previously told PCMag that the N200 5G would cost less than $250, and it does hit the mark with $10 of wiggle room. Like last year's N10 5G, OnePlus's exclusive US carrier partner for the N200 5G is T-Mobile (and its Metro subsidiary), where the phone will support the company's 5G network. We can safely assume sub-6 GHz only, but if you haven't noticed the theme here yet: That's still embargoed. Amazon, Best Buy, and B&H will also sell the phone.