Back in 2020, Google announced it was retiring its Fiber TV service as it refocused efforts to expand internet availability. It made sense — after all, YouTube TV fulfills the same need for consumers with added convenience. Now, Google is making it even easier to move away from its old Fiber TV service by offering users the chance to upgrade to a Chromecast with Google TV and a new router.

Google initially tested this promotion with 50 households in Huntsville, Alabama, and the results were positive enough that it's been expanded to every Fiber TV subscriber. Under this plan, every Fiber TV box you have is replaced with a free Chromecast with Google TV unit, while your router is replaced with a Google Wifi device. This upgrade cancels your TV subscription — a $105/month charge, not including hardware fees — opening up the option to sign up for YouTube TV, Fubo, or any of the various live TV apps available through the Play Store. 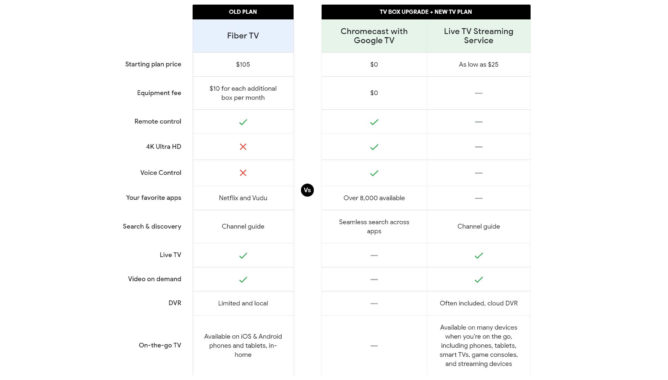 Overall, it's an unbeatable deal for anyone still subscribed to Google's legacy TV service. What you do with the Chromecast devices is totally up to you; there's no requirement to sign up for a streaming service to replace your outdated Fiber plan. Using this promotion, your hardware is free, your cable TV price is (probably) reduced, and you can continue to enjoy internet speeds far beyond what most of the US can access. Meanwhile, all I got was this lousy Spectrum t-shirt. To get your free gear, just head to the Fiber TV upgrade site.

The blobs are back in the latest Emoji Kitchen update, together with contextual recommendations