As part of today's big announcements from Google, the company snuck in a bit of a surprise: Separate from the embargo details we were provided, Google is also announcing that end-to-end encryption for Chat/RCS messages in Google Messages is now out of beta — at least, for one-on-one conversations.

The feature first landed in the Google Messages beta late last year, and while there's a whole whitepaper you can read about how it works, the short version is that it makes your RCS Chat-based conversations in Google Messages secure in a way that can't be read in transit — and that includes by Google itself. With RCS/Chat now available to the whole world via Messages, that means there's only one last catch: This feature is only live for one-on-one conversations, not group chats.

Reports at the Universal Profile subreddit indicate that end-to-end encryption is starting to appear on devices that have not opted into the Google Messages beta, so this is the start of a wider, general rollout, though it may not be live for everyone just yet. 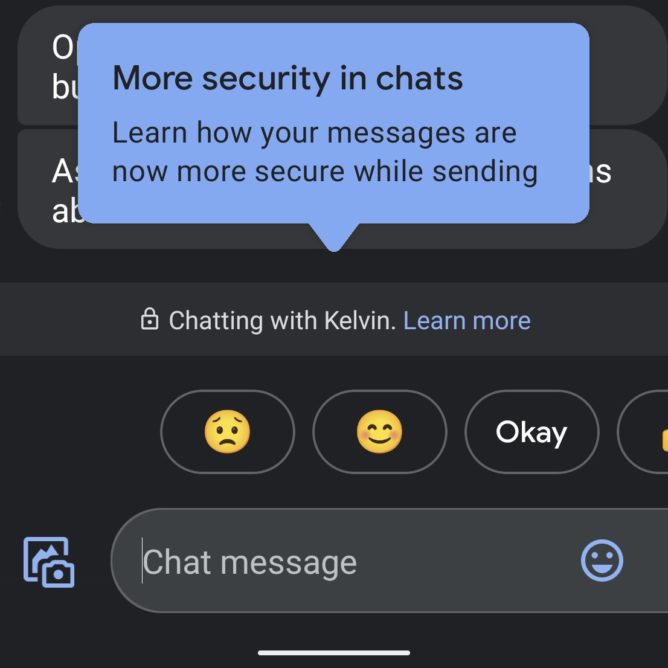 What an encrypted Chat conversation looks like in Messages.

To check for yourself, fire up an RCS conversation in the Google Messages app with someone else and see if you have the little lock icon that appears in supported conversations — it should be accompanied by a notification as well when the feature lands, as seen above.

Mobvoi's Android app for TicWatch gets an all-new design, complete with fitness reports

The blobs are back in the latest Emoji Kitchen update, together with contextual recommendations