Google rebranded G Suite into Workspace last fall, bringing along new icons and some fresh features to help keep users working from home organized and in control of meetings, emails, calendars, and more. Today, Google announced some major changes for Workspace, including an individual plan for small businesses, an introduction to Spaces, and new RSVP options in Calendar — and it's making it available to everyone.

Though Workspace being made for "everyone" might sound like a sweeping change, it's more complicated than you might expect. Anyone with a Google account can switch over to the Workspace layout for Gmail, Chat, and Meet by heading into your Gmail settings. Moving from Hangouts to Chat converts parts of the Gmail interface with updated icons, menus, and more. It's not quite as grandiose as "Workspace is coming to every user" sounds, but it's still a big change for one of the web's most popular services.

The announcement says all three billion accounts now have access to all of Workspace, but there are likely a few qualifiers to keep in mind that are left unmentioned. For example, Workspace users won't have Docs and Sheets files count against storage until February, but that deadline passed for personal accounts two weeks ago. While it seems like services will be all accessible to any Google account moving forward, some advantages and benefits will likely be left behind a paywall.

Thankfully, we know of at least one Workspace feature coming to everyone: Google is transforming Rooms into Spaces within Google Chat. Planned for a launch this summer, Spaces is designed to offer a streamlined interface for working on group projects, with integrated chatrooms, message pinning, custom statuses, in-line topic threading, moderation tools, and task assignment. It looks much easier to navigate than when Rooms launched last year for Chat. It'll be available to anyone who enables Chat as Gmail as part of "Workspace for everyone." 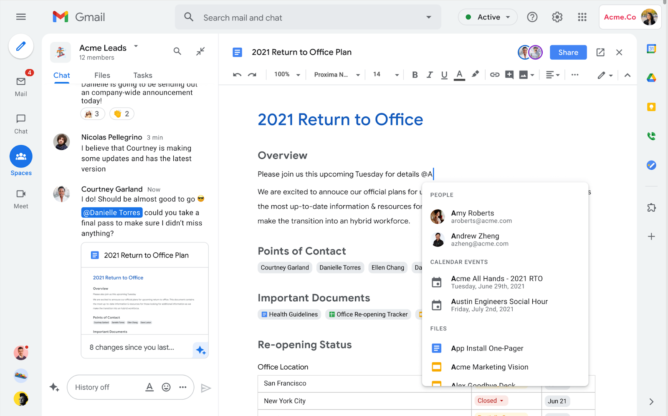 Meanwhile, Google is launching a new subscription model for individual business owners to make the switch to its platform. Workspace Individual is designed for those who aren't working within teams, offering booking services, video meetings, and email marketing tools, all within an existing Google account. It'll cost $9.99 per month, and it's coming "soon" to users in the US, Canada, Mexico, Brazil, Australia, and Japan.

Finally, as part of today's announcement, several updates to both Workspace and Meet are coming soon, including "Companion Mode" for interactive controls on video conferences, new ways to RSVP to hybrid meetings in Calendar, and client-side encryption for Meet this fall. It's clear that Google is placing a significant focus on "getting things done" this summer, and the easiest way to do that is to start making Workspace-exclusive features available for anyone who wants them.