With WWDC officially in the rearview mirror, it's obvious that iOS 15 is more about polishing up last year's features than it is boldly treading new paths. That shouldn't be too much of a surprise for anyone paying attention to Apple's software — the company usually follows a tick-tock release for hardware and software alike. iOS 15 brings along some nice enhancements, especially for anyone deep inside the Apple ecosystem, but there's always room for improvement. As someone who cycles back and forth between Android and iOS, there's plenty of things I wish had changed in this year's version.

Real widget support finally came to iOS last year, with the first significant redesign to the home screen since the original iPhone launched way back in 2007. iOS 15 includes some new system widgets, including Game Center, sleep tracking, and more, but it's just not enough. You can't interact with widgets the same way you can on Android, and that leaves something as basic as even a widget for music controls impossible to develop. 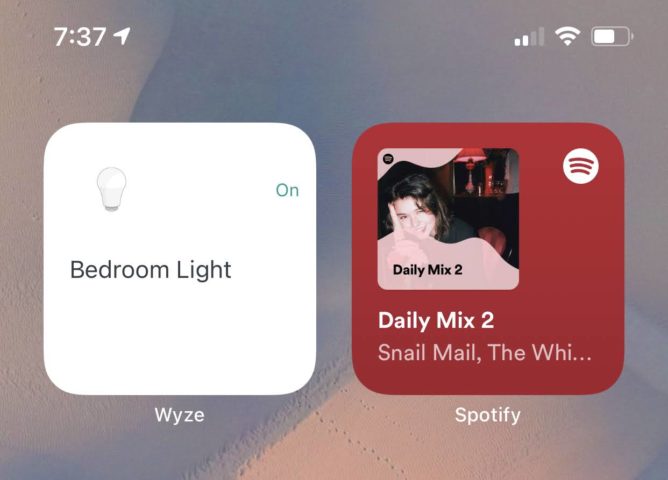 These are just glorified shortcuts.

Apple succeeded in pushing Google to boost its widget game in Android 12, but it seems unwilling to go any further than "looking nice." Until I can actually turn lights on and off from my home screen, widgets on iOS remain nothing more than a larger tile for your grid.

Remember when iOS 14 went public last year, and Twitter was overwhelmed with people spending hours theming their phones for the first time? While it's possible to change out your icons on iOS, it's a real hassle compared to how Android has managed icon packs for years now. Apple could've seen the response to themes on social media as a way to streamline and modernize customization on phones, but instead, users are stuck spending hours changing app icons one-by-one. There's no robust theme engine or anything that even comes close to how Material You works in Android 12.

Turned my iPhone into a NookPhone with iOS 14! Icons made by okpng on Twitter via /r/AnimalCrossing https://t.co/0RoD5AylqH #acnh #animalcrossing pic.twitter.com/lDoACEpEN1

At my core, I know why this one didn't happen. Apple has positioned itself as a services company in recent years. Allowing users to switch from Apple Photos to Google Photos as the default gallery would reduce the need for iCloud subscriptions, an utterly counter-intuitive goal. Still, with default apps now established on iOS, it seems like only a matter of time before this opens up more — whether Apple wants to or not. And speaking of Photos...

This one is a major whiff. With free backups dead on Google Photos, Apple had seven months to prepare some kind of upgrade to their own Photos app to convince users like me to make the switch. Instead, Apple continues to play catch-up with some new Memories features, a "Shared With You" menu, and improved person identification. These are all things Google's own service continues to excel at, which leaves me with no impulse to try out a new service right at a time when I'm most likely to move between apps. A real missed opportunity.

If you haven't used iOS recently, you might not even know that iPhones have a proto-app drawer to the right of the home screen. Apple added an App Library to iOS last year, which finally made it easy to hide all of your non-essential apps without relying on folders. Unfortunately, the App Library is pretty limited in scope, with auto-generated folders of apps by type, along with suggestions and recent additions at the top of the screen.

I guess the Phone app is technically social?

Apple hasn't made any changes to the App Library in iOS 15 — aside from building it into iPadOS — which is a shame. Even a tiny amount of control over how apps appear in their folders would be a major step up from how the page exists right now. It's far from unusable, but even the ability to rearrange folders would go a long way in improving the utility.

The default keyboard on iOS sucks, and while Gboard is available in the App Store, third-party keyboards are so completely hamstrung that they aren't even worth downloading. Comparing Gboard on Android and Apple's keyboard makes iOS look stuck in 2013. Where's the optional number row, clipboard managers, GIF shortcuts (outside of iMessage), or anything else that makes Gboard feel so modern? All we got this year was a new magnifying glass cursor for selecting text — and that's just returning a feature taken away several years ago. At the very least, Apple, please let me enable haptics on your keyboard.

No, it was never going to happen. Yes, I still want it to happen. iMessage is genuinely great, especially in the US, where it reigns supreme over alternative third-party apps like WhatsApp or Telegram. My main group of friends has come to rely on Facebook Messenger for communicating with each other, but even basic RCS support could make it easier to switch away from Facebook altogether.

This conversation took twice as long as it could have with RCS.

At this point, there are enough features exclusive to iMessage that Apple shouldn't have to keep essential tools like read receipts and typing indicators to itself. SMS is outdated, and Apple should let all users — regardless of operating system — gain access to messaging basics in 2021.

Admittedly, this would've been a small addition to Apple Health, but it was so heavily rumored that it's hard not to be disappointed it didn't happen. If you haven't used a modern food tracker app lately, you don't know how rough it is. Good luck trying to view macronutrients from any service without signing up for a subscription. As frustrating as it can be when Apple decides to destroy established services with first-party offerings, food tracking should absolutely be built into Health. Oh well, there's always iOS 16. Until then, you can find me renewing up my subscription to Lose It! this fall.

Look at everything kept behind a Premium plan in Lose It!.

My iPhone 11 Pro Max is huge, and its successor is somehow even larger. If Apple wants me to stick with the biggest (and most expensive) screen possible, it needs to get onboard with optimizing its software. I should be able to check my messages and watch a YouTube video simultaneously on this phone, or leave open my music player with Google Maps up for navigation. This issue becomes more glaring — and more embarrassing — with each passing year.

I'll be honest: WWDC this year was boring, especially compared to Google I/O last month. iOS 15 was always destined to be a "tock" upgrade considering the significant changes Apple introduced last year. While there are plenty of quality-of-life improvements to look forward to — including some exciting changes to FaceTime and that new SharePlay API — there's just nothing in the latest version of iOS that makes it worth counting down the days to this fall.

The most impressive moment during WWDC happened when Apple showed off Universal Control as part of macOS Monterey. That's the kind of futuristic stuff that makes Apple's events worth watching, but it wasn't there on the mobile side. iOS 15 might boost the experience of using an iPhone day-to-day in ways none of us have seen just yet, but for now, there's nothing here to blow anyone away.

A lot of these may seem like obvious candidates, especially because Android is capable of handling nearly everything on this list. Still, as someone who wants to see both platforms do well each year, it's tough not to feel disappointed about iOS 15. Apple is slowly learning to treat its users like adults who understand technology, but it just can't escape its own bad habits.