Dark mode has been soaring in popularity as a design trend over the last several years, and for good reason — it minimizes eye strain when using computers over extended periods (Editor's note: It also looks slick AF). With major platforms like macOS, Windows, and Android offering darker shades, it became clear Chrome OS had to catch up with the pack. Dark mode is still in ongoing development despite work on it dating back almost a year now, and it looks unfinished — even today. But Google hasn't thrown in the towel here, and it's now adding another highly requested feature to make dark mode even better.

We've been tracking Google's ongoing effort to improve Chrome OS customization through its system preferences (like custom virtual desks settings, but that got canned, sadly). An ongoing commit adds a toggle under Personalization to turn on dark mode, and it's paired with a way to schedule it based on the time — a highly requested feature by many. 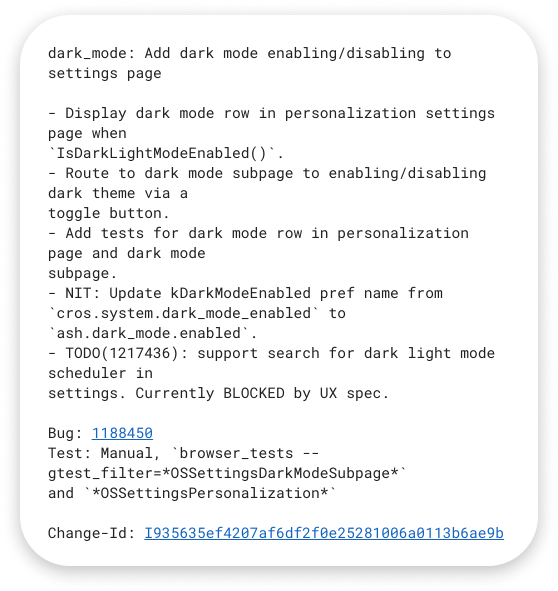 Scheduled dark mode for Chrome OS is in the works.

The commit message above describes how Google will hook up dark mode into Chrome OS settings. While most of it is developer jargon, there are a couple of notable takeaways here. On the third bullet point, the developer talks about adding a dark mode subpage under Personalization, meaning you'll be able to adjust the way Chrome OS applies it. The last two points describe what you'll be able to customize if the code gets merged, and this is where things get exciting. Google is planning to add scheduled dark mode, complimented with the ability to keep Chrome windows light while using a dark system UI. It's unclear whether you can change dark mode to activate based on sunset and sunrise times, like with Android.

It's about time! Many people like myself have grown to love dark mode on our devices — whether on a smartphone, laptop, or desktop. Besides the dark hues being aesthetically pleasing, it helps mitigate eye strain at night, especially during prolonged device use. On a busy day, I'd prefer this to all be automatic, based on the time, rather than going into settings and toggling it on manually.

While automatic dark theme and the ability to customize how it gets applied is a win for many, I'm cautiously optimistic about it. Right now, the commit is labeled "Active," so Google could decide to scrap it at any point, like with customized virtual desks. Here's hoping it won't — and Google, let's not forget about that blindingly white startup animation!