We'd heard that Google was working on a double-tap gesture for its Pixel phones as far back as January, and at least some of the infrastructure was present in March. But apparently it took this long to get the thing actually working. With Android 12 beta 2, the option to double-tap the fingerprint sensor and perform various shortcut actions is alive and kicking, and it's been renamed "Quick Tap." 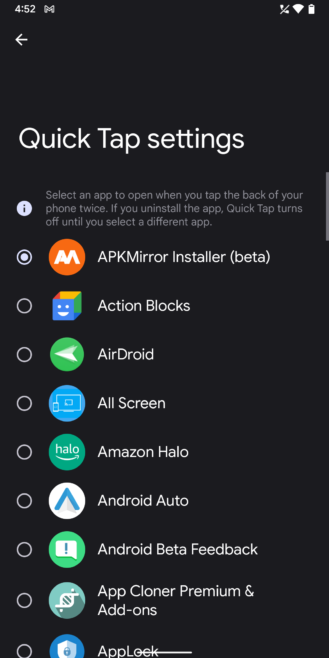 Well, for some phones at least. Testing it on my Pixel 3a XL did nothing — while I can see the Quick Tap menu by searching the main Settings menu, and I can even configure it for screenshots, launching Assistant, a play/pause button, recent apps button, showing notifications, or launching a custom app, it isn't actually working on my phone. We tried out the same options on a Pixel 5, and on the newer device it seems to be working like a charm:

So if you're rocking the latest beta, give it a go. It's pretty handy (indeed, this kind of thing has been done with third-party apps and custom ROMs for years), just know that your mileage may vary. I'd guess that the Pixel 4a and 4a 5G should be working, too, but I don't have any handy to test.