Usually, when Google announces Android previews or betas, the company focuses on developer-oriented details like new APIs. But, as Android 12 Beta 2 rolls out today, Google is hyping up long-awaited user-facing changes, like the new Privacy Dashboard, the microphone and camera access indicators it's been working on in various forms since 2019 (plus quick settings toggles for both), and a new "connectivity experience" that makes it easier to switch between data sources.

Google announced that both the Privacy Dashboard and indicators would land as part of Beta 2 back during I/O, and though we haven't had a chance to play with them ourselves yet, we have a good idea of what to expect.

The privacy dashboard shows you an overview of permissions requests, plus a more granular timeline of when apps have requested permissions for things like your location, camera, or microphone, with a layout that's reminiscent of Digital Wellbeing. The tool won't make your phone or apps suddenly more private by itself, but it should make it a lot easier to audit precisely which apps are accessing what and lock things down if anything feels wrong.

For developers, a new API and intent make it easier to design apps that accommodate these privacy-respecting changes.

There's also a new toast notification that shows when an app accesses the clipboard, similar to what Apple offers on iOS. Since some of us copy things like account credentials or contact details, it's nice to know when an app is snooping into your clipboard and potentially violating your privacy. And the new Clipboard read toast notification won't appear if the app reading from the clipboard is the same one that copied stuff to it — in that case, you probably don't care that it's happening. 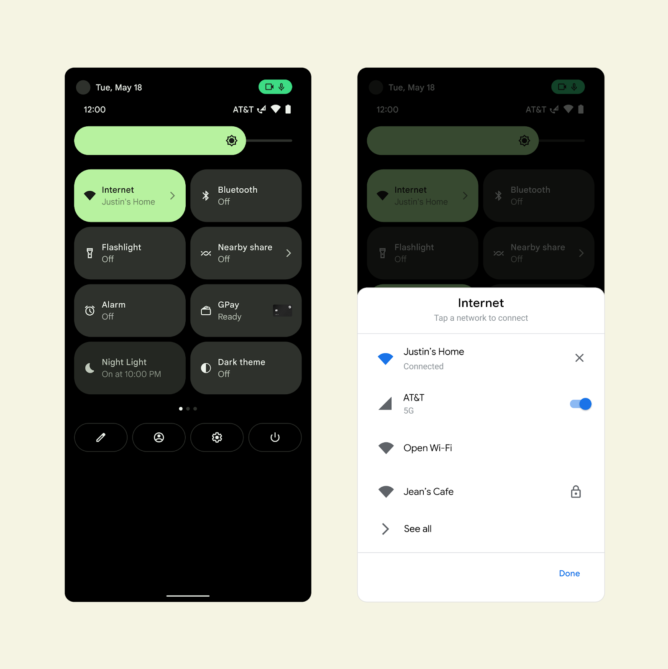 Lastly, there's the big new Internet Panel, which Google claims will make it easier to manage your connection — and which seems like it might merge the Wi-Fi and Mobile data quick settings toggles into one, based on the image Google provided. I don't know if that's true yet or not, but it does look like a more intuitive and simple way of managing Wi-Fi and cellular data connections quickly, with an interface that meshes well with other quick-access Android menus like the expanded volume controls.

Just 2-3 non-bugfix releases remaining. (A release candidate, not shown in this image, is also planned.)

Android 12 Beta 2 should start rolling out in the coming hours/minutes. As usual, this is an opt-in update for the Pixel 3 series and later Pixel devices, but expect other manufacturers participating in the beta party to roll out their own beta releases soon — hopefully without soft-bricking any devices this time.

If you aren't in the beta program yet, it's easy to join, though you can also install it manually or try Android 12 via a GSI on supported devices. Just keep in mind that these releases still aren't fully stable. I ran into some pretty severe bugs with Android 12 Beta 1, but that's not a universal experience. Either way, I would encourage you to hold off if you're considering playing with this latest release on your only phone — and be sure to provide detailed developer feedback for Google if you do run into any problems.