Google has been busy bringing new features to its hardware in the last week, with the June Pixel Drop including a lot more than we expected. As the Fuchsia-and-Flutter-based update for the OG Nest Hub continues to roll out, another set of features is also rolling out to Nest smart displays, though Google's changelog skips out on one big tweak: an on-screen keyboard.

The feed in the Google Home app lists events that have been happening in your house, like new devices joining your Wi-Fi or someone ringing the doorbell. Now you can customize this feed to hide entire event categories, helping you focus on the most important ones.

When setting up a Nest display or speaker for the first time, you can add household contacts on speed dial for everyone in your house. Guest Mode is expanding to support more languages, including French, Italian, German, Spanish, Japanese, and Korean.

Google is also adding table booking to Nest displays, but there's no timeframe for when this will be available. When it is, you'll be able to "hey Google" your way to dinner right from your Nest Hub. You'll also see a book table suggestion clip whenever you look up a restaurant from the display. 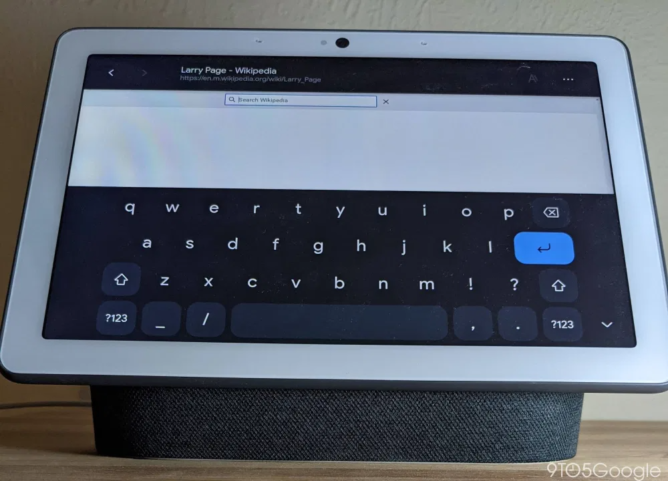 9to5Google spotted some significant changes to the browser found on Nest Hubs, too, including an on-screen keyboard. You can open the browser by performing a voice search for “Who is Larry Page?” or “What’s the Higgs boson?” Tapping the Wikipedia button at the bottom of those results will open a browser that features an app bar up top with controls for forward and back, as well as text size.

There's also a three-dot menu that lets you refresh the page, report it, or send it to your phone. Tapping this menu used to open a full-screen window, but now it behaves like a proper overflow menu that doesn't take you away from your content.

The biggest change here is implementing a Gboard style keyboard that will appear when tapping a text field on the site you're viewing. It looks similar to the ChromeOS keyboard, with rounded borders around the spacebar and function keys. While Nest displays don't make for the best web-browsing experience, at least it's now possible.

Google doesn't say which software version will include these changes, and the rollout of features explicitly may vary. However, 9to5Google spotted the new keyboard on firmware v1.54.

As a Mac user, it's getting harder and harder to stick with Android