If you want cheap smart home gadgets, Wyze is increasingly at the top of the list. It has cameras, vacuums, other cameras, wearables, a smart lock, and still more cameras. They're all a bit cheaper than the competition, but that doesn't automatically make them a good deal. In the case of the new outdoor plug, though, it definitely is a good deal. For a mere $16.98 (shipping included), you can get a capable outdoor plug that integrates with Alexa and Google Assistant.

The Wyze Plug Outdoor is a small, unassuming black box. There's a short three-prong AC plug on one end that goes in your outdoor power outlet. Opposite that are your two smart outlets. There are physical buttons to control each of those plugs on the unit itself, and there's a single LED next to the buttons that indicates connection status. This is one of the more compact outdoor plugs I've used, particularly among those with two outlets. It's rated IP64 for water and dust protection, and I've encountered no problems after leaving the device outside in freezing, sweltering, and wet conditions over the past weeks (springtime in Minnesota is bizarre). 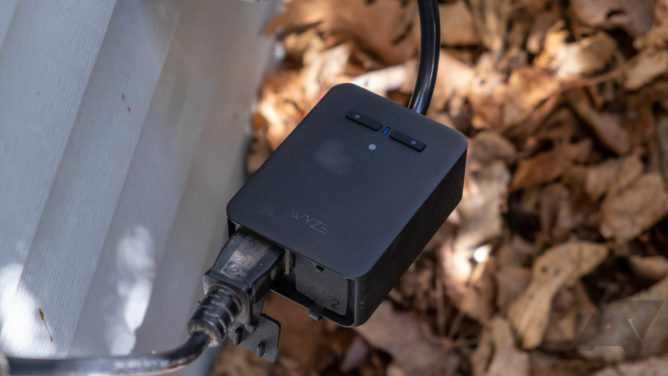 Wyze includes outlet covers to protect the plugs when they're not in use. I only have one outdoor device (string lights) connected, so one of the plugs had been covered for most of my testing. My only gripe with the covers is that they aren't permanently attached. The rubber tether just pokes into a hole in the back of the plug enclosure, and they come out easily. I foresee people losing these.

The Plug Outdoor connects directly to your Wi-Fi network without any go-between hubs or other hardware. I've found it to connect reliably to my network, even though it's outside at the far end of the house from my router points. Depending on where you have the plug, you might be able to take advantage of additional automation via the light sensor. It's right on top of the plug body, allowing you to have the plug turn on and off based on outdoor brightness. My Plug Outdoor is tucked away behind a large shrub, so I haven't gotten much use from the sensor. It is a nice bonus, though. 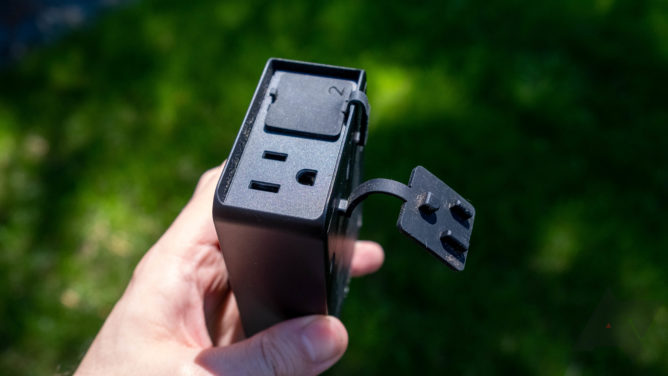 Unsurprising for something that costs so little, the Wyze Plug Outdoor doesn't come with much in the box. You get the plug itself, a quick start guide, a tiny mounting bracket that attaches to the cable, and a Wyze sticker.

Setting up the Wyze Plug Outdoor is a breeze, even if you've never used the Wyze app before. Just open it, tap the '+' button, and tell it what device you're adding. I didn't have any issue connecting to the plug, and it appeared immediately in the app. You can control the plugs independently, but the power usage metrics are for both plugs together. That's a bummer, but it's nice to see this feature at all for under twenty bucks. The more expensive TP-Link outdoor plugs don't have energy tracking at all.

You can control the lights from the Wyze app without any additional setup. For a lot of smart home devices, that's not a selling point because the app is terrible, but the Wyze app is excellent most of the time. You can set up schedules (including with the aforementioned light sensor) and automation from the app. There's also a one-tap Vacation mode, which turns the plugs on and off at random intervals to make it look like you're home.

However, even a good app isn't as easy to use as a light switch. A voice assistant can be almost as good, though, and the Wyze Plug Outdoor supports both Assistant and Alexa. I prefer to manage my smart home whatnots from the Home app or Assistant, and the Wyze plug has worked just fine in that respect. Unfortunately, there's no support for HomeKit or Siri.

Yes. It's not a perfect product, but at 17 bucks, I can't complain too much. Smart plugs are not complicated products, and they don't need to do much besides turn on and off reliably to be "good." The Wyze Plug Outdoor checks all the boxes with easy setup, good outdoor durability, independent control of each outlet, and voice assistant support. It's nice that it's also dirt cheap.

Outdoor plugs used to be more expensive—TP-Link's last outdoor plug was about $50 when we reviewed it. This device has come down in price a bit, and other outdoor plugs have appeared in the $20-40 range. The Wyze plug is only a little cheaper, but it's at least as good as the competition, and therefore is a shoo-in for Most Wanted. 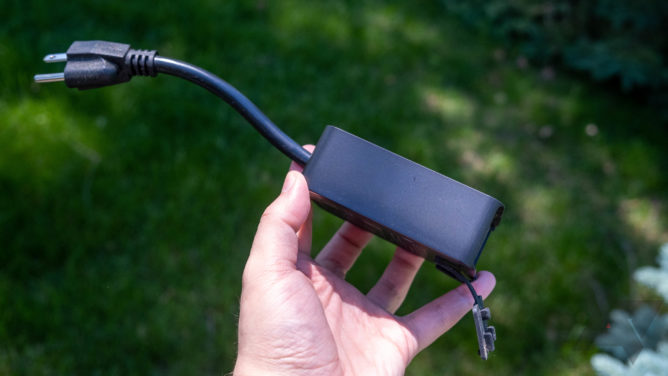 Our favorite Chrome flags you should try on your Chromebook