Do you recall when you were a kid, and there was nothing quite so fascinating as an old-fashioned spring doorstop? You know, the kind that goes "sproi-oi-oi-oing" with any errant tap? A Reddit apartment dweller, having presumably endured one late-night Riverdance rehearsal too many, decided to weaponize this experience.

He attached said sproinger to an activation arm, mounted it to the ceiling, and powered it with an Arduino microcontroller to give it voice activation powers via Google Assistant. Now with the voice command "hey Google, turn on the TallyWhacker," the arm bar rolls, the tally is thusly whacked, and the upstairs neighbor presumably begins drafting an email to the landlord. To add a bit more fun to the process, the arm bar will oscillate randomly for between five and thirty seconds.

It's an ingenious act of petty urban audio warfare, but my favorite bit is the 3D-printed case the inventor added to the contraption, complete with a logo you'd expect to find on an "as seen on TV" product. It really gives it that professional touch. 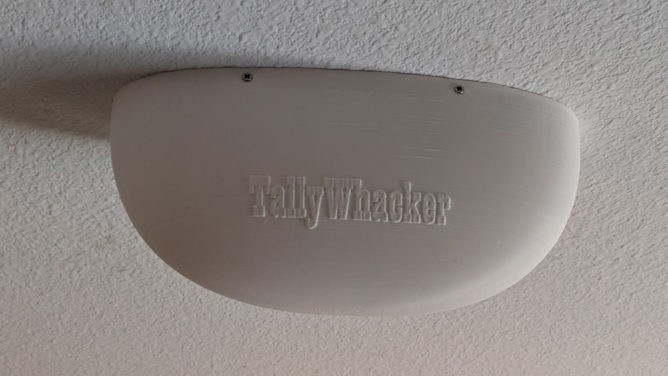 The inventor has posted his Arduino code publicly, along with the Google Home Assistant MQTT configuration, if you'd like to build your own. I can think of far more industrious uses for a weekend's worth of spare time, but few would be this satisfying.