There’s a dream I’ve had for years: a platonic ideal of consumer electronics. I dream of the perfect mobile writing machine.

I imagine a device that’s compact and light enough to carry anywhere, without the need for supporting hardware, and which differs enough from a conventional laptop or desktop interface to let me focus entirely on writing. With all that included, it needs to be powerful enough to run multiple applications at a time: a word processor, a small browser window for supplementary research, and a media player for music.

Since I’m also a fan of mechanical keyboards, as are many self-described writers these days, a tablet + wireless keyboard combo is part of my ideal. (Yes, the keyboard counts as "supporting hardware." No one ever said dreams had to be consistent.) If I could get a tablet, or perhaps a convertible laptop with its fold-back screen, and an “endgame” keyboard, and I’d finally achieve portable writing perfection. Then maybe I’d finally run out of excuses for finishing off that second novel. 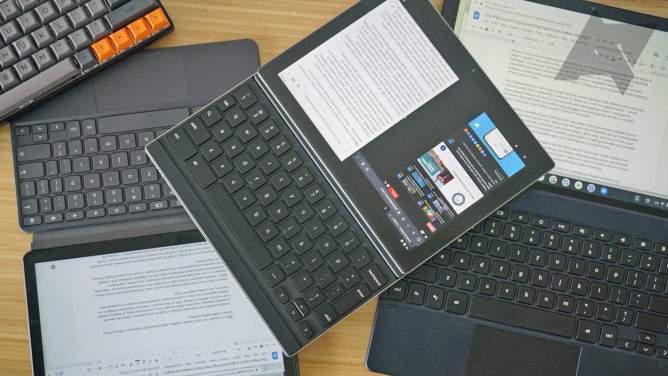 A string of Googley failures

As a dedicated lover of all things Google (at least where hardware and software are concerned), I’ve tried pretty much everything I could get my hands on. From the original Nexus 7, to the more powerful Nexus 10 and 9, to Samsung's excellent AMOLED tablets, to my beautiful and tragic Pixel C. I’ve tried the Pixelbook, the Pixel Slate, and various non-Googley Chromebooks like the HP x2 and the Lenovo Duet, even a couple of Windows devices like the Surface Pro. But I kept finding myself in between two poles.

Android tablets excelled at focus, forcing me to stay within a word processor (Google Docs or Microsoft Word) nearly all the time. Where they fell apart was in flexibility: ask an Android tablet to juggle a writing window, a browser, and a media player (typically a YouTube playlist) all at once, and you’re in for a bad time. Google’s own lack of innovation in tablets, particularly in creating a flexible multi-window operating system and courting tablet apps out of developers, is to blame here. 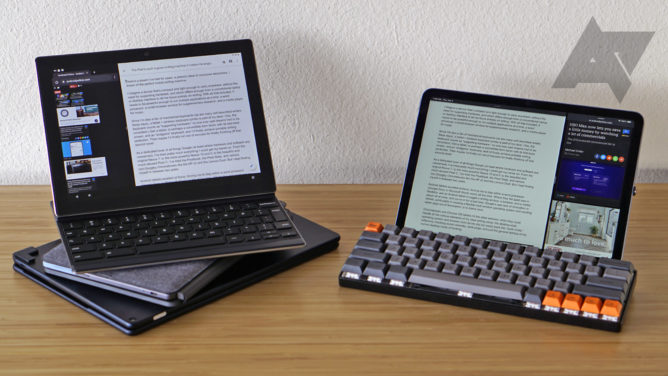 Chromebooks, Chrome tablets, and anything Windows-powered hit the other extreme. While they could handle all the various elements of my ideal writing setup, the desktop operating system and browser tools let me slip too easily back into “work mode,” reflexively checking social networks, work pings, and just the general detritus of my normal desktop mode of thinking. Even when combining these devices with my favorite keyboard, I couldn't get into that elusive writing flow.

When my editor told me we’d soon be expanding our coverage into Apple hardware and associated fields, I took the plunge and bought an iPad Air. While I’d dabbled in iPads and Macs before, the Air represented my single greatest investment of my own money (as opposed to hardware bought by an employer), and as such, I invested at least as much of my time in learning its ins and outs. That included trying out my platonic ideal of a portable writing setup. 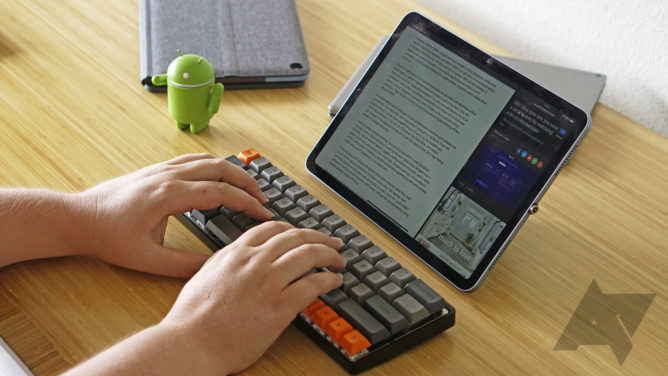 So I brought together three of my favorite on-the-go tools: my Moft stick-on tablet kickstand (previously covered), my Solo tablet sling, and my homemade Bluetooth mechanical keyboard, a Frankenstein project of several years. As it turns out, the iPad is the best device I’ve ever used for pure writing. Dammit.

iPadOS, with its many tweaks and enhancements over Apple’s phone software, handles two or three concurrent tools beautifully. Not just beautifully, in fact, succinctly, with an economy of effort that puts anything running Android to shame. Yes, Android can also run apps side-by-side, as I do with the iOS version of Chrome and Google Docs. But the iPad Air does it so easily, without the hiccups and stutters that are practically a part of Android’s identity. Two swipes is all it takes ... and forgive me for this, but it just works. 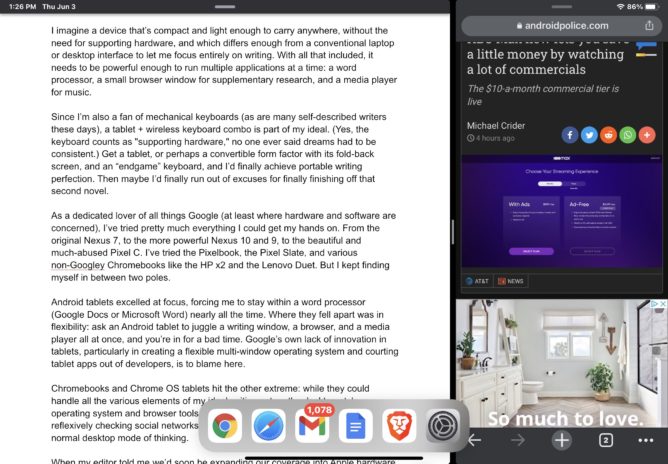 On the Air’s 11-inch screen, the interface almost melts away as the music starts playing, allowing me to focus almost entirely on what I’m writing. Despite a form factor and hardware that’s more or less the same as any Android tablet (and many Chrome OS tablets, now), Apple’s unrivaled focus on why and how people actually use its hardware makes it an experience that’s years ahead of anything Google or Samsung can manage. I understand Apple has been working on the multitasking aspects of the iPad's interface for a long time; the Air now allows you to pair a mouse, but for the first time in my years-long attempts at an ideal setup, I find that I have no use for one. Its touch interface is that good, even when paired with a physical keyboard.

It hurts me to admit this. I maintain that the Pixel C and its brilliant keyboard might have been the start of a form factor revolution. Even today I miss the elegance of that hardware combination: Apple’s wickedly expensive Magic Keyboard doesn’t come close to matching its simplicity and utility. I’ve tried more than once to revive my Pixel C with Lineage ROMs, and prove the form factor’s lasting viability, if only to myself.

But after a few weeks with the Air, my various Pixels and other tablets sit gathering dust. There’s simply no competing with Apple in this highly specific category. I admit that my own use case is a fairly niche one, and many will be better-served by a conventional laptop or convertible running Windows, MacOS, or Chrome OS. I wouldn’t dare use the iPad for “real work,” which in my case uses so many disparate elements that even Chrome OS can struggle to handle it. 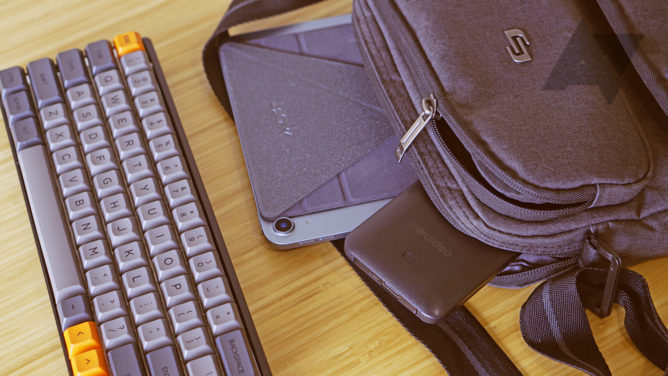 But when I buckle down for hours of focused writing, the iPad and my trusty keyboard are what I reach for. I’m sorry for all of my still-loved Googley tablets, and I’m sorry for all the time I spent trying to force them into a task for which they simply weren’t equipped.

Your Pixel could soon take time-lapses of the Milky Way