Google Pay was refreshed late last year with an all-new interface and a reworked direction. In addition to mobile payments, the app has expanded to support food orders, online shopping with exclusive discounts, and budget tracking. It's a big switch for users, and while many have likely adjusted to the new experience by now, others have stayed on the older, simplified UI. Unfortunately, time has run out for anyone procrastinating on downloading the new app, as Google has put one final nail in the coffin of the legacy version of Pay. 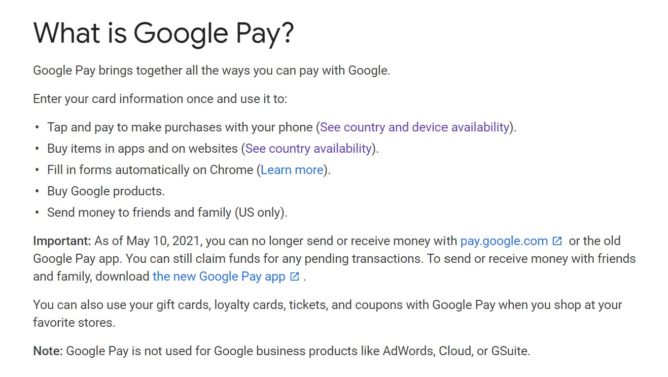 As of today, the old Google Pay app and website no longer allow for sending or receiving money in the US, leaving it left without much functionality. Users had initially received a warning about this upcoming change back in February, with an expected deadline of April 5th. Although it's been a month since that date passed, Google has finally made the change official on its support page as of May 10th. If you have a balance in your account, you can still claim your cash without any issues, but new transactions will require the refreshed app.

Since its launch last November, Google has been pushing its users towards the new Pay experience, even going as far as to launch a $30 credit campaign by completing various tasks. With the app officially out of beta, there's no reason to keep two versions of the software actively running in the US.

If you have yet to upgrade to the latest version of Google Pay, you can grab the app from the Play Store link below or download the newest APK from APK Mirror.

No more claiming money with the old app

Yet another change has appeared in the support documentation for Google Pay. As of yesterday, June 1st, it's no longer possible to claim funds sent to Google Pay via the older version of the app. 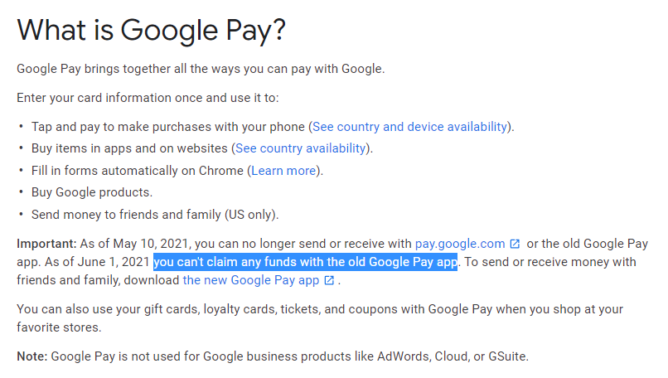 It's not an insurmountable issue; those who've been sent money via Google Pay merely need to upgrade to the new app in order to claim any remaining money. Which probably isn't a great comfort if you're actively trying to avoid the new Google Pay, but them's the breaks.