Firefox 89 for desktops comes with a brand-new interface dubbed "Proton" that brings along a simplified browser UI and toolbar, reorganized menus, a prettier new tab page, lighter iconography, and more consistent styling throughout. While Firefox for Android isn't seeing the same bold redesign as its desktop counterparts, a few of the new UI elements have still trickled down to the mobile version in Firefox 89, which has just started rolling out to phones. The browser also gains improved default cookie tracking protections for anyone using the private browsing mode.

As Mozilla announced, Firefox 89 blocks cross-site cookie tracking in private browsing by default. It's based on the "Total Cookie Protection," a suite of protection measures introduced back in February. In the past, you had to explicitly enable the feature in order for it to work in incognito tabs, but starting in Firefox 89, the cross-site tracking protections are enabled by default, no matter which tracking protection level you've chosen. The new effort joins existing measures that are meant to reduce the amount of personal data your browser shares about you while using private mode. It's unclear whether this new default behavior is exclusive to the desktop version for now.

The new design elements are mostly introduced thanks to new icons that make the UI feel more up to date, with an emphasis on thinness and outlines. They're available across the whole UI, starting with the address bar, the overflow menu (which has additionally been reordered), privacy settings, the tab switcher, and more. Mozilla also decided to remove icons from the browser settings altogether, which is a shame — they help find the correct menu entry more quickly. 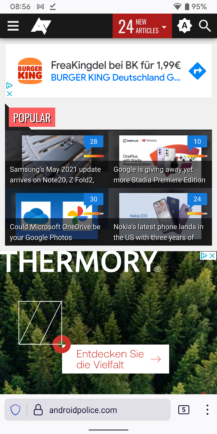 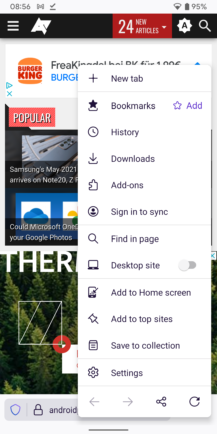 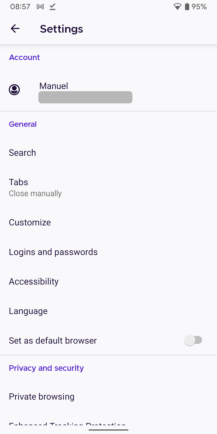 If you use Firefox on more than one device, you'll also appreciate the addition of a new section to the tab switcher: Synced tabs. These were previously tucked away behind a menu entry in the overflow menu, but the new position is right where you'd expect. There's another tweak in the regular open tab overview. Mozilla has removed the "select tabs" button at the bottom. You can still select multiple pages by long-pressing one and then tapping the others, though. That's useful if you want to bookmark more than one or save a few tabs to a collection.

The new tab page has also seen small tweaks. Your favorite websites' favicons are now much bigger, and a small icon indicates which sites are pinned to the page and which are dynamically added as you browse. 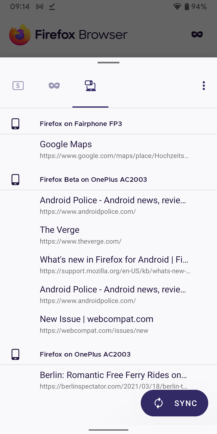 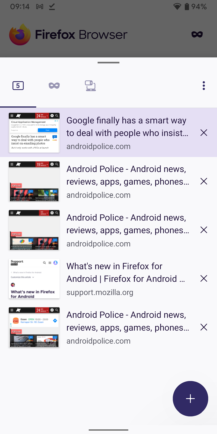 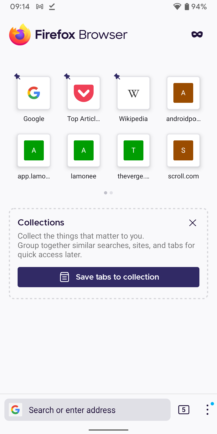 If you're a Firefox user, you've probably come across a site or two that just doesn't work well with Mozilla's rendering engine. During the Firefox 89 beta phase, it looked like the browser maker wanted to partner up with Web Compat to fight these issues. A new menu entry let you report pages to the open-source project that don't work correctly due to compatibility issues with just a few taps. The volunteers running the site were then supposed to triage the report and, ultimately, reach out to the site in question and ask for a fix — a neat idea that should help the web stay free and accessible for everyone. However, it looks like this menu entry is exclusive to the beta channel, as it's not availalbe in the stable version of Firefox 89.

Of course, Android Police works perfectly fine on Firefox — this is just what the process looked like.

Unfortunately, the latest Firefox version still hasn't received any new browser extensions in addition to the small existing collection of green-lit add-ons. You'll still have to use the Nightly version to get all the extensions you need.

In contrast to Firefox 88, version 89 also doesn't crash anymore when reaching the very top or bottom of a website on Android 12, which likely happened due to the new system overscroll animation.

You can download Firefox 89 from the Play Store, but we've also got it on APK Mirror.

This article previously covered the Firefox 89 beta release and has been updated to reflect that this version is now stable. We've also added details on the redesigned interface elements, which weren't available in the initial beta version.

The article has been updated to include the new default cookie-blocking policy for private browsing mode.

Google Photos is preparing some Material You design tweaks