Hangouts has been on the way out for four (!) years by now, but the service is still kicking. And in that process, Hangouts managed to reach an impressive milestone: It has been installed five billion times on the Play Store. That brings it right on par with a few pre-installed Google apps, but also with the two competing messaging products from Facebook.

While a lot of other Google apps have recently reached this milestone, Hangouts' win comes as a surprise as you should think that only few people are still downloading the app proactively. For what it's worth, it used to be pre-installed on Android for a few versions, just like other Google apps that reached the milestone before it, but these days, the app is nowhere to be seen on Android phones by default. That means that either a few people are still activating Android devices with the app pre-installed, or that there are indeed some left actively seeking out Hangouts as a communication platform (only one install per Google account is counted in the Play Store statistics). 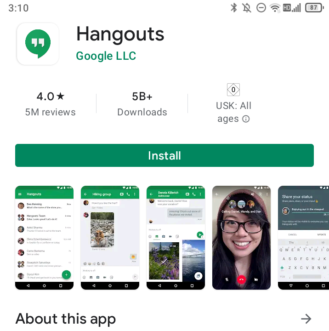 While Hangouts' death was first announced in 2017, it looks like the five billion milestone will be the last big win for the service. Google already killed group video calls on the platform last year, asking users to switch to Meet instead, and it deactivated location sharing. You also can't use the service to call landlines and mobile numbers anymore, with the company refunding credits. Hangouts is slated to be killed off completely in late 2021, when G Suite/Workspace users will be forced to switch to Chat and Meet, with no option to postpone the migration anymore. Regular folks will likely have to follow soon after.

If you're feeling particularly nostalgic right now, we can only recommend you read our Hangouts eulogy to indulge in the feeling a little longer.