Last year, Arizona's attorney general sued Google for illegally collecting location data from Android users, even after they had opted out of said data collection. According to recently released evidence and testimony from Google employees, the company intentionally made it difficult (and in some cases impossible) for users to find or understand the options to turn off location tracking. Beyond that, the evidence indicates that Google continued to collect location data via other means, associating it with users to achieve the same level of accuracy.

Recently unsealed documents reported on by Business Insider describe a deliberate disregard for user privacy within the Google Maps team. A particularly egregious example was Google redesigning its settings menu to make privacy controls harder to find, after testing new designs that achieved the opposite. According to the new evidentiary documents, Google viewed too many people actually using those privacy options as a "problem." Obfuscation was its solution.

Using a combination of data collected from basic use of Android phones, access to Google-branded apps like Google Maps, and even third-party apps that constantly share info with Google, the company was (and possibly still is) able to create internal user profiles that identify common crucial locations, like homes and workplaces. At least one senior product manager claimed that she didn't know how the various privacy settings Google did allow users to change actually affected one another, and a vice president of Maps told investigators that the only way a user could be sure to keep their locations private was to intentionally lie about them, manually setting those spots to different locations.

The documents outlined ways in which Google may have used more complex ways to assess a user's location, even when that user had successfully opted out of direct data collection. An internal slide from 2014 (PDF link) described a situation in which Google knew two users were in the same house, and extrapolated their home addresses based on Google Maps and Wi-fi usage even though both had explicitly opted out of location tracking, either on Android's main settings menu or via Google.com's tracking message on iOS. 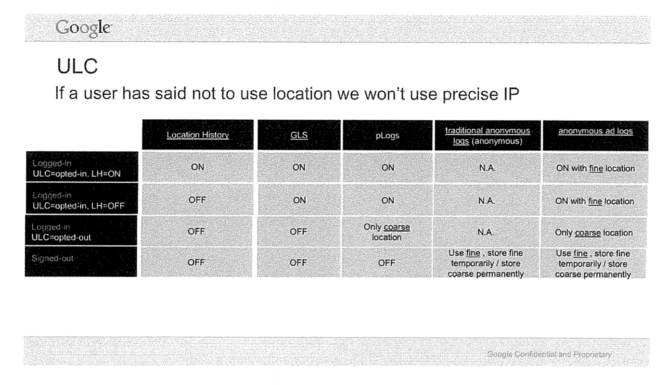 Google's eagerness for user data didn't stop at its own software or devices. Insider reports that Google pressured LG and other phone makers into hiding privacy settings in a similar fashion, even when using their own customized versions of Android. The language here is particularly damning: Google allegedly used "active misrepresentations and/or concealment, suppression, or omission of facts" in order to hide those settings from users. For the legal laymen out there: the court documents are saying that Google straight-up lied in order to keep access to user location data.

The latest batch of unsealed documents comes as a result of a freedom of information request from Digital Content Next and News Media Alliance. The documents available are still almost entirely blacked out due to the ongoing Arizona court case. But even the little that's visible seems to indicate that Google was actively trying to collect as much data as possible, getting around user requests for non-tracking in Android, individual apps, and/or websites with data gathered from sources where that user hadn't yet made the explicit request.

Google's hunger for user data is obvious: the company's products (and its money-making advertisements) depend on that data. The more deep and wide the data collection, the more detailed and accurate the profile it makes for individual users, and the more relevant and profitable the ads it creates. This extends to the user's relationships and proximity to other users, in an ever-expanding web of incredibly complex data, all laser-targeted to sell you goods and services. This isn't necessarily a bad thing (it's the mechanism that allows most of Google's products to be free, after all), but it's easy to see how quickly and how dramatically things can go wrong.

Under increasing regulatory pressure for its advertising business, Google is trying to come up with alternate methods for collecting data in less direct ways, but privacy advocates haven't been impressed so far. Apple has made its less strenuous collection of user data a point of differentiation for iOS, particularly in the latest version, which lets users more easily deny data collection to individual apps. Even in the years-old documents unsealed this week, Google employees are keenly aware of a widening gap between their company and Apple in terms of user privacy and control. One employee was recorded as saying "this may be how Apple is eating our lunch."

Asus ROG Phone 5 long-term review: Expensive but worth it