Google Meet has become an essential work tool for quite a lot of people in the last year, so it's no surprise that the company is pouring resources into making it better. Today Google showed off an upcoming web redesign, which includes a more flexible user interface that lets you focus on the important parts of the meeting.

Among the new features coming in next month's visual redesign are:

Google also says that the mobile versions of Meet will be given a Data Saver mode, presumably compressing video and audio even more aggressively to keep data usage down on metered networks. I'm especially excited for that "autozoom" feature, as I currently use OBS to crop my video so my coworkers can't see the shameful mess that clings to the corners of my home office.

Each of the features above was highlighted separately by Google, indicating that each one will roll out on a different timetable to Meet users around the world. But within two months, all of them should be added, with the obvious proviso that you must be a paying user to access the autozoom.

Some features rolling out to test users now

According to a new page on Google's Meet support hub, a small (very small) portion of users should be seeing some of the new features highlighted above starting this week. Specifically, just

Update: According to an update from a Google staff member yesterday, a full 25% of free users and 25% of rapid release Workspace domains have been updated. Thanks, Blusole!

Why the long pause? Apparently enough has changed in the UI that there are some pretty significant bugs in the system. In a rare look under the hood, Google is actually mentioning four such bugs: missing video tiles or captions, mirrored screen shares, flickering video on Chrome for Windows, and a blue outline on users who aren't currently speaking. 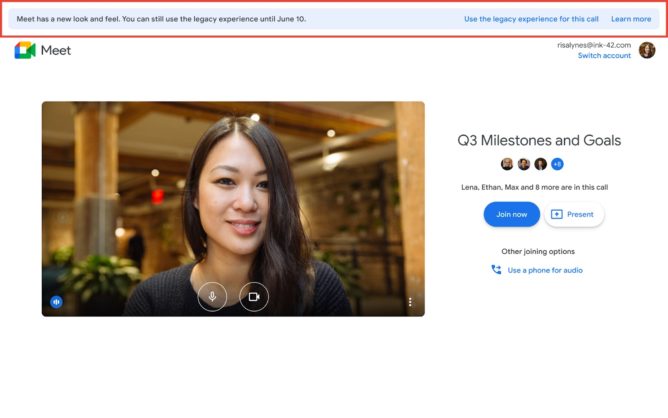 If you're okay with the occasional bug, and you happen to see the alert above the next time you're heading into a meeting, give the new Meet UI a shot. It'll be rolling out to the rest of us over the next few months.