Chromebooks have grown exponentially more popular over the last year, with Google promising more than 50 new laptops planned for 2021. With so many models available across various price points, manufacturers need to turn to the latest chipsets to squeeze out as much power as possible. Qualcomm is looking to follow up on its first lineup of Snapdragon 7c-powered computers with a refreshed chipset for the second half of 2021.

Like the first-gen release, the new Snapdragon 7c Gen 2 is intended for entry-level Chromebooks and Windows laptops, providing solid performance and excellent battery life in a thin and fanless design. Aside from improved clock speeds for both Cortex-A76 cores, it's not too different from the first-gen chip. This release is a mid-generation bump, with the same integrated Adreno 618 GPU for graphics alongside Wi-Fi 5 and LTE for always-on connectivity. Qualcomm promises up to 19 hours of battery life on any laptop supported by this new platform, making for a great daily driver. 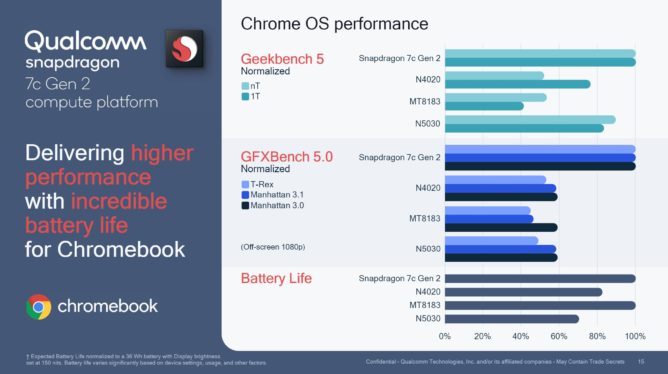 Compared to competing chipsets, this new Snapdragon 7c can outperform both the Intel Celeron 4020 and the Pentium 5030, two of the leading processors for low-end Chromebooks on the market today. Qualcomm's new chipset also includes improved image processing for a better video call experience. Meanwhile, the next time you're stuck in your fourth virtual meeting of the day, a brand-new partnership with Zoom will also deliver extra-long battery life to keep you from running for the charger.

While this new Snapdragon 7c might be more of a refresh than a generational leap in performance, it provides a good idea of what the next lineup of budget-friendly Chromebooks will offer for both performance and connectivity. Samsung and Lenovo among the companies partnering with Qualcomm to support its new chipset. The first Snapdragon 7c Gen 2 device will launch later this summer, with prices starting as low as $349.