Migrating WhatsApp is one of the most stressful things I've ever done. It is legit the main reason I take several weeks — perhaps months — to fully switch to a new phone. I have cold sweats because of my slow connection and I always pray for the local backup/restore function to work without triggering the online restore, so I can't even imagine what it's like when you're switching more than just a phone. Thankfully, though, the service is about to make the move to a new OS and phone number a little smoother.

WhatsApp can already switch to a new number rather elegantly, but only if you're doing it on the same phone. It's also working on a solution to move chat history between Android and iOS — a feature that's been sadly missing all these years. But now, the app is taking it a little further by combining both migrations at the same time.

The folks over at WABetaInfo were able to get this screenshot of the upcoming migration feature on iOS which asks users if they'd like to move their chats and media to a new Android phone and gives them the option at the bottom to transfer to a different phone number in the same breath. So you could speed things up and do both simultaneously instead of wasting time on two standalone processes. 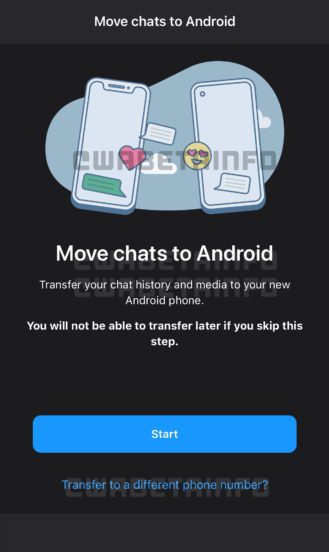 The new migration feature between Android and iOS isn't live yet, and neither is the option to switch to a new number along the way. For now, if you're only swapping numbers (and not phones too), you can always do it the regular way by going to Settings > Account > Change number.

The Google Messages emoji picker is getting a handy makeover