We got our best look yet at the upcoming Pixel 6 Pro yesterday — gone is the XL suffix, apparently — and now it's time to get a feel for the regular Pixel 6. Predictably, it's a smaller version (although not by much) of the Pro model with the same centered punch-hole selfie cam and the same intriguing horizontal rear camera module. Unfortunately, there's one less lens compared to the bigger phone.

These renders come once again from the reliable @OnLeaks, shared this time via 91Mobiles. They're based on CAD models, the type shared early with case and accessory makers, so we can be pretty sure that the dimensions and design, if not the colors and finish, will match up with the final product when it's revealed. Like the Pixel 6 Pro, it's got a boxy design reminiscent of a Samsung Galaxy Note with a horizontally aligned camera module on the rear that is not only a nice throwback to the Nexus 6P but will also eliminate wobble if you lie the phone on a flat surface without a case — a small but welcome improvement over most recent flagship phones with beefy, left-aligned camera bumps. While the 6 Pro has what appears to be a periscope zoom lens among its three rear cameras, the 6 misses this one out. Expect AI zoom similar to what we saw on the Pixel 5 instead.

The Pixel 6 will reportedly feature a 6.4-inch flat display (as opposed to 6.67 inches on the Pro) with an in-screen fingerprint sensor. There will also be bottom-firing stereo speakers, apparently, though we're not sure if the earpiece will also output audio outside of calls. Dimensions are pegged at around 158.6mm x 74.8mm x 8.9mm (11.8mm including camera module), which means this thing is bigger than the Pixel 3 XL — that's pretty damn big considering it's the smaller of the two Pixel 6 series phones. 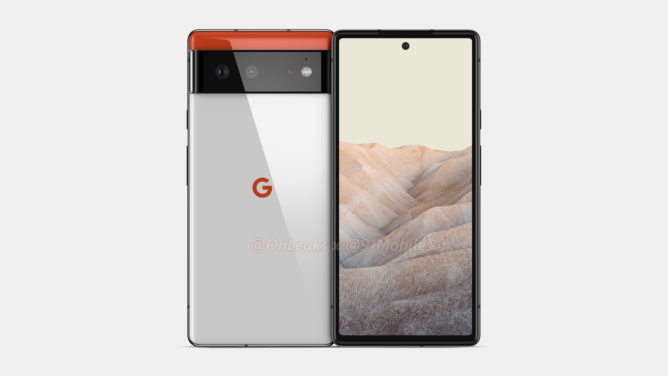 We don't yet know much about the phone's specs, but rumors point to the Pixel 6 series being the first to feature Google-designed silicon and it'll almost certainly ship with Android 12. A fall release is likely if Google is sticking with what it's done in the last few years, but we can expect to see much more of it before then — copious Pixel leaks have been one of life's certainties in recent years.

The Google Messages emoji picker is getting a handy makeover

Android 12's game mode shows its face in Beta 1, but you still can't use it