The Pixel 4 wasn't the best phone around, even when it launched, but it's still one of the best ways to get both high-end hardware and Google software straight from the coding oven. Today B&H Photo is offering the 128GB Oh So Orange version at $499, a whopping $400 off the original retail price (for the boosted storage model) and $200 less expensive than last year's Pixel 5.

Determining the Pixel 4's current street price is a bit tricky, since it's technically discontinued (though it should have a year or more of Google software support). You can get various refurbished 64GB versions in the $200-300 range, and some carrier models for the Pixel 4 and 4 XL are going for $350 over on eBay. And there are a few stragglers that are still offering the phone at a discount if you sign up for a new contract. But as far as a straight purchase from a reliable retailer, you're unlikely to do better than B&H on a phone this old  — the last time we saw a deal anywhere near this good was over six months ago. 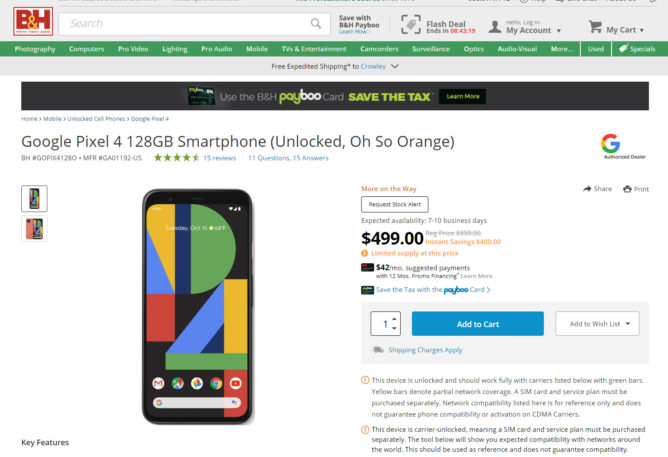 B&H is selling the striking "Oh So Orange" unlocked 128GB version of the phone, with shipping starting at $9 (at least to my Texas zip code). Since this is a new, sealed item, it should have the standard 1-year warranty. Move fast, the supply is limited. If you're already saving money on Pixel-branded hardware, why not throw in the Pixel Stand wireless charger deal we saw earlier today?