Google unveiled Material Design at I/O back in 2014. An overarching design system was much-needed — it brought consistency to Google's digital products and allowed developers to easily build apps that looked at home on Android and the web. It has evolved a great deal over the years, but the next major iteration is upon us and it's going to be the biggest overhaul since it launched. Material You, as the name suggests, is all about personalization, and it's coming first to Google Pixels with Android 12 later this year.

Google made it easier for devs to customize the look of their apps with Material Theming in 2018, and indeed many of the company's apps have since been updated with its own Material Theme. Even with what has been referred to as Material Design 2.0, many of the core elements remained unchanged, but Material You is going to be a much deeper reimagining. 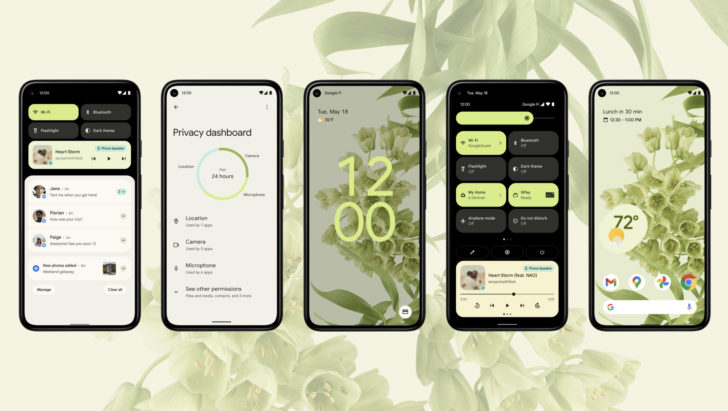 We're getting a ton of redesigned components along with new shapes, new colors, new lighting, and new animations. That means new toggles, big fat sliders, new button configurations... just about everything is being tweaked in some way. Android 12 will get all of this first, but we can also expect to see it rolled out to smart displays, Chrome OS, and across Google's apps and websites.

Android has matured immensely in recent years, but this new direction will bring some playfulness back into the equation. Pixels offer a wonderfully consistent experience but most people's phones look the same. With Android 12 and Material You, things are getting personal.

Wallpaper-based theming — or "color extraction" as Google calls it — brings bold color combinations to every corner of the OS. It automatically pulls out dominant and complementary colors and applies them to all of Android's screens, menus, and first-party apps. Don't worry, though, you can also set your own colors if you don't like what you see. 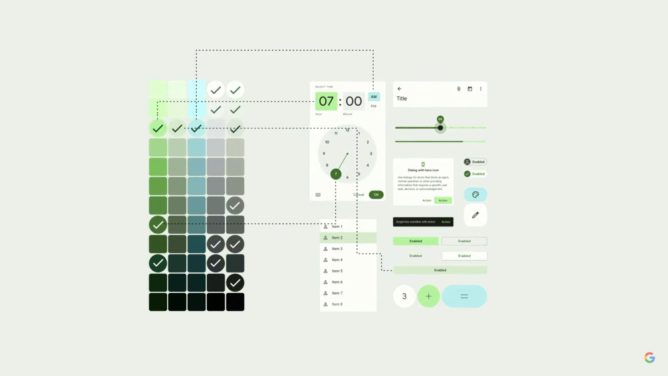 The end result is a thoughtfully deployed and consistent color palette that follows you everywhere you go — this should make your phone feel more unique than ever before. Your custom colors will eventually be able to follow you across devices, too, so if you use a Pixel phone, Pixelbook, and a Nest Hub, you'll have a fully customized experience across the board. With Material You, Google hopes to unify its software and hardware teams and dictate the look and feel of the company's products for years to come. Let's hope that we don't see the same slow, painful rollout as the Google Material Theme — it took several years to update some of Google's core apps to match, by which time trends had moved on.

When the stable version of Android 12 is released this fall, we'll get our first proper taste of Material You. The Google Sans typeface will be even more prominent, and many UI elements will be bolder and larger than ever. The default lockscreen clock will be unmissably huge, as will its slender sibling on the Always-on Display. Notifications, like everything else, will have a much larger corner radius for a friendlier look. Things like the little arrow to expand a notification will also be easier to spot and interact with — Google is really favoring clarity and ease of use over information density with Material You, and that's probably the right call.

Android users interact with the notification shade many, many times each day so it will be impossible to ignore the fact that quick settings tiles are now very rotund with more contextual information within each one. This means fewer on a screen, which will no doubt irk many, but it'll be much easier to see what's what. Your Google Pay cards and Home Controls will now be accessible via quick settings tiles instead of hidden behind the home button menu (this is now reserved for the Google Assistant). The notification section is now more distinct with its white background (at least in light mode) and Google is going to stop apps from customizing their notifications to look different from the default. Apple likely lit a fire under Google when it added widgets to iOS, and the Mountain View company has responded with a much-needed refresh of its first-party widget designs. Expect to see new clocks, new weather widgets, new shortcuts to oft-used contacts, and easier access to your favorite chats. And as well as making its own widgets look a whole lot nicer, a new Widgets API will help third-party developers create more attractive, consistent widgets themselves. 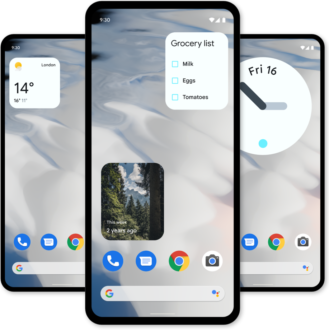 As well as refreshed static design elements, Material You will also breathe new life into animations in Android 12. We're going to get more fluid motion, more useful feedback, and a generally smoother feel across the OS. Little touches like the below shimmering ripple animation will make Android 12 feel more alive — you'll see similar feedback when you plug in a charger or hit the power button on the lockscreen. On a similar note, Material You elements are designed to be stretchable, so they can morph into whatever shape is required as you move around the OS. Google wants the UI to be more playful and fun to use, so it's not shying away from quirky little interactions here and there.

Another noticeable change comes in the form of page headings. Google has worked with Samsung on the new Wear OS, but it also appears to have borrowed a few design cues from One UI. Headings are now much larger and start a little lower down the page, making it easier to reach interactive elements position high in a list. Scroll up and the heading collapses to take up a smaller footprint and allow for more content on the screen, much like Samsung's Android skin does already.

Google hasn't forgotten about accessibility in all of this — the contrast, size, and line width of components can all be easily adapted by the system to suit the many needs of different users. Material You has been designed with every possible "you" in mind, it seems.

As well as giving us more choice over the look and feel, Google is keen to give us more control over our privacy in Android 12. There's a brand-new dashboard with an extensive history of every permission request and use, so we'll always know what our apps are up to.

Android 12 introduces a striking look, one that's sure to be divisive due to its whimsical use of color and shape, but it's hard to deny that it gives Android a more unified look than ever before. We can expect other Google products to be updated with at least some aspects of this new design language in the coming months and years, too, so let's hope it goes down well with users. What do you think about it?

You can check out some aspects of Material You as part of the first Android 12 Beta — with each additional version, expect Google to sprinkle more and more of its new design language throughout. For more information about the big Android 12 redesign, check out Google's blog post, and the Material Design blog has plenty more about Material You.

Gallery Go has been experiencing a recent surge in popularity

Android is about to take over your world all over again