Google is planning a radical design change with Material You. But it won't stop at the visual interface. According to announcements at the Google I/O developer conference, Android 12 will repurpose the power button in a way that's familiar to users of other devices. Long-pressing the power button will activate Google Assistant's voice control, at least by default.

The Google Pay and Google Home controls, available via a long-press of the power button in Android 11, will be moved to the Quick Settings menu in Android 12.

This change is bound to be contentious. Users didn't like it when Samsung did the same thing with its self-branded assistant program, Bixby, and many immediately changed the setting back to a standard power button. It's worth pointing out that Apple does the same thing on iPhones and iPads: long-pressing the power button on those devices activates the Siri assistant.

Speaking for myself, I'm hoping Google will include an option to disable this behavior, as they did with the Active Edge "squeeze" gesture in previous Pixel devices.

As expected, the power button-to-Assistant feature is live in the first beta of Android 12, released shortly after the I/O keynote yesterday. But surprisingly, that behavior is disabled by default. You can find it in the Settings menu (System>Gestures>Power Menu), with the toggle for "Hold for Assistant" disabled when you first boot up your phone. So far we're seeing this behavior on the Pixel 5 and Pixel 3a XL. 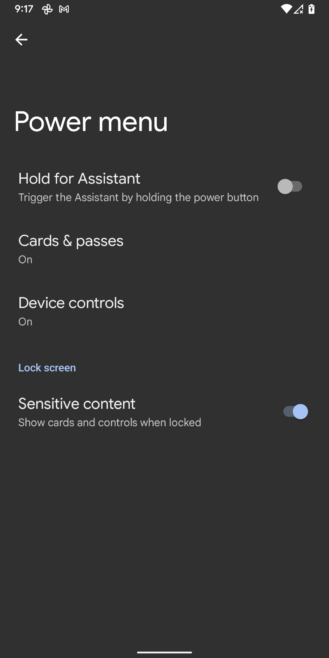 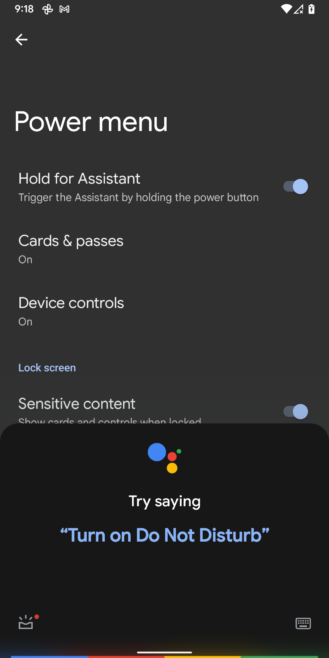 The default behavior, and the Assistant listener activated by the power button, with no other options.

Why is it disabled, when Google went out of its way to explain the new functionality in the keynote? To put it simply, it isn't ready yet. At the moment if you enable the toggle, long-pressing will activate the Google Assistant voice listener window. But you'll lose access to the current power menu, with its option to turn off your phone, reboot, or contact emergency services. (Google Pay and Home shortcuts are there too, for the moment.)

So if you enable the toggle, the only way to turn off your phone would be to hold down the button long enough to trigger a hard power cycle. Presumably this will be fixed at some point during the ongoing development process.

9to5Google spotted a dedicated software power button in the Quick Settings menu, which is also where some of the power menu functionality is headed, though it isn't working yet. I'm just hoping Google will keep as much of this behavior configurable to the user as possible in the final release.