Google Assistant is a crucial component of Android, easily accessible from your home screen — and soon, from your power button. While it's a robust tool in its own right, it only gets better with more third-party integration. Several new enhancements are coming to both Assistant and smart displays to help make getting the information you need a whole lot easier.

Starting in Android 12, all shortcuts will now automatically appear inside the Assistant gallery once built, offering a complete list of voice commands available for apps on your device. Shortcuts were first added to Android last fall and were pretty limited at launch, but this should help push the feature forward (even if it's still pretty similar to routines).

Assistant is also gaining access to widgets, which have been improved for Android 12. Once this feature ships, your phone will pull information from widgets to perform any action, like ordering coffee from the Dunkin Donuts app or displaying your mileage for the week in Strava, as Google highlights in its blog post. In addition, Google is planning to bring widgets optimized for driving to Android Auto in the future, allowing drivers to view more information from apps while keeping their eyes on the road. 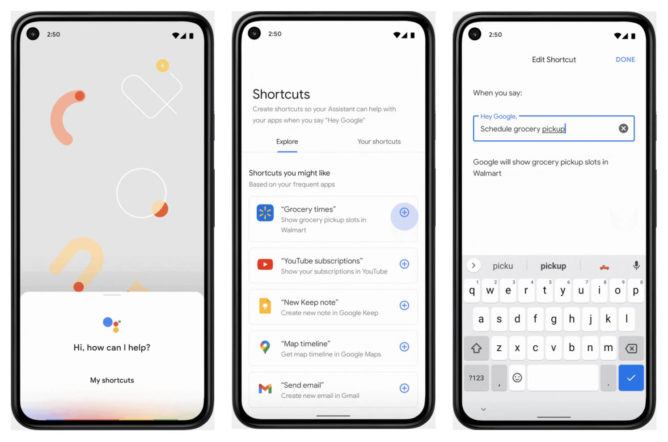 The shortcuts gallery in Assistant.

It's not just user-facing changes coming to Assistant. Google is also making skills easier to develop with Capabilities, a new framework API available in the Android 12 beta that lets users jump into specific portions of an app, like the camera interface or specific data entries.

Google is also improving the experience when using smart displays. Apps and games developed in Interactive Canvas can now enter full-screen mode, hiding the header that runs along the top of the screen. TTS will soon stay active while users are touching the device, and on-device credit card entry is also coming to smart displays to allow users to make transactions without a smartphone.

Overall, these small changes add up to a much-improved experience for both Assistant and smart displays, especially as developers take advantage of Google's new tools for their software.